The wait for the next proper Ridge Racer title has been long, but Unbounded is finally here, and it brings a surprise: it’s also for the PC. In this iteration, we’re to conquer races in Shatter Bay, build our own tracks, and compete with others online. Oh – and to act like a hurricane to wreck as much as we possibly can.

Like first-person shooters, racing games are a dime a dozen. But despite that being the case, there are few series as aged as Ridge Racer, with its first title having been released in 1994 for the PSone. The first RR title I played was Rage Racer, released in 1996 and also for the PSone. Since then I’ve been a big fan of the series.

There are a couple of things that make Ridge Racer Unbounded a special release. For one, it’s the first proper RR game to come out since Ridge Racer 7, released for the PS3 in 2006. Second, it’s the first RR ever to be released for the PC. As someone who doesn’t play consoles much anymore, the fact that this iteration is available on the PC is exciting.

Of course, just because a game gets released to the PC doesn’t mean that it’s a “true PC game”. Ridge Racer Unbounded is in fact a console port, but for fans of the series, or racing fans in general who don’t insist on the best graphics possible, few are going to be disappointed. There’s a ton of eye-candy, and overall, the game world looks great.

There is one important caveat, however. There are virtually no graphics options to tweak. No AA to adjust, no AF to increase, no texture detail to alter… nothing. Sure, you can increase the brightness, but I don’t think anyone considers that to be a valuable graphics tweak.

Console portalitis aside, Ridge Racer Unbounded is sure to receive a mixed reaction by PC gamers. The reason is two-fold. First, if you’re someone who’s never been much into consoles, chances are you’re not familiar with this series at all. That can result in you having expectations that might not be lived up to. Second, if you’re looking for a Need for Speed clone, Ridge Racer isn’t it.

Ridge Racer is about as close to an “arcade” racer as you can get. The racing is often unrealistic, and the ease of drifting, unparalleled. But RR’s goal is to be fun and offer an exciting racing experience – not a realistic one. 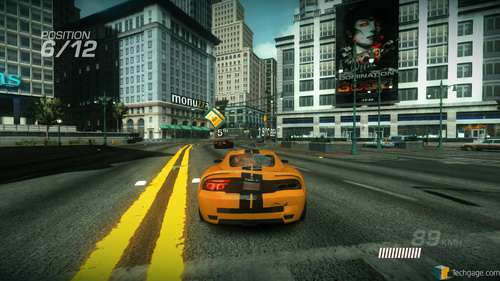 Even for fans of the series, Unbounded isn’t typical. While the driving mechanics are as expected (and quite good overall), the level of destruction has been cranked up in this iteration. The game comes off to me as a cross between Burnout and Blur, although weapons are not implemented (thanks for not going that route, Namco).

If there’s one thing lacking from most racers, it’s a good story. Unbounded doesn’t become an exception, and in fact, its story is about the simplest I’ve ever seen. At the start of the game, you’re briefly given a character backstory, and after that, you’re off to the races. Unlike Need for Speed games, which typically have “bosses” to defeat and then continue the story with the help of those, Unbounded has no such thing. Once you’re racing, the story is pretty much yours to make up.

Unbounded takes place in “Shatter Bay”, a city infused with similarities to some US cities, such as New York and Chicago. This city is split up into sections, each with their own sets of events. However, these districts can at times intertwine depending on the race, so while you may be entering a brand-new district, you’re sure to see landmarks from adjoining districts. 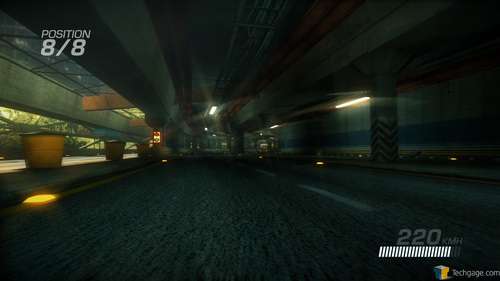 “Domination” is the most common race-type in Unbounded. It’s a standard race, but with the ability to knock-out opponents and also smash through certain buildings for shortcut purposes. “Shindo” races are also standard, but without those extra perks. “Frag Attack” are special races that avail you near limitless boost to take out as many opponents as you can within the time-limit, and finally, “Time Attack” speaks for itself.

Each district has at least seven races, and once all seven are beaten, you’ll have “Dominated” that district. In order to get into the latter races in a given district, however, you’ll need to perform well enough in the previous ones – it’s not only a matter of placing first. Your score can go up based on the number of opponents you take out, drifts you pull off, buildings you smash through and so on.