ROCCAT Isku FX – The FX Stands for ‘Features in eXcess’

At the time of writing, the Isku FX is ROCCAT’s range-topping keyboard. Appropriately it’s packed to the gills with features and capabilities lesser keyboards tend to eschew. No, it’s not a mechanical keyboard, but despite this is it still worth your hard-earned dollars? Read on and find out!

Although this might be an obvious point to most Techgage readers, I always feel compelled to say it with all mouse and keyboard reviews I do here: The ROCCAT Isku FX works perfectly well enough as a basic keyboard when you first plug it into your PC. Windows’ native USB drivers ensure that end users can expect basic functionality, so you can literally plug-and-play.

As with many “gaming” keyboards, to be able to take advantage of all of the Isku FX’s bells and whistles, you need to install a proprietary software package from the manufacturer. Generally speaking, it is usually best to grab the latest version of the software from the manufacturer directly here instead of taking your chances with what might be an older version supplied on a disk. Very smartly, then, ROCCAT doesn’t even bother to package a software/utilities disc in with its Isku FX, thereby eliminating the possibility of using an outdated (and possibly buggy) version. Instead, a supplied Quick Start manual instructs you to get the latest version from the manufacturer’s website.

Once you’ve downloaded and installed the Isku FX software, you’ll be greeted by a black-and-blue GUI onscreen. The presentation is as eye-catching as the keyboard itself, but it does look a bit… busy at first blush. To be perfectly honest, given some foreknowledge of the full extent of this keyboard’s capabilities, using the software to squeeze every last bit of its feature set felt somewhat intimidating.

Fortunately, the interface is organized well enough so that navigating through it is fairly straightforward. Basically, there are six main sections (represented visually on the GUI as tabs) to peruse: Main Control, Easy-Zone Control, Media Keys/F-Keys, Advanced Control, R.A.D., and Update/Support. Additionally, the Game Profiles section occupies the bottom of the GUI and is accessible no matter which of the six main sections is pulled up. 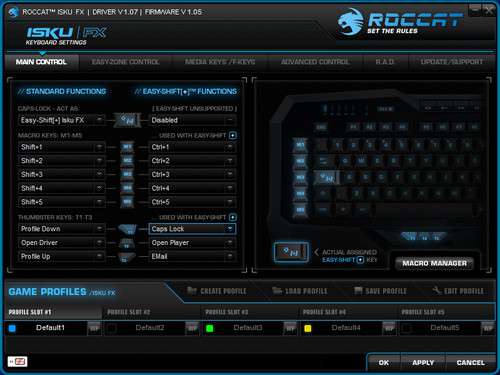 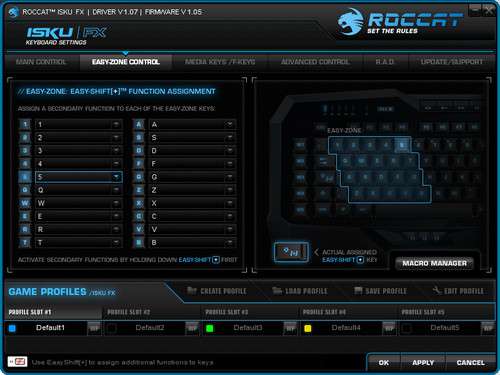 The Easy-Zone tab gives you access to designating specific functions to twenty keys in the so-called “Easy Zone,” which basically are four rows of five keys each accessible with your left hand. Keys 1-5, QWERT, ASDFG, and ZXCVB comprise the Easy Zone. There is a plethora of functions you can assign to keys in the Easy Zone, although “Make Me A Philly Cheese Steak sandwich” is unfortunately not one of them. 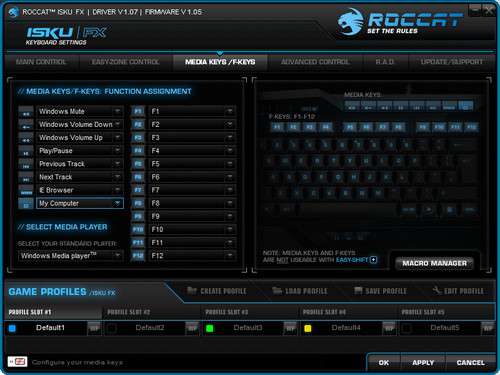 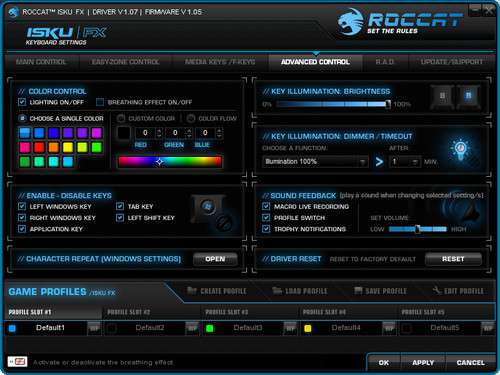 Advanced Control is where you can customize the backlighting of your Isku FX. ROCCAT claims the Isku FX can produce up to a stupefying 16.8 million distinct colors in the backlighting. Personally, I don’t think my eyesight is good enough to discern each one of these 16.8 million color variations; that, and the fact that I can’t count upwards of forty-nine. On the other hand, the fact that the keyboard can do more than two or three backlight options (say, Red, Blue, and Green) on its key set is pretty impressive enough to me. Somewhat unfortunately, though, the notification LEDs (for the active profile designator, NUM/CAPS/SCRL Lock, Macro Live! record, and Thumbster keys) never change from their electric blue. It’s not a big point for me, but I can understand if people might not like that too much. 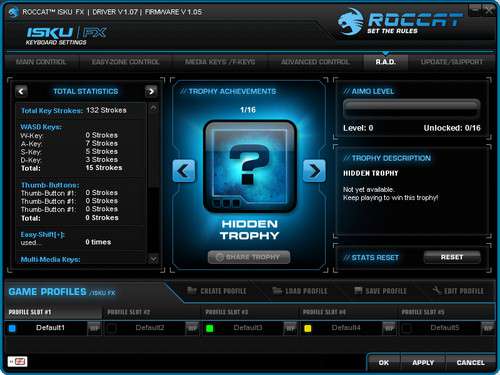 The next tab, R.A.D. (short for ROCCAT Achievement Display), is basically a key-press counter. It tracks how many times you press specific keys. It also shows you when you attain “Trophies” for certain performance thresholds. Key-press counters (and click-counters, for mice) are of dubious usefulness for someone like me, but I can imagine that truly hardcore gamers might find this useful as a tool to customize their keyboards’ configuration to a really refined degree. For example, for a certain game, if you find you’re relying on a certain command far more than others, the R.A.D. will tell you what key that is; then you can assign this function to a more accessible location on the keyboard so that you can get to it much easier than before. 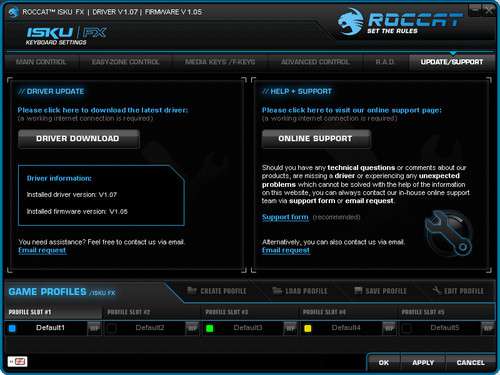 The Update/Support tab is where you find links to ROCCAT’s website for either driver updates or to be connected to the company’s support lines. You can choose from between having live online chat support (obviously, this requires an active Internet connection), filling out a support form, or emailing the company. 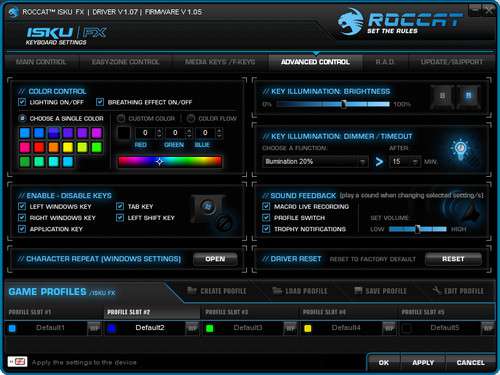 The Profiles section is where you can assign user profiles to certain sets of customized functions. For gamers, this is a good convenience feature. You can activate a user profile for a certain game, and all your customizations will be loaded just for that game. Then, after your gaming session, you can revert back to a relatively vanilla setup for your typical Windows activities.

Very early in this review I mentioned the “ROCCAT Talk” branding on the Isku FX. ROCCAT Talk is basically a software package that ties compatible keyboards and mice from the manufacturer together to enhance their functionality as a tandem. It requires downloading the specific ROCCAT Talk software, as well. Fortunately, I was able to test this feature using a ROCCAT-provided Kone XTD with the Isku FX review sample.

ROCCAT has done a superb job at integrating its hardware with its software packages. When used in tandem, it’s simply staggering when you realize that you’ll very likely have far fewer customization requirements than what the Isku FX can actually deliver. My only gripe in using the software is that there is a delay between the moment you click to save a reassignment of function, to when the software is ready for your next move.

Now that we’ve had a look at the Isku FX’s extensive software, let’s talk about how it is to use and wrap this review up.