Whether you’re a casual gamer who just wants to kill time and have some fun, a pro who’s at the top of the rankings after each round or one of the douchebags we laugh at on YouTube for throwing a hissy fit, we’re all looking for an edge. A leg up on the competition. A trick that will help us bag that elusive quindecaple-super-mega-death-kill that has so far eluded us.

To some, KDR or DoT are just a bunch of letters, while to others they’re something that they eat, sleep and breathe. Whatever type of gamer you are, we have the gear that might just give you the advantage you’re looking for. Today we take a look at a pair of peripherals from ROCCAT that promise tons of substance with some style mixed in for good measure; the Kone+ “max configurization” gaming mouse and Isku illuminated gaming keyboard.

The Kone+ is a refresh of the well-received original and has retained the overall right-handed look and feel, but there have been some improvements. It sports a 6000 DPI Pro-Aim laser sensor, 1000Hz polling rate, 1ms response time, 576kb of onboard memory and all of that cool stuff. We’ve all read specs before so let’s see if the mouse can back up some impressive numbers with functionality. 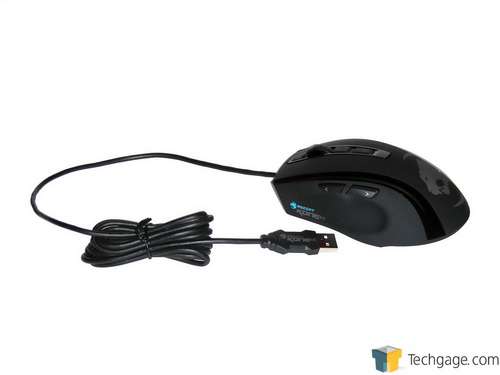 Most of the Kone+ is covered with a soft-touch rubber material broken up by the ROCCAT logo towards the back and two translucent strips that run front to back, which can show off just about any combination of colours. There is a 4D scroll wheel (up, down and side to side), standard +/- buttons above the wheel to make DPI changes and another small button in front that opens the Start Menu by default in Windows 7. 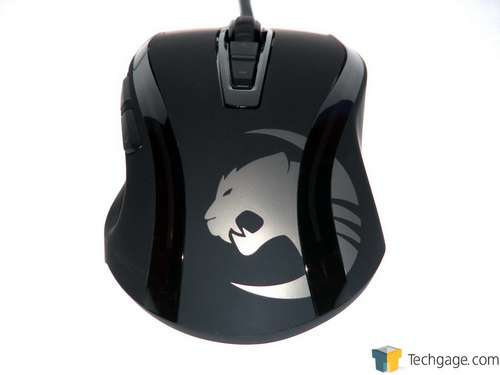 The left side of the Kone+ features forward and back buttons for browsing and a good-sized recess where the thumb can rest. Sadly there is no similar area on the right side for the ring and pinky finger meaning they’ll likely drag on the mouse pad. 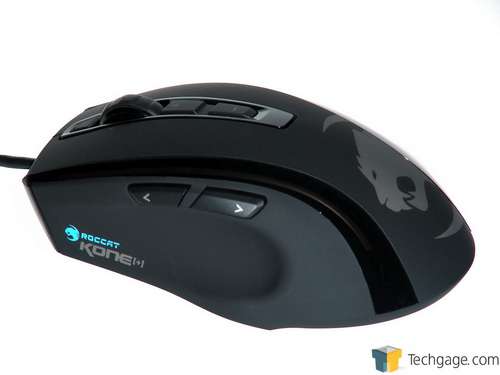 With the mouse turned upside down we see the meaty bits in the form of the Pro-Aim laser in the center. Around the perimeter are the feet that allow the Kone+ to easily slide over surfaces and towards the back is the locking cover where the included weights can be added for those who want just the right feel. 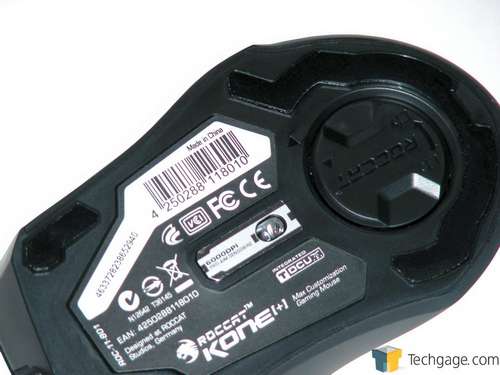 The four, five gram weights come in a small case where they can be stored when not in use. Just rotate the cover on the bottom of the Kone+ to the unlocked position, remove it, add the weights and put the cover back on. Nothing fancy here. 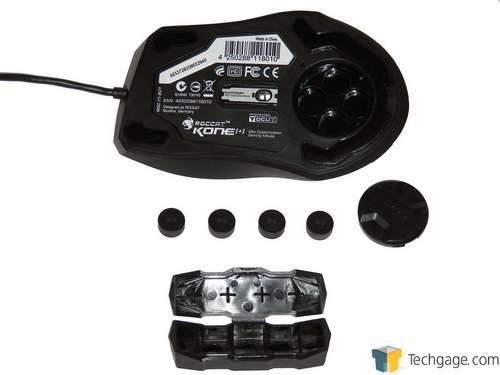 Moving onto the Isku keyboard, I have to admit that I was a bit overwhelmed. There’s a lot going on compared to a very basic gaming keyboard that I’ve been using. The Isku features blue illumination for all keys, on-the-fly macro recording, programmable dual function keys, up to five different profiles and the same polling rate and response time of the Kone+. One of the coolest features is called ROCCAT Talk, which allows a single key press to provide a secondary function to any of the mouse buttons. Let’s have a look.

The keys are the standard membrane type and provide a small amount of tactile feedback allowing them to travel quite quickly. Replacing the CAPS Lock above the left shift key is the EasyShift+ key. When held down this little beauty allows for any key in the EasyZone (1 to 4, Q to R, A to F, Z to V) to be assigned a secondary function. As mentioned earlier it even allows each button on the mouse to have a secondary function. Also tied into the EasyShift+ key are the vertical macro keys to the left labeled M1 through M5. 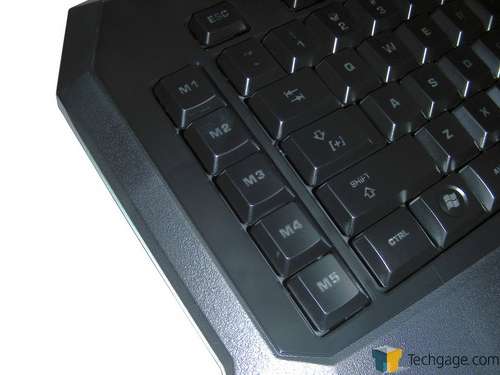 Located below the spacebar is what ROCCAT calls the Thumbster keys. These keys, which are labeled T1 through T3 give users a few extra buttons that can be accessed easily in the heat of battle. Want more options? These are also tied into the EasyShift+ key meaning there are tons of possibilities to tailor the Isku to suit just about any user’s tastes. 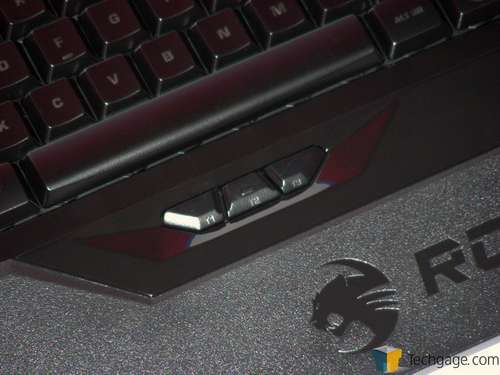 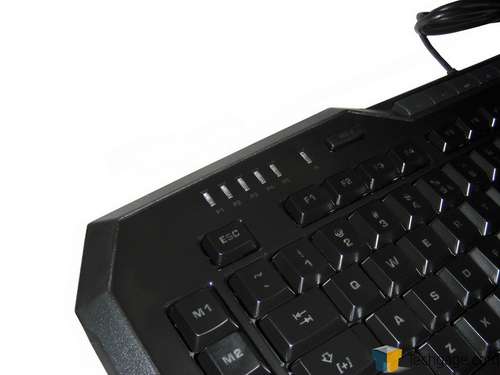 Further over are the media keys and just out of the shot is a button that allows users to cycle through five illumination presets meaning less time is spent messing with this setting in the software and more time can be spent gaming. 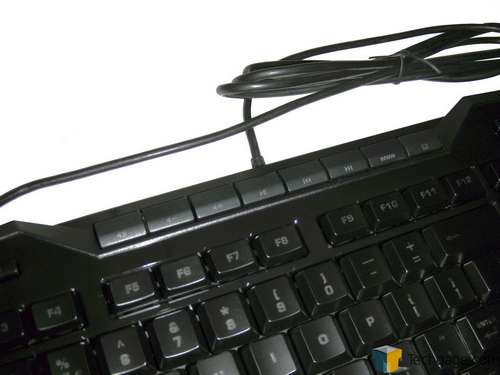 Under the keyboard are rubber pads in each corner to keep it in place when laid flat, rubber-tipped fold out feet to raise it up while performing the same function as the pads, and channels that allow the cable to be routed to either side or out the front. 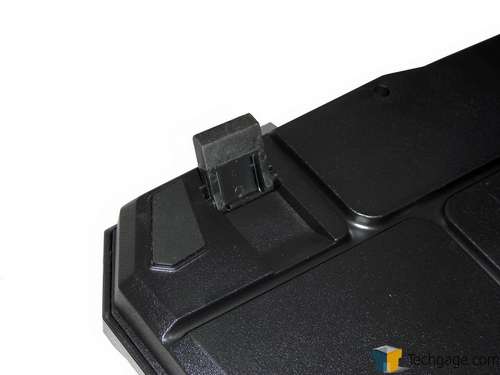 Included with both peripherals in a black fold out sleeve are the manual, driver CD and a numbered card that can be used to register the product with ROCCAT. 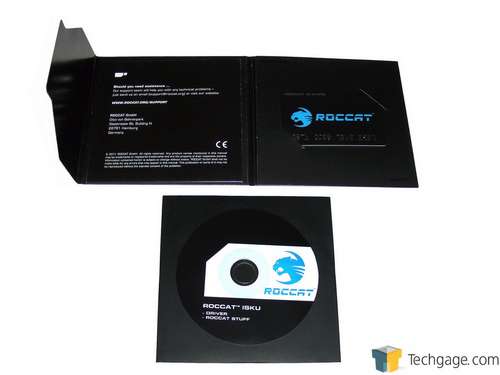 Now you know there’s going to be software to go with toys like these, and it’s something that shouldn’t be overlooked since it could make or break a peripheral. We’ll have a peek at that next.