While writing this review and during some heavy Battlefield 3 action, the pair performed great, even if I didn’t. The Kone+ tracked extremely well and sat very comfortable in my large hand. This mouse is on the larger end of the scale so those with smaller hands may find it a bit awkward.

The biggest issue that I had was with the placement of the button in front of the scroll wheel. It felt too far forward and required me to reposition my hand to reach it, which resulted in the buttons on the left side now being out of reach. Maybe my grip style is unorthodox and others will have more luck, but I ended up not assigning the forward center button any function. 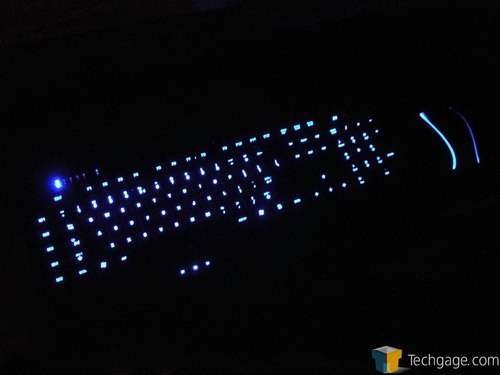 I was using a Cooler Master mouse up until now and found that it performs on par with the Kone+, but the ROCCAT offering moves across the mouse pad smoother even though it feels heavier in my hand without any weights installed. This extra weight makes the Kone+ a very sturdy mouse that should be able to stand up to some heavy abuse.

The Isku however is a bit of a mixed bag. On one hand you have on-the-fly macro recording, a ton of possibilities for assigning different functions to keys and the ability to store profiles. All very cool features and from a feature standpoint I found no problems since they all worked beautifully. Even the EasyShift+ key worked flawlessly to change the functions of my mouse buttons while knee deep in bullet casings.

I also found no problems from a performance standpoint. Subjecting the keyboard to typical and non-typical keystroke combinations resulted in the correct input with no blocked commands.

What I do have a problem with is the cheap feeling wrist rest. As soon as you begin typing you can tell how flimsy it is and a gentle press causes the plastic to flex. There’s very little chance of the Isku wrist rest breaking without some serious force but the feel certainly doesn’t fall in line with the rest of the keyboard and could turn some people off.

The other, and in my opinion larger problem is with the illumination, which is done with electroluminescent disks. Many of the keys do not light up completely unless viewed from directly above, which is far from ideal. If the keys were lit by individual LEDs this wouldn’t be an issue but the price tag would likely be higher.

Speaking of price, this pair will set you back a fair bit. The Kone+ is currently retailing for about $80 US while the Isku will set you back another $90. While I feel that this is a bit too high there’s no denying that I love the fact that I can switch between primary and secondary functions on the fly thanks to EasyShift+ on both the keyboard and the mouse thanks to ROCCAT Talk. This in itself offsets the cost for me.

Even with the above average price tag and shortcomings on the Isku, none of which came at the expense of performance, these are two feature-rich products with well designed software. I can’t wait to see where ROCCAT goes with its Talk functionality since it could could open the door to a whole slew of new possibilities.

A quick tip of the hat to the folks at ROCCAT who not only sent along the the Kone+ and Isku, but also the Kave 5.1 surround sound sound gaming headset. This great looking and comfortable little surprise doesn’t affect the outcome of the review, but I will say that I’ve had the chance to check out other surround sound headsets and this one performs with the best of them so it’s worth a look if you’re in the market.

Sept 11, 2012 Addendum: A few months after having used the Kone+, it’s begun to display problems that have rendered it broken. You can read more about it in our thread below.