Removing the front panel gives a good view of the two front fans. As mentioned, there is room for another optional fan but only if three of the four 5.25″ drive bays are not used. The bottom three bays have break away but reusable covers behind the front panel and an extra fan can be mounted to them. These can be moved around so that the bottom bay can be used and the fan mounted above it, but if two devices are needed there will be no room. It’s hard to see in the photo but there is a fine metal mesh behind the entire front panel to keep dust out of the system. 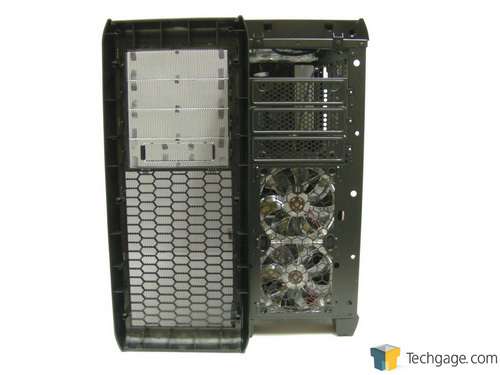 Swinging back around to the left side at the bottom front is the hard drive cage. This cage is broken up into three, two tray sections and each section features plastic trays that can accept 3.5″ or 2.5″ drives. If an alternate drive cage configuration is needed due to an extremely long video card, for example, there are five possible configurations. The top, middle and bottom sections are all removable giving users the ability to tailor their setup based on the components being used. 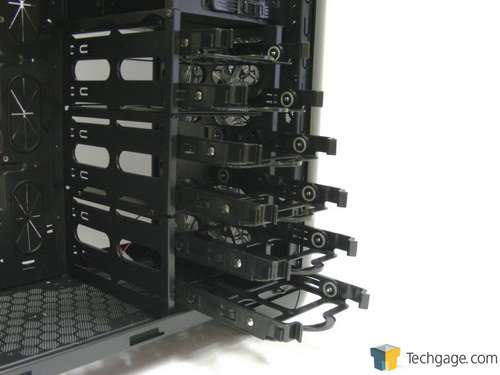 Above the hard drive cage are the four tool-less 5.25″ drive bays. As mentioned, the bottom bay comes with a 5.25″ to 3.5″ converter but all four have the same method of securing 5.25″ devices in place. 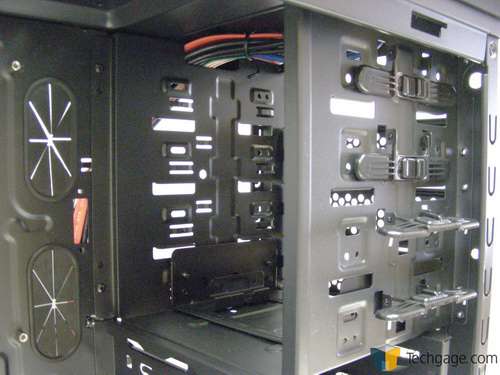 The bottom of the case has space for two optional 120mm or 140mm fans to be mounted in front of the power supply, however if two fans are to be installed the bottom section of the hard drive cage has to go. Oddly enough, the official specifications make no mention of a second fan being possible but the screw holes are clearly there. The power supply area at the very back has a Velcro strap that goes around the unit to help keep it in place during transportation. When installed, the unit rests on four small foam pads and the same foam can be found around the rear opening to help absorb any vibration. 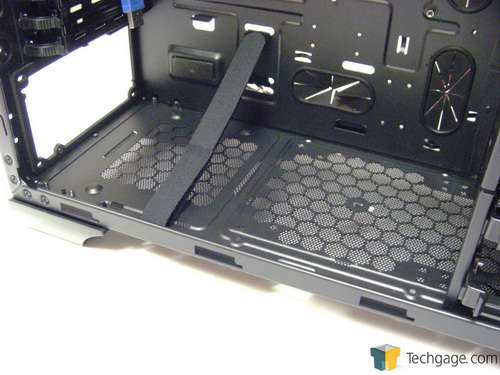 Up next is the motherboard tray that allows for some tidy cable management thanks for the areas with pre-installed rubber grommets down the right side and at the bottom. Data and power leads can be fed through these to keep the inside looking clean and leave airflow unimpeded. The tray also features is a large cutout to help with the removal and installation of CPU coolers that feature a backplate and there is also a smaller cutout in the top left corner for the fan and 12V power leads. From the factory the Blackhawk comes with the motherboard standoffs pre-installed for ATX motherboards. 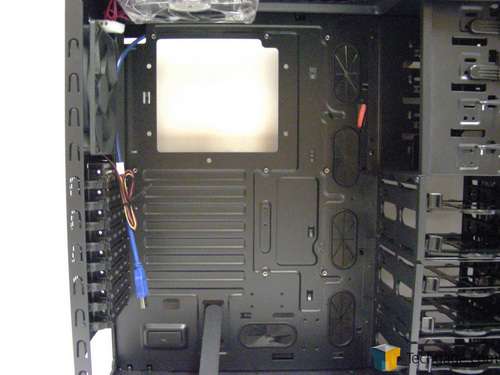 The rear of the interior showcases the tool-less PCI slots. The rest of what is found here was mentioned earlier when looking at the exterior but this time around there is a better view of the USB 3.0 cable that runs from the top panel. 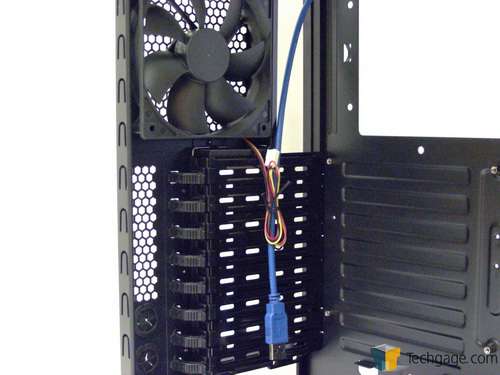 The top of the case has the 140mm fan but there is also room to mount another optional 120mm or 140mm fan for extra cooling. 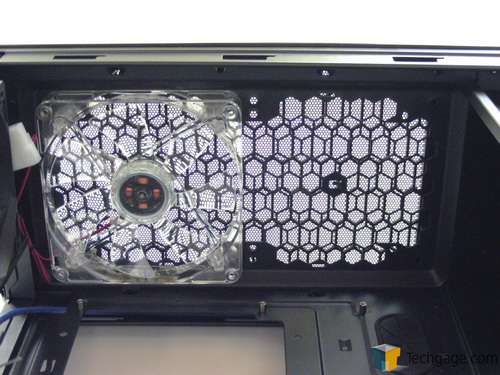 The back of the motherboard tray shows off most of what can be seen from the other side. The data cables have been secured at two points next to the cable management areas to keep them snug and tight. There are also metal loops in various places to help keep hidden leads in place. This is great because there is very little room to tuck cables. With just under half an inch or over a centimeter of clearance, some creative cable management may be needed. 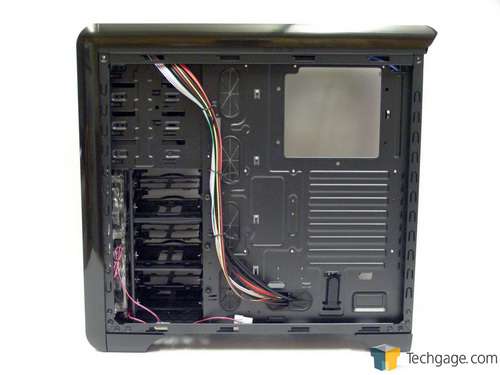 One thing I wanted to show so it isn’t missed in the overall shot are the three thumbscrews that help hold the three sections of the hard drive cage in place in conjunction with the two found on the bottom of the case: 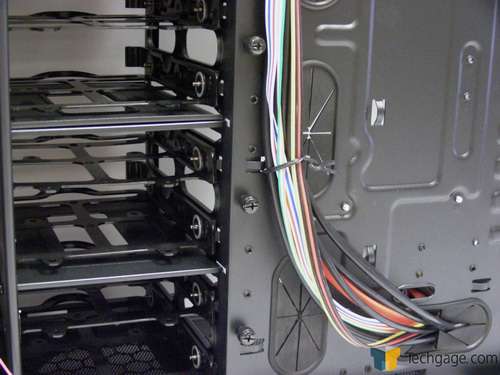 Included with the chassis is a bag of hardware that comes in an overly large cardboard box. Inside are the manual, two cable ties, a speaker, a metal loop that allows for the left side panel to be locked and a bag that contains extra motherboard standoffs, screws for the motherboard and power supply, screws for 3.5″ hard drives and 5.25″ devices and screws for 2.5″ hard drives. 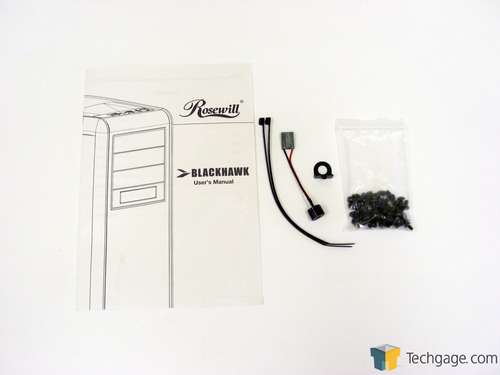 So far the Blackhawk looks like a winner to me, so it’s time to see how the case fares during the build and how cool it keeps our overclocked components with its large number of included fans.