The motherboard installed without any problems and when it came time for the power supply, the unit slid into place nice and flush. However, the review sample was missing one of the foam pads that it would rest on.

There were also problems with running leads through the nearest opening in the motherboard tray – I could not keep that rubber grommet in place no matter how careful I was, likely due to the sharp angle that the leads needed to be run at. This put extra strain on the grommet and it pulled away from the motherboard tray. Even without cables run through the opening I couldn’t get the grommet back on for some reason, so after 15 minutes of trying it was pulled from the system. 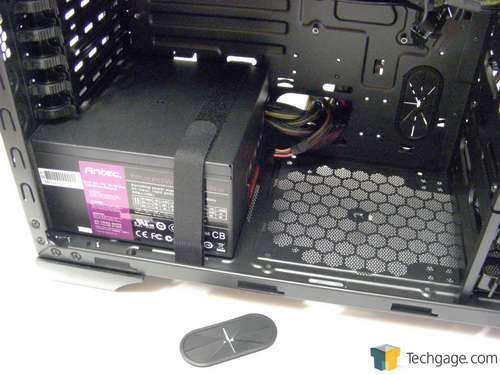 Hard drive installation was easy enough with 3.5″ drives simply snapping into the tray and held in place by metal pegs surrounded by rubber to help absorb vibrations. A 2.5″ drive used for demonstration was installed using four of the included screws to secure it from the bottom. 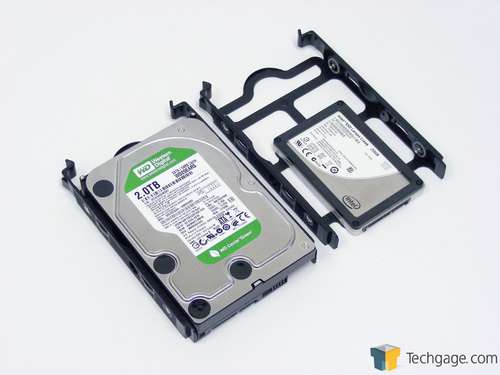 To ensure nothing is overlooked during a case review I always test out each feature, even if it isn’t required during the build process. One such feature is the sectioned hard drive cage. To remove all sections there are the two thumbscrews on the bottom of the case and three more behind the motherboard tray. On the left side of the drive cage are four standard screws holding the top two sections in place along with another six that need to be removed from the front through small openings in the frame of the case and are only accessible with the front panel off.

This is far too inconvenient for those who regularly switch their configuration and far too intricate for those who may not have a steady hand or at least a screw driver with a magnetic tip. Putting the screws back in through the small openings was a pain as well when the frame obstructed my view. If you didn’t like the game Operation, you won’t like this any better. 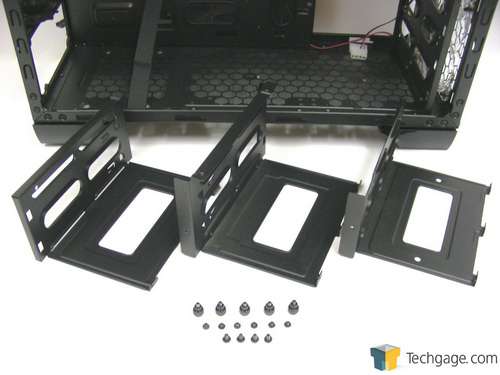 Expansion cards such as GPUs, soundcards or network cards are all intended to be held in place by using the plastic retention mechanisms. Each is opened by pushing in on the rounded area until it clicks. It can then be swung open and closed up when the card is in place. That’s how it should work, but not how it actually works.

As you can see, it simply cannot engage and lock anything in place because it does not have the clearance thanks to the plastic shroud over the GPU heatsink. This is not a new design on GPUs so this should have been caught during the design phase. It’s best to go old school with some trusty screws if cards do not lock into place. 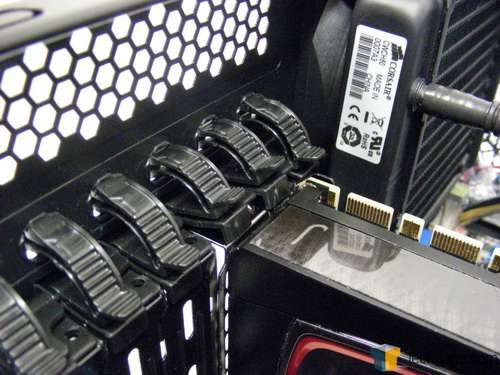 The optical drive installed without issue as well although it felt pretty tight. I could not tell if it was because of the bay itself or if the drive was contacting the wires that hang down ever so slightly from the top panel. Pulling back on the latch and lifting up disengaged the locking pins and once the drive was in place it swung back down and pushed forward to lock it in. There is absolutely no forward to back movement once the bay is locked. 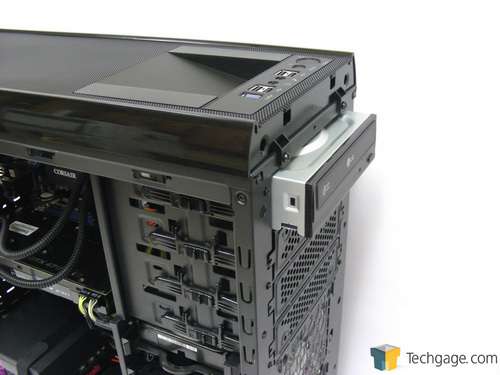 There were no issues with the hot swap bay on top as it picked up the drive instantly. Slide it in and slide it out. There’s nothing difficult about that. I like the fact that the drive sat secure but not to the point where excessive pulling force was needed to remove it. For some reason, making fast, jerky movements with a mechanical hard drive just doesn’t appeal to me. 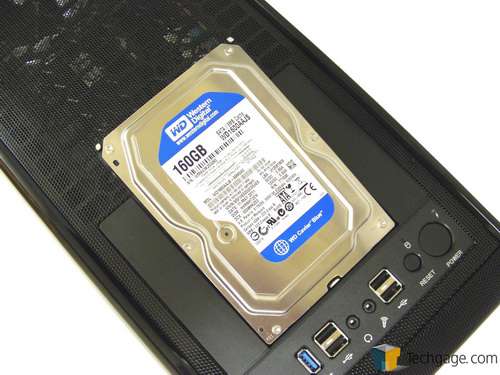 With all of the components installed, users will end up with something that hopefully looks like this. All cables were long enough to reach the intended connectors and there were no other issues to speak of until it came time for cable management on the back side of the motherboard tray. 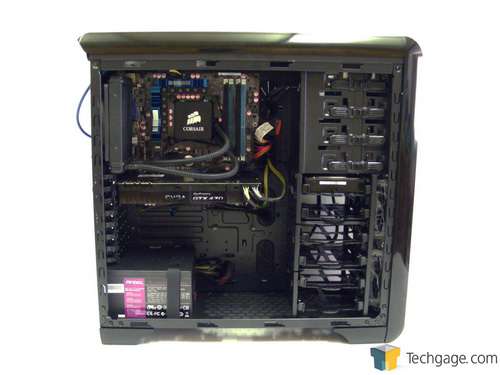 Here the Blackhawk threw a curve ball due to the limited space available. Most power leads can be hidden behind the hard drive cage but it was actually the 24-pin power connector that caused the problem in our build. The lead itself is so thick that it made for a very tight fit when the right panel was put on. After a few attempts, it did finally go on, but I don’t think I’ve ever seen a panel bow outward as much as this one did. 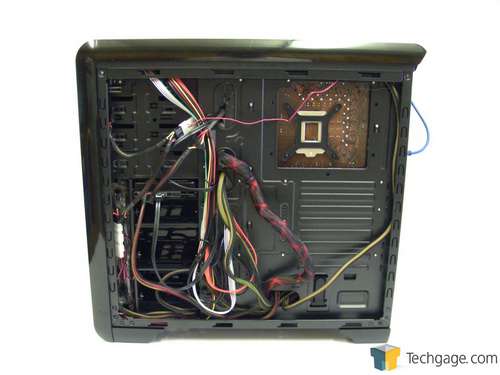 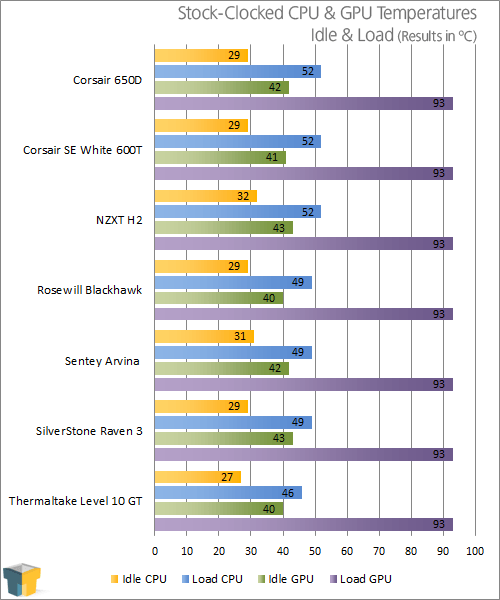 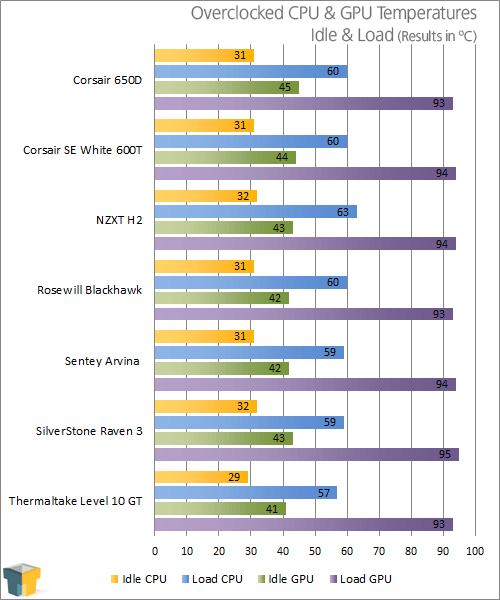 Luckily, the shortcomings of the Blackhawk are offset by the thermal performance. At stock it turns in numbers better than most with the exception of the Level 10 GT, but it does manage to hold its own when it comes to the GPU. When overclocked, the numbers are in line with the rest of the group with the exception again being the Thermaltake case.

When it comes to noise I found it to be a little on the loud side. Without sound measuring equipment I cannot give a quantifiable number but it seems to be the loudest case of the bunch, making slightly more noise than the Corsair 600T that may or may not have had a bad top fan. I felt no vibration through the case so I don’t believe that is the cause for the extra noise and will simply chalk this one up to the fans. It’s not intrusive by any stretch of the imagination but it certainly isn’t whisper quiet.

Overall this was a typical build with some twists and turns and finished off with a fairly happy ending thanks to the thermal performance. Next up is the thrilling conclusion to our story.