The hot swap bay is a welcome feature as is USB 3.0 support. Thankfully, companies such as Rosewill seem to be watching the market more and more and launching refreshed versions as new, useful technology is moving to the forefront.

What impressed me the most was the cooling ability. Our tests showed the Blackhawk coming in a close second to a case that retails for over twice as much. I guess that’s to be expected with a case that includes five fans.

Where the case starts to go wrong is with the PCI retention locks. This is the second case that I have looked at that has used plastic tool-less locks and it is the second case that has failed to be able to hold our GTX 470 in place. So far, thumbscrews have proven to be the easiest and most secure way to keep expansion cards locked down and I cannot see them being any more expensive then the method found here. 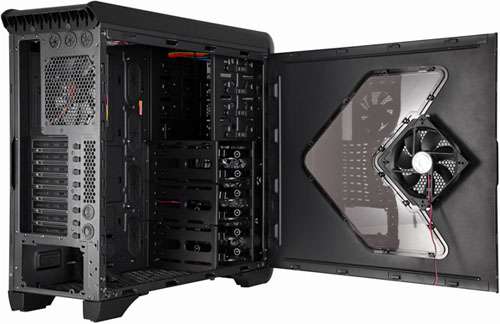 Adding and removing sections of the hard drive cage is another feature that left me wondering what the design team was thinking. It’s needlessly complicated but I believe it boils down to the fact that the cage comes apart in L-shaped sections and not as a full cage with a top, bottom and two sides.

To see if I could simplify things, each section was installed with only the thumbscrews keeping them secured, but there was too much movement for my liking, especially given the fact that the hard drive trays rely on the rigidity of the cage to stay locked in place. For those who rarely change their hard drive setup this may be a very small issue.

The final feature that fell flat for me were the grommets that line the majority of the cable management areas. A small bit of adhesive would go a long way in keeping these in place. I can admit that I stressed the area with a large number of cables, however many users want the cleanest build possible and I’m sure they would do the same.

$100 will score a Blackhawk, but that’s an awful lot of money for a case with what I would consider a deal-breaking flaw in the form of the PCI locks. For those who are more forgiving, this might just be the case they are looking for since it looks nice, provides a wide range of features and should be able to handle even the hottest components.