Zabaglione is an Italian dessert made with egg yolks, sugar, a sweet liquor (usually Marsala wine), and sometimes cream or whole eggs. It is a very light custard, which has been whipped to incorporate a large amount of air. Zabaglione is traditionally served with fresh figs and is sometimes also spelled sabayon.

There’s a new distro in town! Ok, kind of. Formally known as RR4 Linux, Sabayon is the result of a recent name change, but the core development goals are still intact. RR4 became a popular distro with those who wanted a Gentoo based system, but didn’t want to go through the laborious installation and configuration process. Whereas Gentoo delivers a base system for you to build on top of, Sabayon installs a complete desktop environments, including applications. The goal is to make the installation easy, and quick.

I use Gentoo on all three of my machines, so I guess I am a fan. However, I have never experimented with other distros based on it, but Sabayon recently caught my eye due to it’s colorful scheme. Throughout the article, I will be expressing experiences with an RC2 copy of Sabayon. RC2 is currently still in testing, and the final copy will be publically released on the 26th of this month if all goes according to plan.

Sabayon does not come on CD-Rom ISO’s, but rather DVD ISO’s. The reason for this is due to the mass amounts of available applications on the disc, including over 5 desktop environments. The disc will act as a Live DVD, which you can use just as you would if the OS was installed. Of course, from this point you will have the option to install onto your hard disc. I will get into all of this shortly. Let’s first take a look at what we are dealing with after booting with the disc.

Though I was unable to snapshot the boot screens, it was a rather lengthy experience. From the moment I started the boot sequence, I was ready to use the Live desktop in 7 minutes and 23 seconds. This is no doubt due to the mass amounts of support the distro supplies. From the getgo, you will have full 3D Acceleration support, and even bluetooth. One thing that scared me [literally], was the fact that KMix is near full blast, even off the live CD. So at 1:30am, I was not expecting the 20 seconds long distro intro sound.

Prior to logging in, you will have the option to choose from KDE, GNOME, Fluxbox, Xfce or Enlightenment. I chose KDE as it’s my environment of choice. 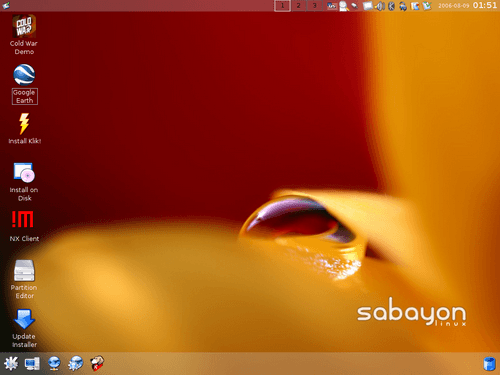 One thing you will notice, is that this is not your ordinary Live DVD desktop. If you feel like doing a bit of gaming, you can load up the Cold War demo, since your 3D capabilities are automatically configured. The same goes for Google Earth. You also have quick access to a partition editor and also the installer. If you are using an older installer, you can update it with a few clicks. Since Sabayon is not yet publically released yet, I was unable to test out that feature. 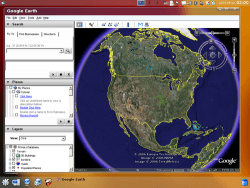 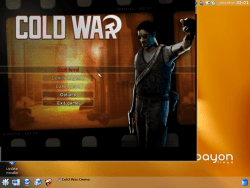 It becomes apparent quick that Sabayon does not believe in outdated software. We are equipped with KDE 3.5.4, which was only released a little more than a week ago! 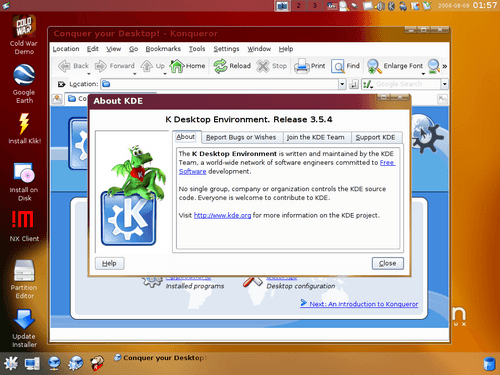 This is further evidenced by the up to date kernel (2.6.17), gcc and X version. I assume they chose to stick with a conservative X 7.0.0 due to the fact that we are still lacking NVIDIA drivers for 7.1. Here you can also see the various mounts, although they mean nothing after you install it to your physical drive. 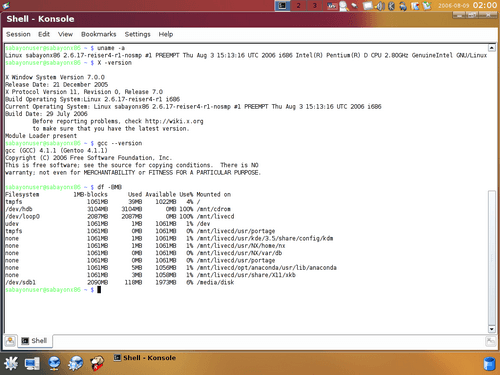 One thing you may have noticed by now is the special KDE theme. It obviously has a lot of borrowed features from Windows Vista, but works well. All of the window edges are transparent, and the background wallpaper will shine through. The transparent parts are even moreso see-thru than Vista though… you could read text through them. This special theme is only available through KDE, although the other desktops borrow some of the minor features. If you choose to use XGL, the transparency is gone, as it will completely take over.

Also found on the desktop is the Klik application, which merely opens up the website with instructions on how to install. I have never bothered with Klik before, but it may prove a good software installer for those who want it… similar to Freespires CNR. NX connection wizard is also there if you need to connected to a remote machine. 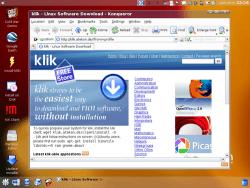 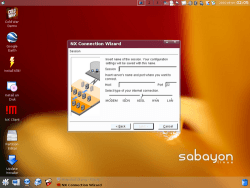 If you are in need of some partitioning prior to the installation, Gparted is kindly placed within reach. To install Sabayon, I was planning to use /dev/sda which was a blank drive, so I had nothing here to take care of. 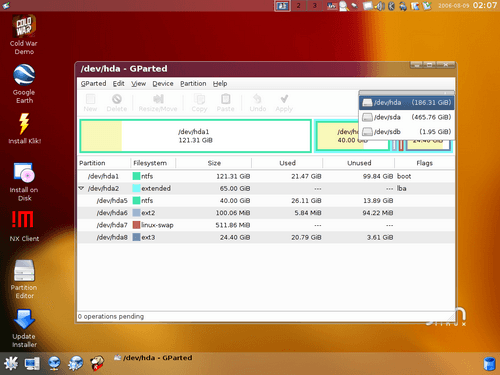 When I said that the distro includes plenty of applications, I was not joking. Case in point: 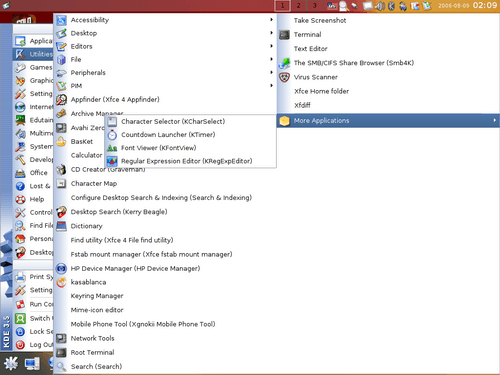 If you can find a program -not listed- that you would expect on a Live distro, I would be surprised. I could only find two of three applications not there, but they are specialty applications that you wouldn’t need on a live distro. It’s not just like this for KDE though… other environments include numerous specific apps also. Overall, this is one seriously packed Live DVD.

Upon looking in the Home directory, you are greeted with various Gentoo specific folders, including a Portage snapshot and Stage snapshot. In this case, Stages for x86 and i686 are included. When Sabayon is publically launched, there will be a seperate 64-Bit edition for users who are in need of it. 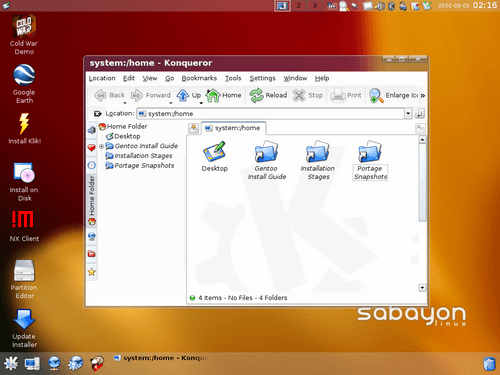 In some ways, Sabayon is the best Live DVD I have ever come across. It looks incredibly sharp and has superb hardware detection. My primary complaint would be that it -is- incredibly bloated, due to all of the installed applications. Though, this ‘issue’ has it’s highs and lows. If you are using Sabayon strictly as a Live DVD, everything is here that you need. If you are just using it to install the OS immediately, the bloated-ness is not going to prove a big deal.