We have been a fan of SabayonLinux for quite some time, so we could not pass up a chance to tinker with their heavily anticipated new version. In addition to updated software, 3.3 brings about a new color scheme. It’s also touted as being more stable, so let’s put it to the test.


I have a rule of thumb that if the Sabayon Live DVD works well for you, so will the installed system. It essentially carries over the settings you used, so as long as you don’t have any bizarre issues, you should be good to go, post install. This was the case for me… everything worked just fine.

The installed environment has a cleaner desktop than in the live one. Here you will still find the Sauerbraten and Wesnoth games, live chat and also Google Earth. Kuroo is here as well, and I will touch more on this in a few minutes. 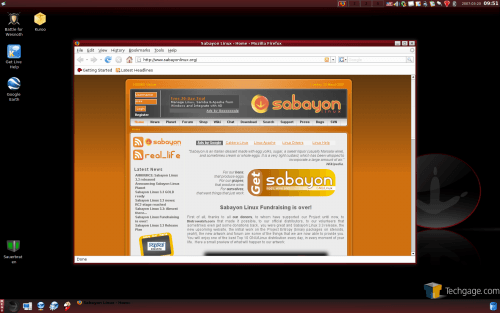 I will express a few opinions I have with Beryl. I am not sure why, but every single time I run it, I always run into issues. For this reason, I have no desire to run it on a full time environment. It’s fun, but not efficient. Beyond efficiency, I ran into a few show stopping bugs that at first, I couldn’t figure out.

First is the image below. You can see the console, but no frame around it. Meaning, I couldn’t close, maximize or minimize the app. I was unsure what the issue was, so I rebooted and the problem went away. However, I ran into the same problem soon after, and found the problem to be with Beryl. 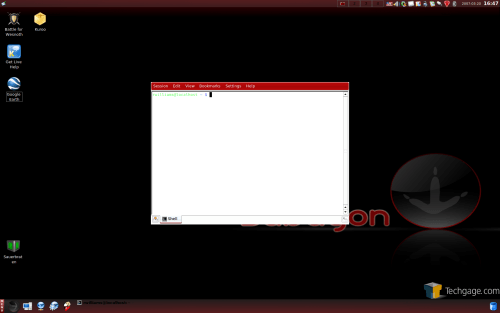 When right-clicking the Beryl emerald in the tray, you will see an option for "Reload Window Decorator". This solved everything, so I stuck with it for a while. Then while working on the system, something happened that I couldn’t screenshot. The entire screen became black, with only the top and bottom bar being visible. Everything could still be used, but you may as well be blindfolded. After this happened, I rebooted the machine and turned Beryl off. 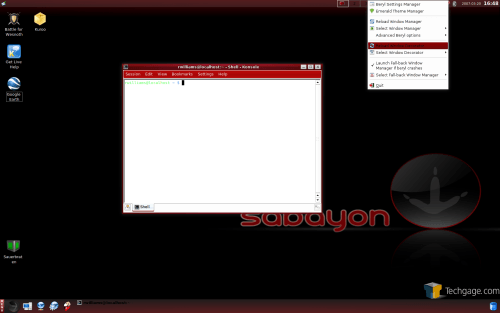 So while I think Beryl is a great tech-demo, it’s still not ready for prime time. It’s just far too prone to issues. Those aside, let’s get into the good stuff. Sabayon is known for including the latest software (sometimes bleeding edge), as you can see in the shot below. Included here is the latest kernel and latest stable version of GCC. Xorg 7.1 is what’s considered "stable" currently in Portage, but Sabayon includes 7.2. 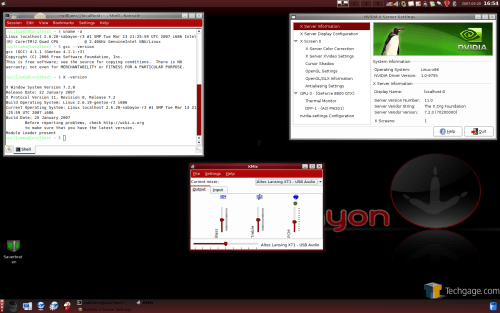 I was pleased to see the latest NVIDIA driver installed as well, which adds SLI (for what it’s worth) support for 8800 cards, as well as support for the new Quadros. As you can also see, my USB audio worked without a hitch.

One thing I have begun to wonder about Sabayon personally, is how it handles the software. As you probably already know, Sabayon is built upon Gentoo, which uses Portage as it’s software repository. I believe Portage to be one of the -best- out there, so I hardly disagree with it being included. However, it does lead to some small issues.

One common command for Portage is emerge –sync && emerge -uD -av world which updates all the software installed on your system… if there are updates to be had. Well, because SL installs so much software, this command is near useless unless you want to spend a little while fixing things up. Below, you can see running this command gave me a blocked package… not uncommon. 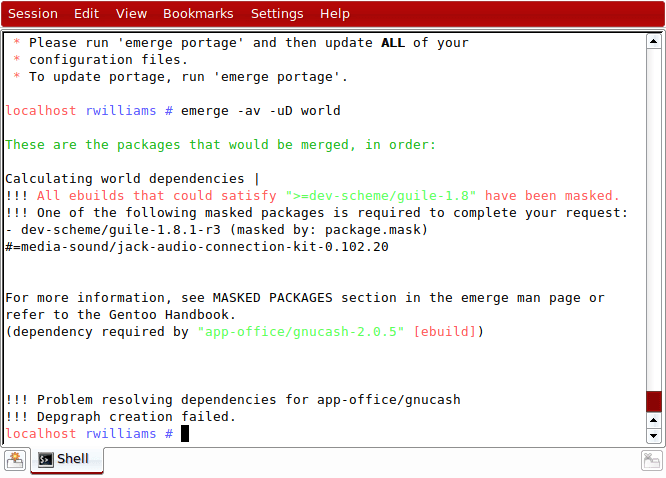 Once that program was unblocked, I reran the updater and received this: 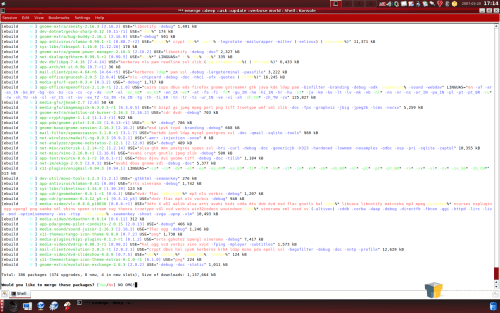 386 packages totalling 1.13GB! Bear in mind that the majority of this would not simply be downloaded and installed, but compiled as well. Therefore, on a very fast computer, you could expect this process to complete in just under… 8 hours approximately.

That said, Sabayons developers discourage use of emerge -uD -av world for obvious reasons. If you don’t want to put up with the mass amount of updates but still want to use that command, your option is to go through and uninstall all the programs you don’t want or need. This will take a long while, let me assure you. This method would be better suited for the Mini-Edition which installs less packages to begin with.

Your other option is to not use that command at all, but instead just updating the software you need updated, manually. This doesn’t take too long if you don’t do it that often. By default, the package.keywords and package.unmask files are full with entries, so upgrading should be as simple as syncing the repository and then emerging that app.

For an idea of just how much software Sabayon installs, I compared the installed software to my primary machine, which uses the official version of Gentoo. I use this machine full time, 12+ hours a day to do -everything- (except play games). On that PC, I have 796 packages (installed through Portage, not including manually installed ones). On Sabayon, there are a total of 1,900 packages installed by default. So it’s clear that there is likely to be many packages that you will not use.

It’s ridiculous to me to have -that- much software installed, but as I mentioned, that’s why there is a Mini-Edition. I gave it a bit of thought, and wondered why there was not a package selection during the install, like there is with SuSE or other distros. I thought about how Portage works though, and if I were a developer, I would not want to go through the headache. It -is- possible, but it would have to be done by compiling most everything during install, similar to what the Gentoo Live CD does. To save time, Sabayon includes binary packages of everything, which is why it installs so fast. But as it stands, there are far too many issues that could arise from having a package selection, such as broken dependencies. This is hard to pull off without the need of compiling, since Portage compiles everything that’s open source.

I could be looking at this the wrong way, but I believe it a package selection were possible with Portage, it would have been done already. If you don’t mind a PC with loads of software, then this will not affect you at all. If you like having a slim PC with only the packages you use, like myself, then you should be prepared to go through Kuroo or the command line to uninstall what you don’t need. In this instance, I prefer Kuroo simply because it makes uninstalling mass amounts of software all at once relatively easy.

Whew, that all aside, the core functionality that fans have come to love is still here. You pop in a DVD and it will prompt you to play it. Pop in an Audio CD and Amarok will recognize it and play. If you have a wireless internet card, you should be good to connect to your network… same with your bluetooth devices. One thing I did notice is that even though I don’t have a bluetooth device, the driver is loaded after install. In a way, this is a good thing -in case- you later purchase a bluetooth product. It would save the hassle of installing the driver yourself. One thing I did find odd was that KSynpatics was installed… which is used for touchpads. I am not on a laptop, so it’s virtually of no use here.

As I mentioned in the intro, I have been a fan of Sabayon since I first heard of it. The latest version only re-instills my faith in the distro, it’s one that keeps getting better. I’ve had my share of issues with earlier versions, but this one proved to be pretty error free. The only problems I really had were with Beryl and also my USB audio during installation. The only reason that issue confuses me is that alsaconf wouldn’t recognize it unless I disabled the onboard audio in the BIOS and then booted up that way.

The Beryl issues bugged me, but I don’t believe those to be directly related to the distro itself. Still, those issues are something you should look for in case you are going to use it as your primary desktop. The good thing is that it’s easily disabled, so if it gives you a problem, it takes two seconds to get it out of your way. 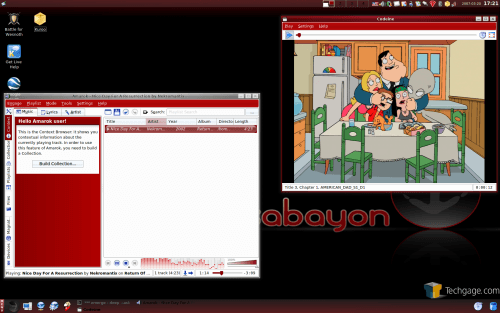 One thing I will also mention is that this to me, seemed far more stable than earlier versions. This entire article was written under 3.3, because I wanted to see if I would run into any quirky issues, which I didn’t. Once I turned Beryl off, the system ran like a dream. Easily one of the smoothest running desktops I’ve ever run. Everything was responsive, as it should be.

Overall I love the latest version. The amount of effort that goes into the distro is undeniable… even the little things are tackled. I took a look in the make.conf file and noticed that the options are set to enable dual core support on the compiler. I am running a Quad-Core machine, so perhaps in future versions, SL could detect that fact and adjust the flags accordingly. All of this can of course be changed after the fact, but many newer users to Gentoo wouldn’t know where to look.

Fans of Sabayon will be pleased. Things just keep getting better. For those who have never touched SL, you should give it a try and see what you are missing. Even if you don’t plan on changing desktops (like myself), it’s one of the best distros to play with, or use as a Live DVD if you are on the road a lot. I had a few people test it out on Apple computers, and it works great there as well. No one is left excluded! Kudos to Fabio and his team for the great work on this latest release.

As a last thought, I’ll also mention that the development team is always looking for donations to keep things going. So if you have enjoyed SL or use it as your primary system, please consider shooting them a few dollars to help them along.