Hardcore gamer? Have a need to create insane macros to get the job done? Saitek’s “Cyborg” Command Unit delivers! Although the hardware itself leaves a bit to be desired, the included software offers the ability to create numerous long macros to help you get the job done.

Today, we’re going to be looking at another product from Saitek, one of the world’s largest PC peripherals manufacturers. Saitek recently released their ‘Cyborg’ product line, targeting the PC gaming market. Funky aesthetics and logos aside, there are some interesting products here, particularly since Saitek has offered some very flexible programming software in the past.

We got our first peek at the Cyborg Command Unit at CES this past January, and were told that it could be programmed using Saitek’s SST software – meaning that every key should be programmable with macros of unlimited length, among other things. There aren’t many game pads like this on the market today, so of course we were happy to take the Cyborg Command Unit for a spin.

This is one peripheral that’s unlike most that gamers are used to. Instead of sticking to the standard keyboard as we’ve become accustomed, Saitek believes their special units, when used properly, could vastly improve your gaming experience, and maybe even your skill. It’s interesting, to say the least, so let’s get right to it.

There’s a few unique features that the Command Unit touts. First is the fact that it’s ergonomic, so it should prove comfortable for most people (or all) who use it. All of the keys are back lit also, and laser-etched, so that even during the heat of battle, there should be next to no fumbling. 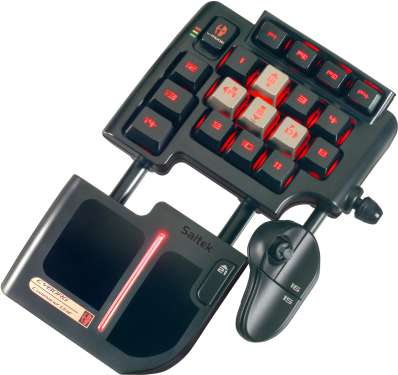 Saitek also wants you to know that the Command Unit is not only for First Person Shooters, but there is a toggle mode that allows you to switch to both “Strategy” and “Role-Playing Games” as well, so really, this might be a unit you’d be using more often than you think.

On top of it all, there are 21 buttons total, including the space and shift function, and a paired all together, having up to 144 programed commands is possible. Lastly, another feature that Saitek boasts is the unique thumb control area with 2-way tilt mechanism, which can slide front to back.

It looks good, but is it really the “Ultimate man-machine interface”, or worth your $40?

Once out of the package, there is not much to see besides the keypad itself. The unit comes with a driver CD containing the basic software drivers as well as Saitek’s SST software, which allows for more complex button programming and functionality. 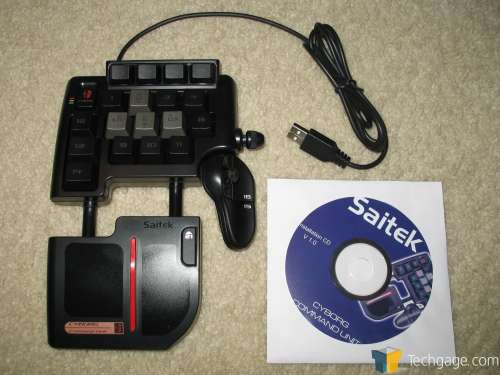 There are a total of 21 buttons on the Cyborg Command Unit, 18 of which are arranged similarly to the left side of a standard desktop keyboard. While this certainly won’t be setting any new trends in button layouts, I had no problems reaching any of the keys while keeping my hand stationary – even the F1-F4 keys are easily accessible due to the way they’re tilted. 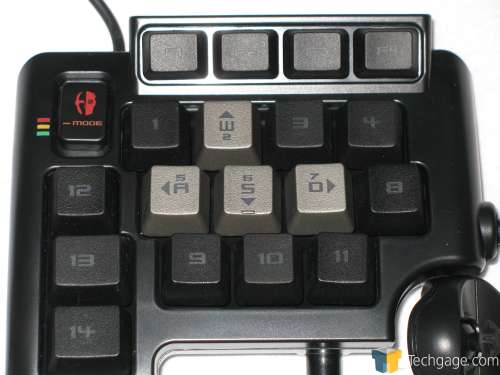 In addition to the keyboard buttons, there are two thumb buttons and a joystick, which are mounted in such a way that they can be rotated and extended/retracted slightly according to user preference with the help of a thumbscrew to hold the position in place once set. 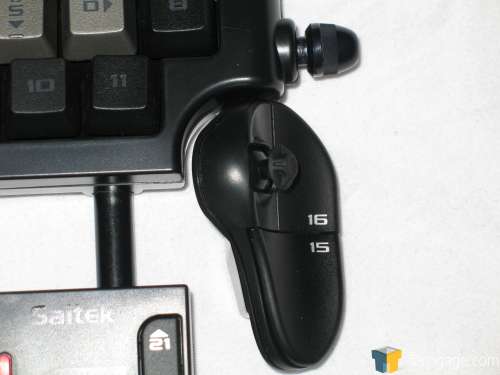 Next, button # 21 is mounted on the palm rest and by default functions as a custom ‘SHIFT’ key, which mislead me at first, because the Cyborg Command Unit didn’t come with any instructions. This key doesn’t act like ‘Shift’, but instead alters the function of every other key (if the user so desires) when held – effectively giving the user access to 40 different commands that can be programmed across the other 20 buttons.

If that sounds like a lot of flexibility to you, just wait until you see the software!

Finally, there is a three-position switch on the upper left of the Command Unit that allows the user to change between three different sets of commands (by default, Saitek suggests one for FPS games, one for RTS games, and the last for everything else). But that’s not all – each of these sets of commands is color-coded, and the switch changes the color of the back light accordingly. I apologize for the blur. 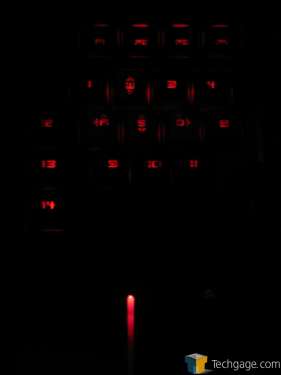 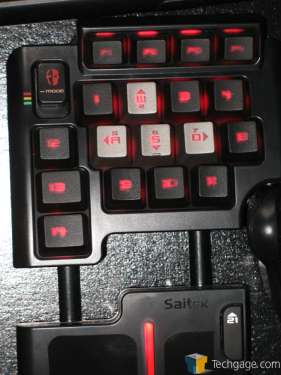 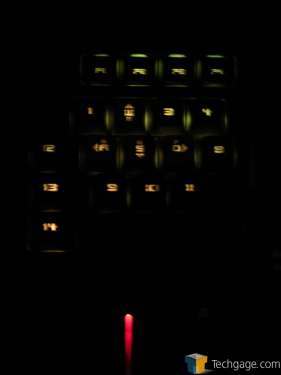 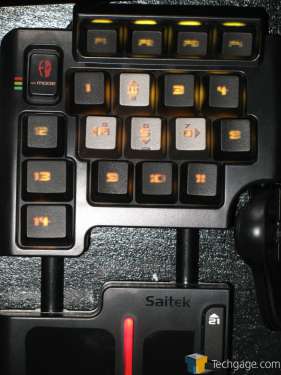 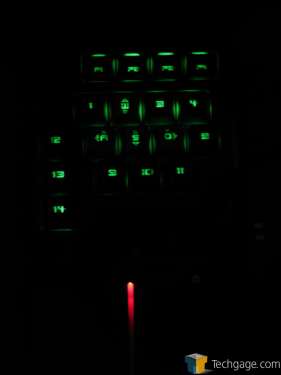 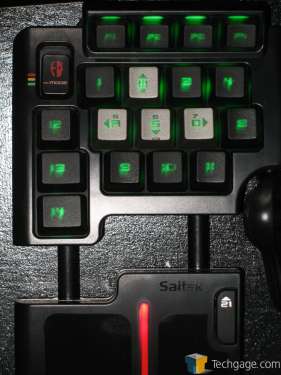 Definitely not bad, but I think Saitek would’ve done themselves a favor by using colors that matched their popular Eclipse keyboard, or at the very least include blue. It also would’ve been nice if the red line on the palm rest changed color. I guess you can’t have everything.

Now that it’s all unpacked and plugged in, let’s see if we can somehow figure out how to frag something with it!