by Greg King on September 8, 2006 in Peripherals

Craving one of the coolest looking gamer keyboards around? The Eclipse II delivers. It can be equipped with three different LED colors, and also packs a fair amount of functionality.

There have been a few big names in the PC peripheral game for quite a while now. When we think of I/O devices, mice, keyboards and game controllers come to mind more often than not. While keeping with the I/O theme, we just do happen to have the new Saitek Eclipse II keyboard lying around the Techgage office and I’m the one who gets to take it for a spin.

While Saitek was founded in 1979, they entered the gaming market in 1993. Since that time, they have grown into one of the better PC gaming peripheral manufacturers around. Working with gamers to better their products, they have produced products that have been praised by gamers and wanted by all. They struck gold with their Eclipse keyboard but are back to retake ground lost to its competitors with the Eclipse II. Having recently reviewed the G15 made by Logitech, how does the Eclipse II stack up against the G15 with its robust amount of extras? Let’s get into the review and find out.

In the past, I have spent far more time on packaging than I really have needed to. A box is a box is a box and that won’t ever change. No one reads hardware reviews to see how an item is packaged so with that in mind, I will keep this short and sweet.

The Eclipse II came to me in a typical shipping box, brown and bland. Once opened however, the retail packaging is shown. There is all the typical marketing information one could ever need and it really stands out. 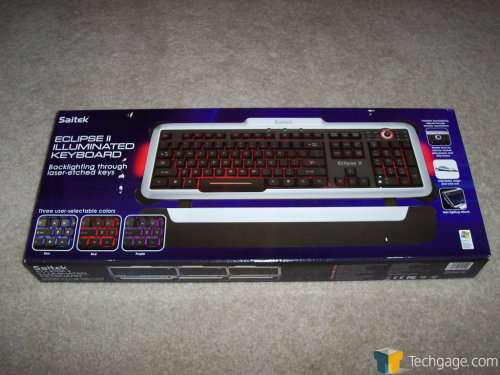 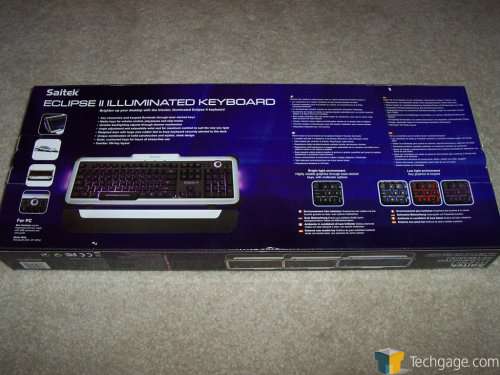 Once opened the Eclipse II comes packages in another box, separating the wrist rest to insure a safe ship. 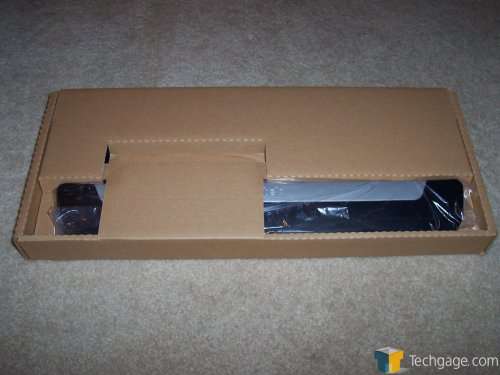 Once everything was out of the box and put together, not that there is anything difficult in putting the wrist rest on the keyboard, we can examine the Eclipse II itself. First, let’s start out with the information provided by the people at Saitek themselves.

There you have it. We are dealing with a standard 104 key layout and each of those keys can be illuminated with variable brightness. One more thing that I want to point out, and its not mentioned in the specs, is the different colors you have to choose from. You have the option to illuminate your keys with purple, red or blue lighting, This is ideal for those late night gaming benders that we all have gone on in the past and most certainly in the future. 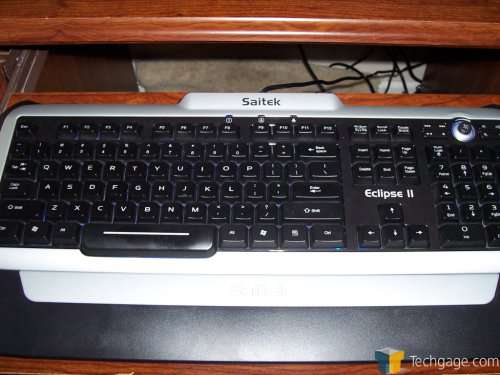 As you can see in the picture above, the layout of the Eclipse II is standard with the exception of the top right corner of the keyboard. This is where the media controls can be found. These include stop, play, forward, back, volume up, volume down and mute, but also has a knob that allows you to control the brightness of the backlit keys. There is also a button that allows you to cycle through the three different colors which are purple, red and blue. It should also be mentioned that you do not need to have to backlighting on at all. If you want to work with the keyboard unlit, you can do that but it’s nice to know that you have the option of three separate colors to choose from. It’s also nice to be able to adjust the brightness of the keys as well. Bright when you need it and dim when you want to be romantic. And nothing screams romance like a LAN party can. 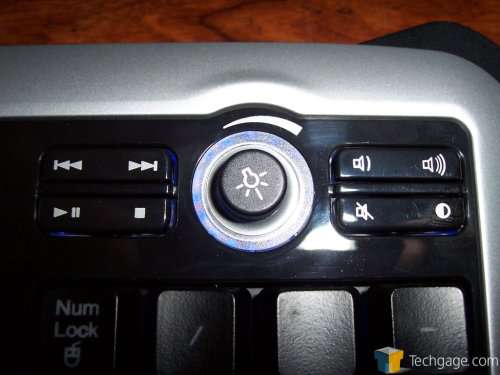 Another neat feature, if you want to even call it a feature, is the fact that the sides of the Eclipse II have lighting on them as well. These will always be the same color as the keys are, but add a nice glow around the keyboard when the lights are low. 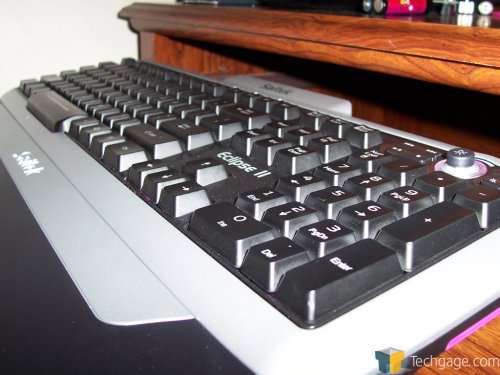 The side lights kind of remind me of underbody neon kits that a lot of sport cars have under them. When it comes to cars, it usually looks terrible unless it is done correctly and the same applies for keyboards and cases. Lighting is nice, when done tastefully. Fortunately for us all, Saitek nailed the lighting in my opinion.

Below you will see the different examples of the coloring that you can expect to enjoy when you use an Eclipse II yourself. 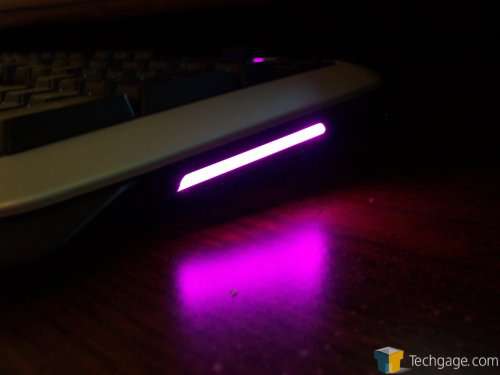 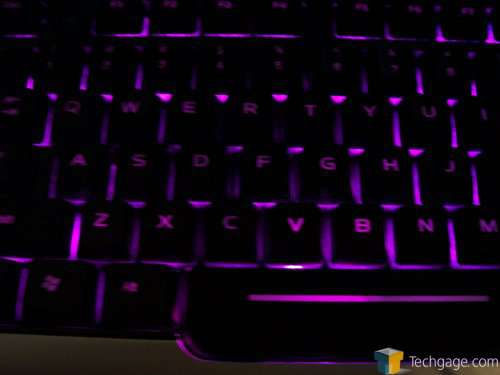 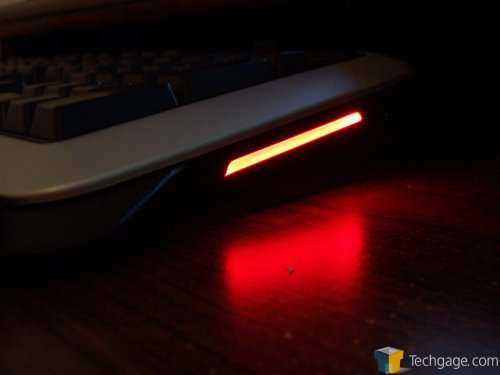 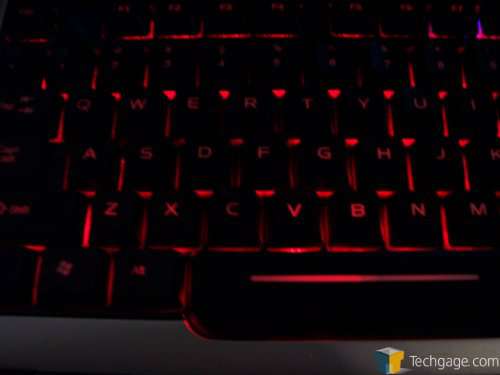 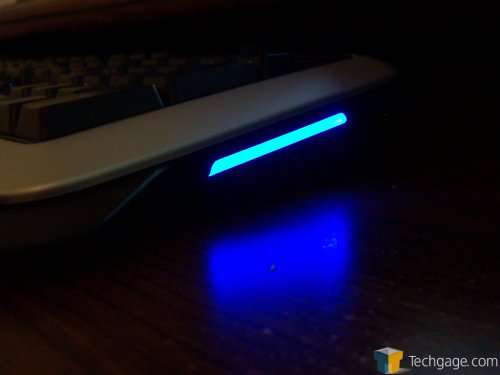 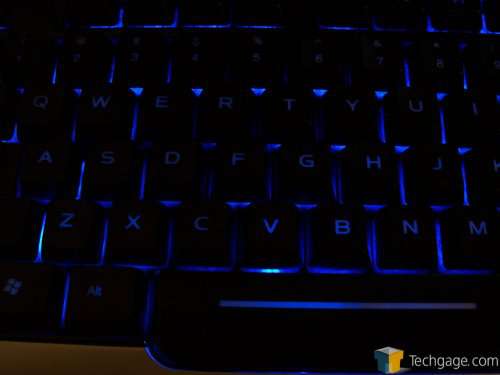 There you can see the colors are bright and the keys are relatively visible. One thing that I loved about the G15 was the fact that each key was lit up individually as opposed the Eclipse II where the lighting was underneath all the keys and the light comes through the laser etched keys. While this isn’t much, it’s something that all ‘premium’ keyboards should offer. Who knows, perhaps that can be addressed in the Eclipse III, should it ever be manufactured?