by Matt Serrano on February 5, 2008 in Graphics & Displays

Think large displays are over-rated? Then Samsung’s brand new 743B might just be worth a look. At 17-inches, it sure isn’t for everyone. It offers a 1280×1024 resolution, fast 5ms response time and an outstanding 7000:1 contrast ratio. Does this small monitor pack a big punch?

In recent years, displays have continued to grow larger and larger, while smaller monitors have begun to fade in obscurity. We often overlook the fact that there is a large market for small affordable LCD displays for people who may not want the best, but are still looking for something with a low price-point that will manage every day use.

It’s a safe bet to say anyone looking for a full-featured monitor will probably head toward another option. a 5:4 1280×1024 17″ monitor isn’t something most gamers or movie-buffs would be interested in, but people who do simple tasks who don’t mind a relatively meager offering would certainly come across it. So, it doesn’t fit everyone’s needs, but it is one of the many solutions available.

You won’t find much out of the box with this monitor. Essentially, you get the monitor itself, the stand, power cable, DVI and VGA cables, and manuals. The entire package is in a regular cardboard box, so right off the top nothing’s too flashy.

The stand was something I initially had trouble with. It took me two tries and a trip to the manual to understand how to mount the display. Instead of just snapping it on like one would expect, the display needs to be placed atop the stand, then be rotated while a small screw is tightened to secure it. It’s an awkward motion since you have to turn everything upside-down, but in the scheme of things it’s a problem easily over-looked. 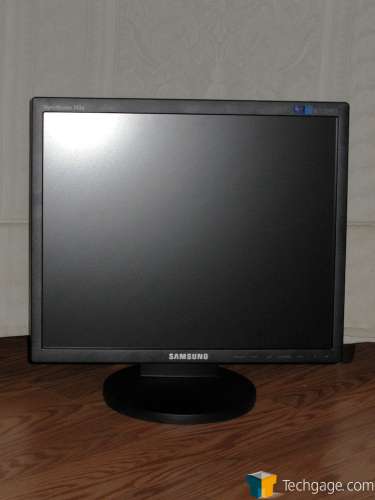 The stand is relatively high quality. It is able to twist and pivot the screen, and while its usefulness is debatable with a 4:3 monitor, it’s a nice feature to have. The lock on the back keeps the monitor at a certain height, but it can still move in other directions if it’s hit accidentally.

The DVI and VGA ports are located underneath on the left side of the display (looking at the front end of the monitor), and the power on the right. I do wish the stand had some form of cable management system, however, as the cables have to go around it.

The look overall is very basic, so the exclusion of something so simple detracts from its appearance even further. This may not be a problem if it is used with a third-party stand or mounting system, but it is still in-excusable and defeats the purpose of the stand’s functionality. 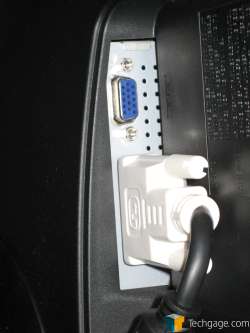 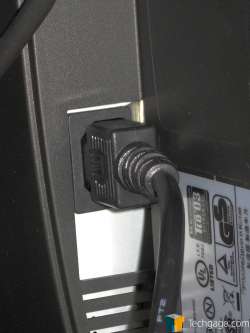 I have to mention that it’s nice to receive a DVI cable bundled with a budget monitor for a change. Even though there is a lack of other inputs, I can’t really say with much confidence that they will be missed by most buyers.