If you are looking for a lightweight MP3 player, Samsung’s K3 2GB or 4GB player is worth your consideration. It weighs just 200g, includes a bright OLED screen and proves simple to use.

A recent report stated that teens no longer find a new car to be the best way to portray their personality, but instead the shift has moved towards their cell phones and other electronic gadgets. Cell phones, MP3 players and other fun electronics used to be bulky and ugly, but no more. Compare a first-gen iPod to the latest-gen models and the difference is scary. In the natural progression of things, styling is constantly improved, as well.

I’ve been a fan of Samsung for quite some time now, because they implement a style into their products that I can’t seen to find elsewhere. Clean looks, smooth design and definitely eye-catching. I primarily find this with their line of point-and-shoot cameras, but their MP3 players are also reaping the stylish rewards.

Today we are taking a quick look at their YP-K3 player, a 2GB flash-based offering, which is also available in 4GB. I’m not normally one to oogle over a simple MP3 player, but the K3 seems to have done everything right in terms of styling. It’s glossy black all over with silver trim. Made even better, the player includes a 160×128 OLED 1.8″ screen with a blue color scheme.

As far as support goes, the player can use MP3, WMA, ASF and also WMA DRM music formats. It can also support JPEG files, for picture-viewing. The 2GB model promises upwards of 25 hours of playtime, while the 4GB version cuts that down to 20 hours.

The K3 comes in a modest box, with an inner box that slides out. The inside black box says, “For you” in stylized writing, which is quite disturbing to say the least. But hey, if it’s a gift, you have one less thing to do.

Included inside are ear buds, a USB cable, Windows driver and also the manual. More than likely, the manual will never need to be touched, at usage of the player is rather straight-forward. 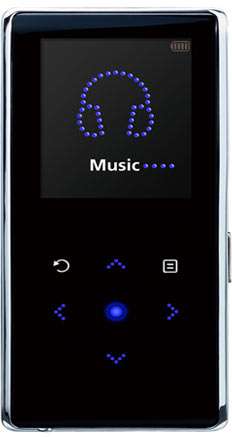 The player uses an MTP connection to interact with your PC, so for Windows, you will need to make sure you have at least Windows Media Player 10, or use some other software that includes support for it. Linux users are not so lucky, since MTP is hit or miss under the OS.

When plugged into Windows though, you will find a new drive under My Computer, that goes by the players name. There you will see a few different folders, and you can simply drag and drop your music into the Music folder, or use your favorite media player to do it.

Overall the player is quite simple to use. With it gripped in your hand, you can use your thumb to control everything. You shouldn’t really need to shift your hand at all to reach a certain option.

After holding the power button down for a second to turn on, the screen glows a bright blue. Regardless of where you were in the player when you turned it off, it will be right back there when powered back on. So if you half-listen to a song and turn the player off, you can turn it back on and continue from where you left off. In addition, if for whatever reason your headphone jack hauls out of the player while in use, the song will automatically pause. After a minute of inactivity, the player will turn itself fully off.

Below the screen, there is a simple directional pad, in addition to a back button and also a menu button. At main screen, you will have Music > FM Radio > Photo > Settings. When switching from one to another, the blue dots merge to form the new shape. It’s fun eye candy.

Once in the music menu, you can choose to view your music by Artist, Albums, Tracks, Genres or load a playlist, of which you create on your PC. Navigating in between the menus could not be made any easier. I didn’t have a single issue with accidentally hitting the wrong key, or hitting a key and not having it react.

The “Enter” button is the blue dot in between the directional pad. While music is playing, you can hit it to pause the music, and hit it again to continue playing. While playing music, you can push the menu button to load up a few options, including Sound Effect (Normal, Vocal, Bass Boost, 3D Sound, Concert Hall), an option to disable the EQ and lastly another option to change the play mode (repeat, shuffle, etc).

Sound quality is impressive, and I don’t have any complaints. Even the include ear buds offer rich, loud sound, without any distortion at higher volumes. Since I primarily used the player at home, I stuck with using my SteelSound 4H headphones which offered bassier music, naturally. 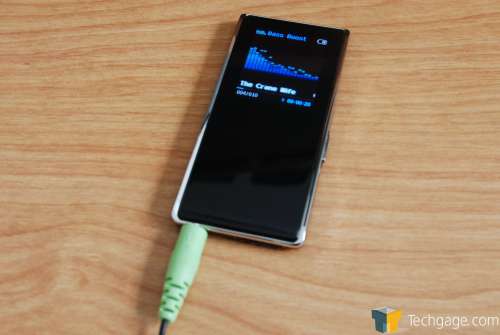 The FM Radio worked far better than I expected as well. When compared to my clock radio, it’s really night and day. The player picked up on all of the popular local radio stations, without any audible static whatsoever.

Overall, I am quite impressed with the K3, more so than I expected to be, actually. It works quite well, is easy to navigate, sounds great and has a fantastic color scheme. My primary complaint is that the ear buds are a wee bit on the large side, so with jogging, I could see them falling out of most ears.

Compared to other 2GB players on the market, the K3 is priced competitively at ~$120. By comparison, Sandisk’s Sansa 2GB player retails for an average of $100, while Apple’s iPod Nano hovers around ~$140. The K3 has a few benefits though. It’s smaller and lighter than the others, and features a bright OLED screen. It also turns out to be quite simple to use, which is a huge plus. In the end, I am awarding the YP-K3 an eight out of ten.