The smartphone might have taken over the bulk of our digital lives, but there’s still room for the dedicated audio player, be it for working out or just wanting a convenient option. SanDisk has long offered some of the better, easier-to-use players with its Sansa series, so let’s see how its latest models fare: the Fuze+ and Clip Zip.

Once upon a time, the dedicated MP3 player market was booming. A countless number of companies had developed their own vision of what such a device should look like and offer, and evolution eventually brought us to a time where video support even made an entrance.

Then the smartphone happened. Be it the iPhone, BlackBerry or some Android device, our phones today make it easy to listen to music whenever we feel like it, leaving some to wonder about the future, or even the present, of the dedicated audio player.

The fact that just two main companies produce such things doesn’t help matters. Those companies are of course Apple and SanDisk, and while both offer products that aim to do pretty-well the same thing, neither of them take the same approach to how things should be done.

SanDisk released its latest Sansa player a month or so ago called the “Clip Zip”, a super-small player that can clip to your clothing for convenience – a major plus for workouts. The Fuze+ was released last fall, but for the sake of seeing all of what it is that SanDisk currently offers, we’re taking a look at both in this review. 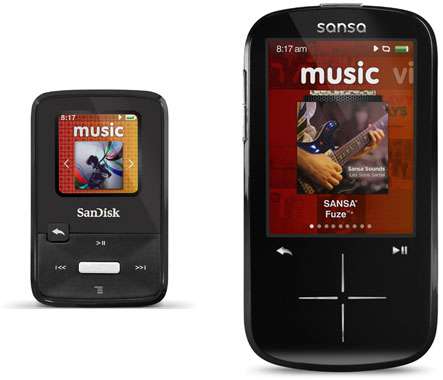 First up, a look at the most recent model, the Clip Zip. This is a player that takes the iPod shuffle head-on, but in terms of size, the Clip Zip is just a bit larger. With that trade-off comes a 1.1″ screen and microSD slot. Out of the gate, the Clip Zip is offered in a 4GB or 8GB size, but can be expanded up to 36GB or 40GB with a 32GB microSD card. 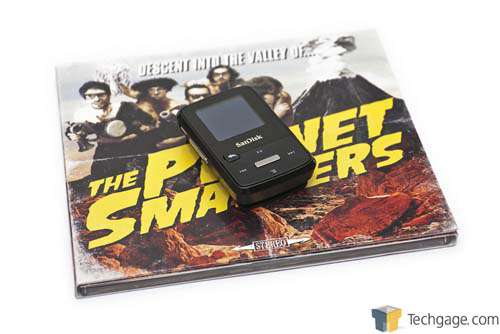 Aside from an obvious size difference, one of the most notable changes between the Fuze+ and the Clip Zip is that the latter has real buttons rather than a touch-sensitive surface – an important change as we’ll discuss later. There are six buttons in total, four of which belong to the subtle directional pad. The rectangle button in the bottom middle is used as an “OK”, while a protruded “Back” button can be seen just above the d-pad.

The screen is a mere 1.1″ in size and is more than sufficient for the tasks it’ll need to handle. It’s low-resolution as one would expect and not as crisp as the screen found on the Fuze+ (which is comparable to some smartphones), but it gets the job done.

On the left side of the device is the volume rocker and USB port connector, while the audio jack and microSD slot can be had on the right.

Included in the package are various offers from TuneUp and emusic, along with the micro-USB cable and earbuds. Pre-loaded on the player itself is a sampling of music from Casiokids, Dan Zanes and Friends, RJD2, The Raveonettes and TiÃ«sto. 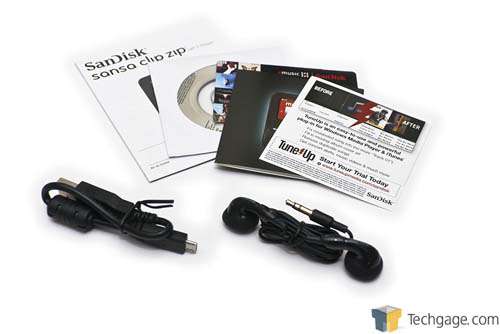 Capabilities-wise, the Fuze+ and Clip Zip aren’t that much different, but the Fuze+ features a much larger and much clearer 2.4″ QVGA (320×240) screen. Pre-loaded on the device is the music mentioned above, but also a quick video showing off a TiÃ«sto concert, and overall that alone sold me on the quality. I personally couldn’t imagine watching anything on a small screen (sometimes even a Nintendo DS drive me bonkers), but if in a bind, it’s an option. 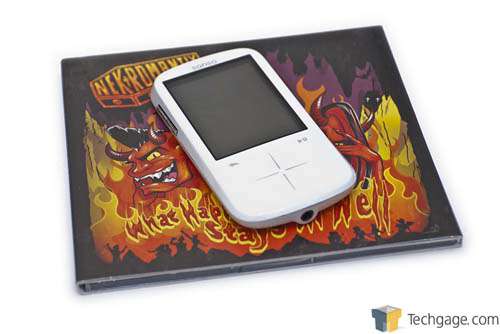 In lieu of physical buttons, the Fuze+’s lower surface is touch-sensitive. If done well, touch-sensitive buttons can be a good thing, but in this case, it isn’t. If you’re a person blessed with extreme patience, you may not mind it, but for anyone else who just wants to rush through a menu to get to whatever it is they need to, expect a finicky experience.

There are a total of seven “buttons” here, with the directional pad claiming four, the center of the d-pad being the “OK”, a “Back” to the top-left of the d-pad and then a “Play/Pause” to the top-right.

On the left side of the Fuze+ is the volume rocker and microSD slot, while the right side has the micro-USB port. Unlike the Clip Zip which has the audio port on the side, the Fuze+ has it on the bottom – a bit strange but not a problem per se. 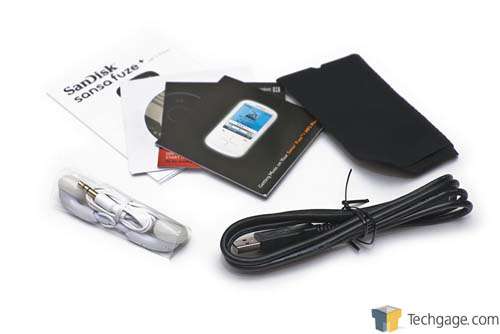 The included Fuze+ accessories almost match those that came with the Clip Zip, although a small felt carrying pouch has been included here thanks to the scratch-sensitive screen (I found this out the hard way).

That takes care of our look at each player. On the following and final page, I’ll go over the software aspect of the players and wrap up with my thoughts on testing each one.