Gaming on a budget isn’t as difficult as it once was, thanks to superb offerings from both ATI and NVIDIA that go for a modest price. But, what about the sub-$100 crowd? We’ll find that out here, at least from the ATI side of things, with Sapphire’s HD 4670 GDDR4 and HD 4830. Both feature great efficiency, and believe it or not, great overclocking as well.

It’s been quite a while since we last took a look at a “budget” graphics card, so to help make up for lost time, we’re going to be taking a look at two here today. Both come courtesy of Sapphire, so they’re both ATI-based cards: the Radeon HD 4670 and also the Radeon HD 4830. Both include 512MB of on-board memory, although the HD 4670’s largest selling feature is the inclusion of GDDR4, rather than GDDR3 of most other cards out there, including the HD 4830.

I should clarify what “budget” means to me, and most other people, because lately, it’s been quite difficult to discern the true meaning. That’s actually a good thing, because the value in graphics cards today (and CPUs for that matter) is incredibly good. For $150, you can get a truly amazing graphics card, despite the fact that many call it inexpensive. Budget in this case denotes cards that cost at or under $100, and in the case of both of the cards here, they fall well below that, especially if mail-in-rebates are taken into consideration.

In the past, I’d be quick to discredit a “budget” graphics card for the simple fact that they’ve usually been quite under-whelming. Compared to cards even 50% higher in cost (which here would equate to $40 – $50), the performance just wasn’t there, and I’d actually feel bad for anyone who found themselves having to suffer with what they had. As just mentioned though though, today’s lower-end and mid-range cards offer tons of performance for a modest price, so I had much higher hopes with these cards here today than anything else in the sub $100 category that I’ve taken a look at in the past. 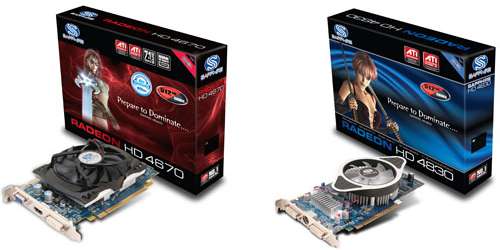 It’s still important to note, however, that as with any sub $100 graphics card, you’re not going to get anywhere near the performance as the next step-up on the ladder. Today we’ll be able to see some proof of that, as the HD 4830 does indeed follow the HD 4670 on ATI’s hierarchy. On the other hand, such cards are generally quite ideal for those wishing to run either a low-power machine, or an HTPC. Both of today’s cards are of a small form-factor, and they both have complimentary power consumption and temperatures as well.

If you’re asking yourself, “Why did he include the type of RAM in the title for the HD 4670 but not the HD 4830?”, then I’ll tell you. Normally I don’t even list the amount of on-board memory in the title, but in this particular case, the GDDR4 is supposed to be one of the card’s main selling points, and Sapphire themselves have included it officially in the title. Is it really that big of a deal? Not in the grand scheme, but nobody is going to push away faster memory as long as temperatures and power consumption are kept in check, so there’s little to complain about.

I have to mention, I actually find Sapphire’s “Ultimate” edition card to be of much more interest, as it features near-identical clock speeds (memory is 27MHz slower), but a completely passive cooler in lieu of a fan. Now, after testing this GDDR4 version, I can attest to the fact that the fan is quite silent, but completely silent definitely gets my nod where a card like this is concerned.

But I digress. As mentioned above, the HD 4670 from ATI is designed for those value-conscious consumers who don’t want to spend a lot of money, but don’t want to sacrifice all of their gaming ability either, as they’d expect from a ~$50 offering. While it won’t offer anywhere near the performance of say, the Radeon HD 4850, it will most certainly have enough “oomph” for gamers using resolutions of 1680×1050 or less, and who don’t have the desire for anti-aliasing (and at this price-point, you really shouldn’t expect that in games outside of Solitaire).

Of course, that’s not the only GPU we’ll be taking a look at here, as we also have the Radeon HD 4830, a card that’s designed to out-perform the HD 4670 for an extra ~$20, but fall right below the stellar Radeon HD 4850. Most HD 4830’s I’ve seen on e-tailers like Newegg currently retail for very close to $100, and most fall well below after a mail-in-rebate. Overall, both cards look attractive for the gamer on the budget, and as we’ll see throughout the article, the performance isn’t half-bad either.

As you can see in the table above, ATI currently has nine different desktop Radeon cards on the market, from the ultra-low-end HD 4350, all the way up to the high-end dual-GPU HD 4870 X2. Although their roadmap is still up in the air, based on leaks we should be seeing an HD 4890 in the coming months. That card is targeting a completely different audience than this article though, so we won’t talk about it here.

With so much competition in the graphics card market nowadays, companies have to work hard to differentiate themselves from the competition. After all, the root of the product sits either with ATI or NVIDIA, so people have to have a good reason to choose one brand over another. In the case of Sapphire, they’re making sure that their cards look unlike anything else out there. We first saw proof of this a few months ago when we took a look at their Radeon HD 4850 X2, which featured a very unique, yet efficient cooler.

Starting off with the HD 4670, we can see a leaf-blower fan takes up almost the entire card, which isn’t too difficult given that the card is actually quite small. Thanks to this large fan though, the card operates at near-silent noise levels at idle (no 3D graphics), and is in no way audible even at full load, unless you open up your chassis and put your ear near it. 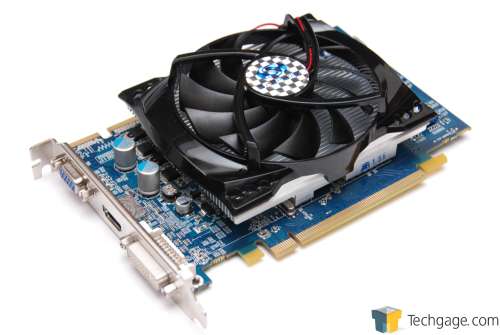 What differentiates a budget card from a low-end or mid-range? The absolute lack of a power connector, of course. Powered only by the PCI-Express bus, this card can be installed into any SFF PC without the worry of power requirements (TDP is a modest 70W), and despite it’s low-end status, it even supports CrossFireX. Also notice the addition of an HDMI port. If this isn’t built for an HTPC, I’m not sure what is. 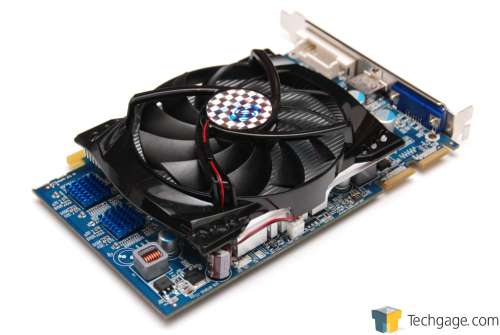 The cooler on the HD 4830 card is efficient, but I don’t really care much for its aesthetic properties. You may disagree, however, as it’s all really a matter of opinion. What does matter, though, is that it does a good job of cooling your card, and this one does. 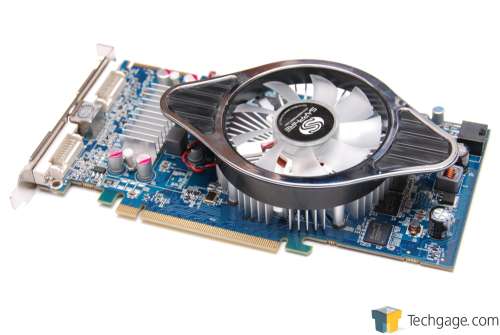 In way of accessories, neither card includes a game, but does include hopefully everything you’ll need to get up and running. The HD 4670 packs a manual, driver CD and an OEM copy of both CyberLink’s DVD Suite and also PowerDVD, along with a CrossFireX bridge connector. The HD 4830 lacks the software, but also includes a driver CD and manual, along with VGA>DVI and HDMI>DVI adapters, and also an S-Video cable and 4-Pin Molex to 6-Pin PCI-E power converter cable.

For the most part, the cards themselves look great, especially the HD 4670, and the accessories are pretty representative of what you’d expect to see with a sub $100 offering. The included software with the HD 4670 is a nice added touch, though, especially if you decide to use it. Now with a look at the cards out of the way, let’s first review our testing methodology and system, and then move right into our look at Call of Duty: World at War performance.