A couple of years ago, hooking yourself up with a multi-monitor setup might have seemed a little unrealistic, but things have certainly changed. Back in September, AMD told us about some killer bundles that included three displays, a GPU and special active cable, all for around $500. Think about that for a second… three displays… $500. Times in tech are certainly good.

Of course, those displays are only 20″, but to go higher, prices are still easy to stomach. This assumes that are not insistent on having the best of the best. It’s when you hit 30″ displays that a 3×1 setup sounds crazy, because unless you get such displays used, three from any vendor would likely set you back around $4,000 or more.

Needless to say, while 3×1 setups were uncommon in the past, I see them growing in popularity – especially over the next year or two. The biggest concern nowadays isn’t so much the cost, but the space required. Because of this, AMD and its partners have been pushing Eyefinity technology for some time. Most recently, Sapphire released a Radeon HD 5770 “FleX” edition, aiming to make it easier for gamers to take the Eyefinity route.

If you’re still not sold on the Eyefinity concept, or multi-monitor gaming in general, I recommend you check out an article we published a couple of months ago called, “The Benefits of Multi-Display Gaming“. If you take gaming seriously, you might want to reconsider your single-display setup!

AMD’s Radeon HD 5770 has been out for a while, but while waiting for the next series of GPUs to come along (HD 6000), vendors such as Sapphire have continually pushed out refined options, and in the case of FleX, it’s a card that focuses on allowing gamers to adopt Eyefinity by enabling them to use three DVI monitors, rather than two and also a DisplayPort. The company allows this by including a DisplayPort-to-DVI cable in the box.

Before we go further, you can review AMD’s current Radeon lineup:

It’s important to note that AMD will be rolling out its first Radeon HD 6000 series of GPUs soon, but the HD 5770 is likely to be safe for a little while due to pricing. And thanks to the performance it already offers, powering 3×1 displays is no problem at all. Because it’s a mainstream GPU offering, the most common multi-display resolution it will power is 4800×900 (3 x 1600×900), which is a typical 3 x 20″ configuration.

The FleX card includes a rather interesting cooler that’s more box-shaped than anything, and compared to the reference design, it should allow for better airflow and temperatures. Similar to many other third-party coolers, this one features a copper base and heatpipes that flow through a finned design. The overall design is common, but Sapphire’s card includes a slightly different fan, where each blade is more curved than usual. 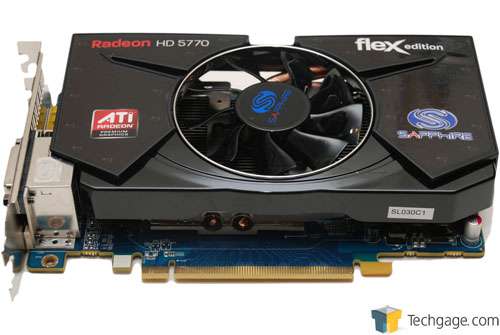 Like all other HD 5770’s, this one requires a single PCI-E 6-pin connection. 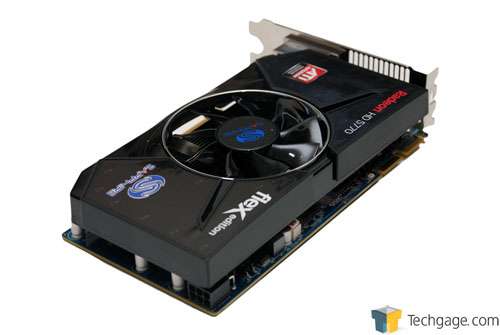 Despite being geared for Eyefinity, Sappire’s “FleX” doesn’t change up the connectors on the back at all. We still have 2 x DVI, 1 x HDMI and 1 x DisplayPort. For 3×1 display use, you’d use two of the DVI’s and also the DisplayPort. If your monitor doesn’t have DisplaysPort, you can use the included DisplayPort to DVI cable. 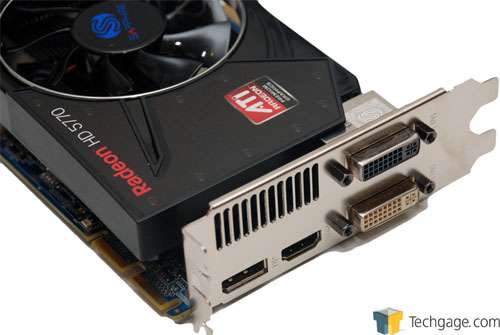 Overall, there’s not much to say about this card, since it isn’t far different from the other HD 5770’s that have been available for a while. We’ll be benchmarking this card just like all others, with our three most popular resolutions, and also include a single benchmark in 3×1 mode for each game we test, except for StarCraft II as that game disallows multi-monitor support. But first, our test system and methodology.