When I had the chance to take a good look at Eyefinity using both 3 and 6 monitor configurations this past spring, I became a believer fast. With the HD 5000 series launch, I jumped to conclusions that multi-monitor gaming wouldn’t take off, but once I actually had a chance to give it a good test for myself, across numerous titles (20+), I found it a little hard to get used to one screen again. Companies such as Sapphire, with its FleX card designed for Eyefinity, confirms its own belief that multi-monitor gaming has some real value.

Where Sapphire’s FleX card in particular is concerned, it doesn’t do much physically different compared to other HD 5770’s, but it does include a DisplayPort to DVI cable, which enables anyone with three monitors (that have DVI) to get started with Eyefinity. Because DisplayPort is a required component for Eyefinity, this is the only solution for those without a DisplayPort monitor. Fortunately, we can be thankful that this workaround exists at all.

With Northern Islands’ launch right around the corner (October 22), the question has to be raised as to whether or not it’s wise to invest in an HD 5770 at this point in time. Unfortunately, I had this card in my possession for months, and due to various delays and other things, it took me this long to tackle. The card would have been far more relevant back when I first received it, but even as it stands, it looks as though the HD 5770 is going to have redeeming value for some time to come. 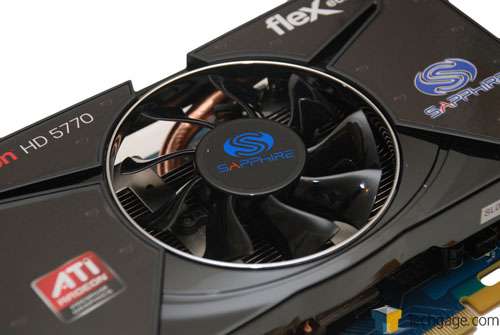 As mentioned in our intro, AMD pointed out a couple of deals at Newegg weeks ago that were in all cases impressive. Although i wouldn’t consider 3 x 20″ to be an ideal setup (at that point the screens are kind of small, so the level of immersion isn’t quite as high as say, a 3 x 24″ setup… but that’s a personal opinion. Even so, the fact that three 20″ monitors of decent quality, and an HD 5770, and an active cable can be had for $500… that’s impressive.

Based on rumors alone, the launch Northern Islands cards, the HD 6850 and HD 6870, aren’t going to replace the HD 5770’s price point, so at $150, a card that can power a 4800×900 resolution at decent detail levels (in some cases, great detail levels) is hard to ignore. For the gamer looking to dive into Eyefinity but wants to do so as cheaply as possible, the HD 5770 is going to be a winner for a while.

If the Northern Islands launch has you at all spooked, however, you can wait until the end of the week and all questions will be answered. Unfortunately, that’s all I can say for now. Be sure to check back later this week for our HD 6800 launch coverage!