Hmm, am I addicted to the Radeon HD 5770? Just last week, I posted an in-depth look at its CrossFireX performance (which was awesome), and today, I’m looking at one of the first models that features a non-reference design. When Sapphire told me that this card was en route, I was looking forward to receiving it, because though I’ve only taken a look at a couple of its Vapor-X models in the past, all have impressed me.

What makes Vapor-X cards special, sometimes more so than the competition, is that the cards aren’t shipped out with ultra-high clock speeds, because that’s not the point. Some vendors will overclock the heck out of a card, and charge a sweet premium, but Sapphire is taking a slightly different route by making obvious improvements to the design, but charging only a modest premium. What do these improvements include?

For one, a non-reference cooler, which is for the most part rather self-explanatory. I will admit, though, that while reference coolers used to be something to spit at, things have vastly improved since then, as both the power efficiency and lower overall output temperatures of the cards have improved. Less power means an easier card to cool, and we’ve seen that reflected especially with ATI’s HD 5000 series of cards.

But just because cards have gotten better in that area, it doesn’t mean further improvements couldn’t be made, and Sapphire accomplishes all that and more with its Vapor-X designs. The cards tend to run cooler, and quieter… two things that go great together. That’s not it, though, as Sapphire also implements higher-quality chokes that are said to improve power efficiency, and from the results we’ll see later, I tend to believe the hype. 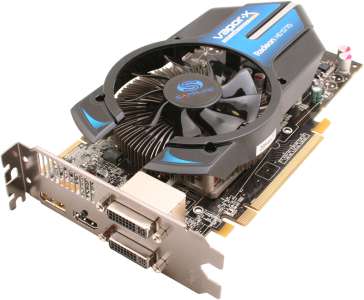 Last, but not least, Sapphire’s Vapor-X takes all of its improvements and delivers better overclocking-ability over reference cards, and that’s yet one more aspect that proves true in our tests. After all, if higher-quality chokes are used, and an improved cooler, it would make sense that the card would also see better overclocking, and given that ATI’s latest batch of cards have proven to be very overclocker-friendly, you’re usually able to far surpass stock speeds with relative ease.

The biggest goal of a Vapor-X card is to deliver top-rate cooling ability, and to pull that off, Sapphire designs its coolers in such a way that heat will be efficiently expelled from both ends of the card, not just the back. In the case of this particular card, a modest shroud is installed, with the back-end being designed to push the air out through a tunnel in an efficient manner. The other end, closer to the PCI bracket, is a bit strange since it looks to simply let the air go wherever it pleases, but as this isn’t a high-end card, that may not matter.

Before we dive into a look at this particular card, here’s a quick roundup of AMD’s current GPU line-up, with a total of five cards belonging to its HD 5000 series so far.

As I mentioned above, Sapphire doesn’t apply major overclocks on its Vapor-X cards before shipping them out, but up to now, all of them have had some sort of a boost. The HD 5770 model isn’t excluded from that, but what’s unique is that it might be the smallest pre-overclock I’ve ever seen. The model’s reference clocks are 850MHz Core and 1200MHz Memory, and the Vapor-X bumps only the Core clock, to 860MHz. Yes, a mere 10MHz boost to the Core. That’s about all I can say to that.

Because of the robust air cooler, though, we could likely expect to see some hearty gains in our overclocking compared to the reference HD 5770. As you can see below, the Vapor-X cooler looks nothing at all like the reference, with open sides open on each end, and plenty of room for air to escape. The block that connects to the GPU core is rather modest as well, but it would be hard to expect a more robust cooling solution on a mid-range card. Mid-range is called mid-range for a reason, after all. 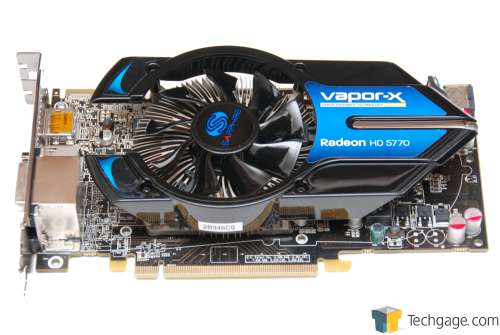 Like the majority of ATI’s HD 5000 series cards, this one includes two dual-link DVI-D ports, along with HDMI and also DisplayPort. For those stuck with VGA, an adapter is included, as expected. On the opposite end of the card, not shown, is a single PCI-E power port, as that’s all that’s required. This is a great thing, since adding a second card wouldn’t prove difficult to those who use power supplies with just two PCI-E power cables in total. 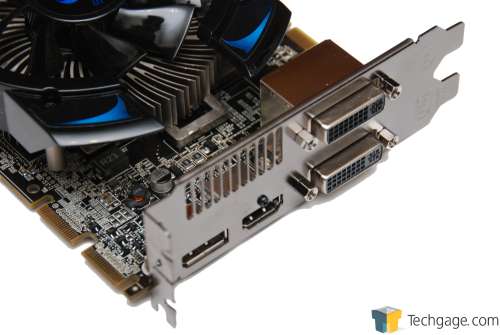 Another common theme for most of the HD 5000 series cards on the market right now is the inclusion of a voucher for a free copy of Dirt 2, and this card isn’t exempt. If that’s a game you’re planning to pick up anyway, that makes any current HD 5000 card an even better value, since the game itself retails for $40.

By this point in time, I’m sure that most of us are well aware of what the Radeon HD 5770 brings to the table, such as DirectX 11, Eyefinity, along with improved performance and power consumption. With this Vapor-X card, Sapphire aims to improve on almost all of those aspects, which means a card that could be even more power efficient, runs even cooler, and perhaps performs a bit better as a result. Let’s see how many of these hold true throughout all of our tests.