Though Sapphire’s Vapor-X card is technically pre-overclocked, it has the weakest one I’ve ever seen. As the reference HD 5770 has fairly good overclocking-abilities, I was hoping that coupled with the improved chokes and far superior cooler, that our overclocking headroom would increase, and it did. While the stock clocks are 850MHz/1200MHz, the top overclock here was 960MHz/1400MHz. That’s a major improvement over the reference card’s overclock of 910MHz/1225MHz.

As odd as it is, though, the performance we saw after the overclock wasn’t actually that great compared to what we’d expect. Let’s face it… 110MHz to the core and 200MHz to the memory is a huge boost, and while we continued to see improved performance the higher we went, the benefits were slow to grow. One reason for this may be the limited memory bus, at 128-bit (compared to 256-bit of the larger cards), because common sense would tell me that we should be seeing far larger gains than this: 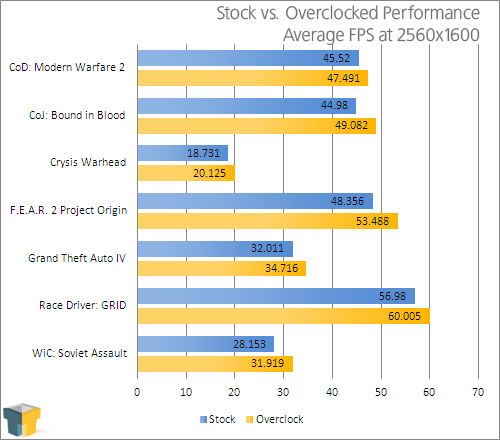 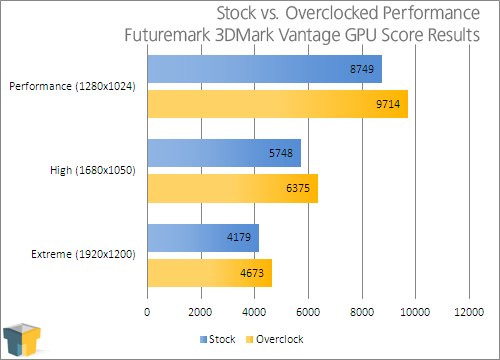 Still, for completely stable performance, the results are fantastic, especially as the card managed to retain reasonable temperatures throughout all testing (~75°C). At that temperature, that’s actually better than what the reference card can manage at stock speeds, so if that’s not an impressive accomplishment by this card, I’m not sure what is.