The more I use an HD 5770, the more I like it, and one of the latest reasons is the Vapor-X. Compared to a reference card, the Vapor-X carries a ~$15 premium, and from what we saw here, I’d have to say that it’s well worth it. I should make it clear that I’m someone who appreciates improvements on power consumption and cooling, though, so if you don’t weigh those as heavily as I do, then picking up a reference card is going to be fine.

From the cooling standpoint, the Vapor-X is hands-down a winner. It dropped 14°C off of the load temperature (compared to reference), and 9°C at idle. This was all while retaining decent noise levels (it sure didn’t stand out). It’s a major improvement over the reference cooler, especially when its overclocked temperatures still came well under what the reference card could pull off with stock clocks.

Then there’s the power consumption improvements. I didn’t expect the higher-grade chokes to improve much, but I was wrong, because the differences were clear after testing. At load, the reference card hit 245W, while the Vapor-X topped out at 234W… an 11W drop. There was also a 6W drop at idle, which was also nice to see. Any drop at all is interesting since the card does have that 10MHz boost. 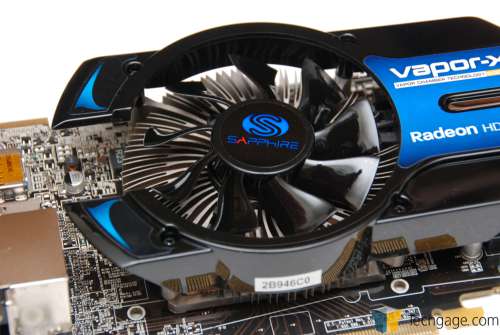 In addition to those perks mentioned above, the card managed to hit a much higher overclock than our reference card, which was to be expected. What wasn’t to be expected was the lack of real performance gains with such an impressive overclock. The tighter memory bus seems to be rearing its ugly head here. Still, the fact that we could overclock the card so high, and not have to worry about temperatures at all was nice.

Like most current HD 5000 cards on the market, this Vapor-X includes a voucher for Dirt 2, making the card an even greater value if you were looking to purchase that game anyway. To add to it, the HD 5000 series arguably still has the best graphics cards on the market thanks to its inclusion of DirectX 11 and Eyefinity (if you yearn for multi-monitor gaming). Add the much-improved power consumptions and temperatures, and AMD is really, really hard to beat right now, and this Vapor-X just improves things even further.