Before we kick off this review, I’d like to give everyone a moment to regain their composure either from having a hearty laugh or being greatly confused. Yes, this is a review of an HD 5850 graphics card in, *checks calendar*, 2011.

When our friends at Sapphire a couple of weeks ago contacted us about reviewing the “Xtreme” edition of its Radeon HD 5850, I was a little taken back. “Are they serious?”, I thought. It was the first time ever that I can recall where I saw a company release a last-gen product well into the current-gen cycle. So what’s the deal?

According to Sapphire, the HD 5850 was one of the most heralded graphics cards released over the past couple of years, and in some ways, it out-performs the newer HD 6850. One example is with the computational power (2.088 TFLOPS vs. 1.488 TFLOPS) and texture fill rates (52.2GT/s vs. 37.2GT/s) – but even so, can releasing a last-gen card more than six months into the new cycle ever make sense? 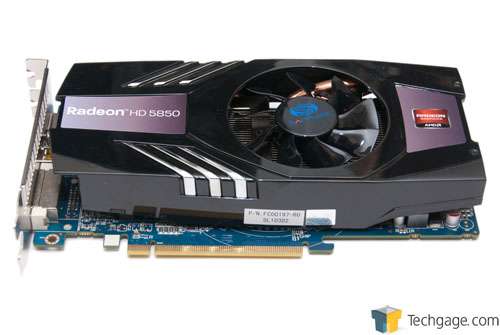 I thought Sapphire was a bit nuts when we were first asked to review a last-gen, yet current, graphics card, but I wanted to give the company the benefit of the doubt and see just what it was that made the “Xtreme” more extremey than the original, so I decided to get one in and take it for a spin.

Before explaining some of the improvements, let’s take a quick look at the current Radeon line-up, with the HD 5850 fused in:

I mentioned a moment ago that the HD 5850 has more computational horsepower than the HD 6850, and the reason is easily seen above; the older card has 50% more cores to work with. While I do believe the HD 6850 to be the more capable card in terms of overall features and architecture, the HD 5850 is just a smidgen faster – even in gaming.

There are a couple of things that set the Xtreme apart from previous HD 5850s. First, Sapphire has implemented a brand-new VRM design, to improve power efficiency. Second, the card features a new cooler – optimized for efficient heat dissipation and of course, improved overclocking. Third, Sapphire promises some great pricing.

Oh, and there’s just one more thing… something Sapphire didn’t even tell us about prior to sending us the card. The Xtreme is nearly two inches shorter than older HD 5850s: 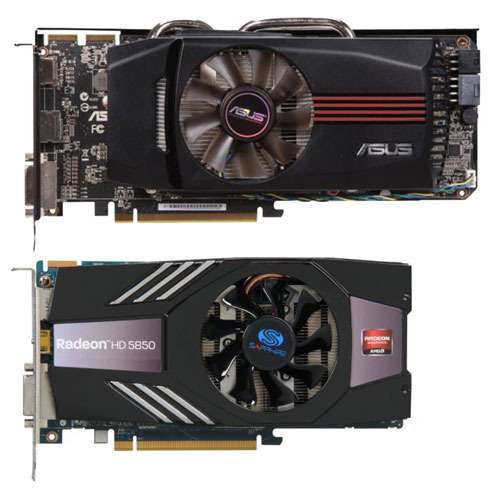 For the life of me, I couldn’t locate one of our older HD 5850 samples anywhere – even after a solid hour of looking – so I am unfortunately unable to compare the cards with their shrouds and coolers off. Judging by the picture above, however, Sapphire’s card is a major improvement.

To improve the cooling-ability of the Xtreme card, Sapphire dropped one of the DVI ports so that air could better stream out the back, and as you can see in the image below, there’s little to impede good airflow. 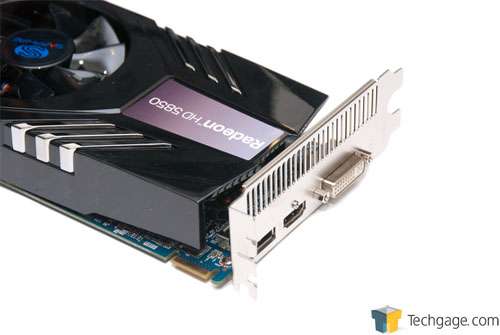 At this point, I’d love to say, “Need two DVI ports? No problem!”, but there is in fact a problem. For what I assume was to keep prices down, there’s only a single connector in the box, and that’s to convert the DVI into VGA. So, if you need to hook up a second display, hopefully one of them will be DisplayPort or HDMI, else you will need to pick up an adapter. For Eyefinity hopefuls, the same rules apply – you’ll be fine if you have three monitors that can natively make use of these three ports.

Before we can see if the Xtreme HD 5850 makes any sense today, we’ll need to pit the card against our usual fleet of games, so let’s quickly take care of our testing methodologies, and then we’ll kick things off with Dirt 2. Please bear in mind, however, that because we tested the original HD 5850 long ago, some gains will be seen over it, with the Xtreme. This is thanks to driver improvements made since we benchmarked the original card (we did our last revamp this past fall). With that said, let’s get a move on!