With the launch of AMD’s Radeon HD 5000 series, all we saw for months and months were 1GB models, and the reason is hard to figure out. GDDR5 pricing might not help, but given today’s games and high resolutions, wouldn’t there be some demand for a 2GB model? Well over the past couple of months, I’ve noticed that such cards are on the rise, and I knew I had to get one in and see if there was a good reason for their existence.

The card we received came in the form of the Vapor-X, from Sapphire. When I received it, I was a bit taken back, because the card as a whole is almost a spitting image of the original Radeon HD 5870 Vapor-X we took a look at this past fall. That’s not a bad thing, though, as the cooler impressed me a lot, as did the performance of the card itself.

Past that, having the exact same model and cooler of a card with more memory is nice, because you can compare the performance from a true Apples to Apples standpoint, and that’s what we’ll be doing here today.

If you’re asking yourself why 2GB on a GPU would ever be needed, in the simplest terms it’s because games are becoming beefier and beefier, and while 512MB was fine for a GPU a couple of years ago, today’s bare minimum is 1GB. 2GB is admittedly not going to deliver night and day performance (as we’ll see), but if you’re not looking to upgrade your GPU for a while, investing in a 2GB card today may not be such a bad idea (as long as it offers reasonable performance to begin with, of course.)

As mentioned in our original HD 5870 Vapor-X article, Sapphire has been pushing its special coolers quite hard the past couple of years, and in our opinion, it’s for good reason. Almost every single Vapor-X cooler we’ve looked at to date has offered stellar cooling performance, in if there had to be one to put at the top of the list, it’d have to be this design right here. 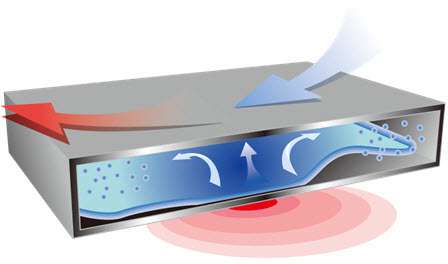 The image does a good job of explaining the cooling design, although it’s rather straightforward. The heat comes up through the middle of the card, spreads across the numerous fins that span it, while the central large cooling fan helps push air both ways, both out the back of the chassis and through the open end of the card, where in this case, the PCI-E power connectors also plug in.

Just a moment ago, I divulged a question I once had regarding the lack of 2GB cards, and in looking up the pricing for this particular model, I believe I have the answer. Currently at one popular e-tailer, a card identical to this is selling for $530, which is $400 above SRP for 1GB models. Oddly, another version that includes higher clocks actually costs less, but it’s out of stock… no surprise.

Without saying, there is a definite premium here, and it’s going to be difficult to justify. It may be easy to justify such a premium for a card that’s +15% faster, but does twice the memory in this case have a chance of delivering such stark gains? It’s unlikely, but that’s what our performance reports are for.

Before we delve further, you can review AMD’s current line-up of GPUs. The Radeon HD 5870 still of course settles up top in the single-GPU category, while the dual-GPU HD 5970 reigns the entire chart alone. Stock clocks for the Radeon HD 5870 are 850/1200, but on this particular sample they’re 925/1225… a fairly healthy boost.

Of all the after-market GPU coolers currently on the market, Sapphire’s Vapor-X on this model is my favorite. It’s comprised of metal, a sturdy frame, large quiet fan in the center, and black… arguably the coolest color for any PC component. 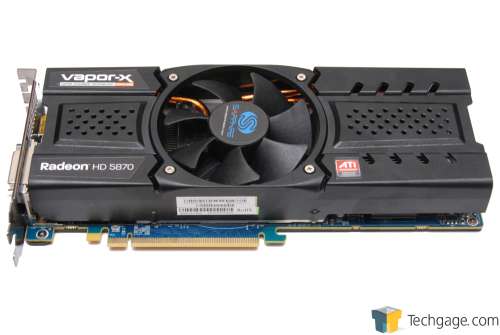 Nothing has changed on the back peripheral-wise, as there are still two DVI-I’s and also a DisplayPort and HDMI, and on this particular card, my finger-prints. 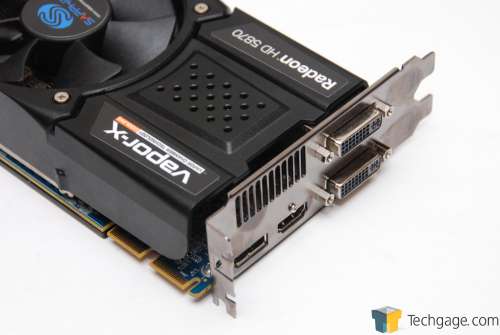 Finally, to give a better overview of the cooler itself, I am going to borrow a photo I snapped from our 1GB review this past November. As you can see fins are plentiful, and the large starkly-angled fins on the fan promise quiet operation and effective results. 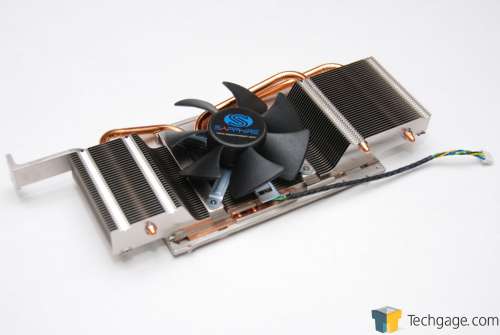 Though not pictured, Sapphire includes two power cables to introduce both a 6-pin and 8-pin PCI-E connector with the help of molex power connectors, a DVI-to-VGA adapter, along with a driver CD-ROM and manual. It’s a very typical bundle, which is a bit unfortunate given this model carries a very hefty premium. With that, let’s move onto our testing methodology and then our benchmark results.