By now, you might be asking yourself, “Where the heck are the overclocking results?!”, and if so, that’s fair. The truth is, this card didn’t overclock that well at all, so it seemed like a waste to devote an entire page just to talk about the lack of excitement where overclocking was concerned. Much less was it worth it to take the time to benchmark the differences.

As we received it, the card had clocks of 925MHz Core and 1225MHz Memory, which is +75MHz and+25MHz, respectively. After much tweaking, we could only push the Core to 940MHz and Memory to 1260MHz. Anything higher, and OCCT’s stress-test would conk itself out within a minute or two, which is something I don’t see too often. Usually OCCT will crash right away, or last tens of minutes before crashing, but never after one or two.

So overall, the card isn’t of much interest for overclocking, and if you do happen to pick one up, I recommend not even bothering, because the performance difference you will be seeing is almost nil. You might see improvement in synthetic tests, but real-world? No, quite doubtful.

How about the 2GB vs. 1GB debacle, then? Well, that’s another page I had hoped to dedicate to the subject, but again the results were rather lackluster, so I didn’t bother. Among the six games we tested here, I also tested Aliens vs. Predator, Dirt 2, Just Cause 2, Metro 2033, Need for Speed: SHIFT and Tom Clancy’s Splinter Cell: Conviction and the differences between the latter five were nil.

Aliens vs. Predator was a major exception though, as the difference was literally 55 FPS vs 72 FPS. I sure didn’t expect that, especially after testing out all of the other games and seeing no difference at all. On the 1GB card, and with the game’s settings at their near-highest values (textures was High, not Very High), the game would lag horribly, and it was simply unplayable. The 2GB card on the other hand was a dream, with no lag whatsoever, not even at the beginning of the level where the 1GB card forces a sit down for about 15 seconds for it to smooth out whatever it needs to. 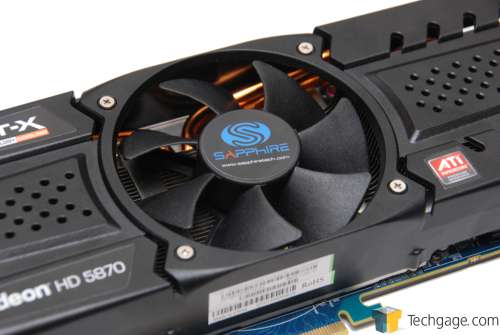 Needless to say, 2GB even today doesn’t make a major difference in our games, even at 2560×1600. I am not quite sure about Eyefinity resolutions, but that’s something I’d like to investigate, as it seems likely that 2GB would be useful, especially if you’re using only a single GPU. Either way, the $100+ premium is a lot to ask for, and difficult to justify based off of what we’ve seen.

If I were to go purchase a Radeon HD 5870 today, I wouldn’t even consider a 2GB card. Even at 2560×1600, the framerates were solid with a 1GB, and barely any better with a 2GB card, if there was a benefit at all. The only reason a 2GB card might be justified is if you only upgrade your GPU every two or more years, because it seems very likely that games down the road will take advantage of the extra memory.

Metro 2033 is what I’d consider to be one of the most hardcore games on the market today graphics-wise, and even it saw almost no benefit (just +1 FPS). Aliens vs. Predator did indeed see an improvement also, but that’s a rarity, because out of the 12 games tested, it was the lone game to take advantage of the extra memory (and for all we know, that could be due to a glutton of an engine).

My recommendation? Stick with 1GB for now, and if you need a particular card, Sapphire’s Vapor-X is ideal, and would still be my personal choice today.