AMD’s Radeon HD 6850 is one of the more attractive mid-range offerings on the market right now, and Sapphire hopes to lure potential buyers in even closer with the help of its “Toxic” edition. It features a customized cooler that runs quiet and keeps temps low, and also cranks up reference clocks for an immediate performance boost.

AMD last month released its highly-anticipated Radeon HD 6800 series of graphics cards, and after taking both the HD 6850 and HD 6870 for a spin, we were left impressed. That launch spawned price drops from NVIDIA, and resulted in both companies offering superb offerings at the $200~$250 price-range. The current crop of cards make it a great time to be a gamer.

Like most launches, there weren’t too many third-party designs available for purchase, but in the weeks following it, some companies began announcing their own customized designs. Not surprisingly, Sapphire was one of these, releasing its pre-overclocked “Toxic” HD 6850 to the wild.

Not only does this card have faster clocks than reference, but the cooler promises better cooling and overclocking potential. We’ve taken a look at many Toxic and “Vapor-X” designs in the past from Sapphire, and more often than not, there is just no comparison to their reference counterparts. We hope to see some of the same kind of domination here today.

At this point in time, the HD 6870 is AMD’s current top-end offering, with the HD 6850 following in its footsteps. The HD 5870 and higher might be faster than both of these, but the newer cards feature other improvements, all of which we covered in our launch article. As mentioned before, AMD will be soon launching the HD 6900 series, but those cards won’t affect the HD 6800 models and their respective price-points.

Here are the specs for all of AMD’s current offerings:

The reference clocked HD 6850 features a 775MHz core clock and 1000MHz memory clocks, while Sapphire’s Toxic model boosts those to 820MHz and 1100MHz, respectively. The SRP for the HD 6850 reference card is $180, but currently most hover more towards $190 – $200. Sapphire’s Toxic by comparison retails for $210, which isn’t too much of a premium given its pre-OC’d likeness and special cooler.

As you can see from the photo below, the Toxic cooler looks nothing like the reference, but features the same shroud design with minimal airholes. The idea is to let the air be forced out of the back instead of in all different directions. This should keep the internal chassis temperature lower while still helping the card keep well within its thermal limits. 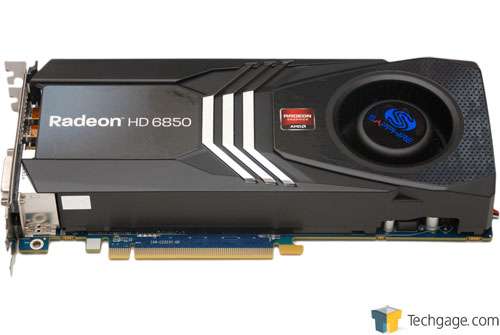 As is typical of AMD’s HD 6000 series up to this point, Sapphire’s Toxic supports up to five displays right out of the box, although six would be possible if you purchased an external DisplayPort expander. 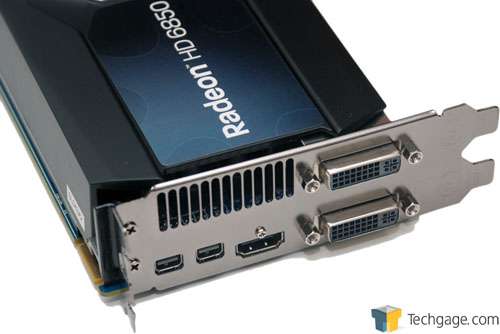 Included with the card is a CrossFireX bridge adapter, VGA to DVI adapter, Mini-DP to DP cable, 2 x 4-pin Molex to 6-pin PCIe adapter and 1.8 meter HDMI 1.4a cable. All in all, most everything is included to get you started on your Eyefinity setup, should that be the route you plan to take.