The biggest focus of the FleX is of course its support for Eyefinity, so to see how it’d fare in such a setup, we pit four of our tested games against a 3×1 setup. Note that the lone exception is StarCraft II, as it doesn’t officially support multiple displays, (Thanks for nothing, Blizzard!).

I had the intention of benchmarking more than just our usual four games for this review, but time got the best of me, and so I was unable to. We will be working on an updated look at Eyefinity in the near-future, though, where we will be testing many different games, so I’d recommend staying tuned for that.

Please note that the screenshots below were captured using the exact same settings that we benchmarked with, so that you can see exactly how the game will look on your 3×1 setup.

First up, Colin McRae: Dirt 2. Although this game worked well at 2560×1600 with “Ultra” detail, we couldn’t have expected that to remain when we cranked the pixel count up by roughly 50%. After first, I set the overall detail level to “High”, but that proved to be less than perfect. It was almost there, but still not close enough. In the end, I decreased the Particles to Low, and Shadows, Objects, Trees and Vehicle Reflections to Medium.

Just Cause 2, despite being well over a year old, is still a brute of a system hog. Thus, we knew we’d have to take on some major tweaking here, and in the end, we did, in order to see truly playable framerates at 5760×1080. To achieve this, we disabled SSAO, decreased Water and Object detail to High, Shadows Quality to Medium and turned anti-aliasing off completely.

Mafia II doesn’t have a great number of graphics tweaking options, so configurating it for 5760×1080 wasn’t too hard. First, we disabled anti-aliasing, and then decreased both Shadow and Geometry detail to Medium.

There’s no game easier to tweak than Metro 2033, as its options limit you to resolution, AA level and overall detail level. It goes without saying that the game simply wasn’t going to be playable with High detail, given it barely could be considered playable at 2560×1600, but fortunately, DX10 Normal worked absolutely beautifully.

Here are the performance results for the settings mentioned above: 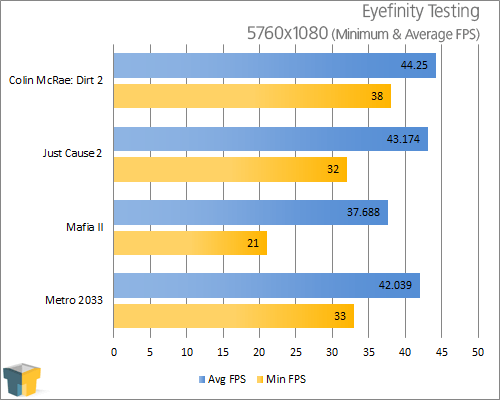 Of all these, Dirt 2 to me was “borderline”, but I hated to decrease the details further. For a racing game to run perfectly smooth, at least 60 FPS is ideal, but at around 45 FPS, the game was still totally playable. Should you want an even greater boost, moving to the overall Medium setting helps, but for me, the “borderline” smoothness with greater detail beats the damn smooth gameplay but with lower detail.

As for the other games, they all worked very well overall – especially Metro 2033 (yes, really).