It’s not too often that a non-reference card brings more than just a unique cooler or an overclock to the table, but the FleX from Sapphire brings something no other Radeon HD 6870 does… a built-in DisplayPort converter. Because of this small addition, users don’t need to purchase a discrete adapter, but can simply purchase this card and be done with it.

But it’s important to mention that because of the tricks employed here, the maximum resolution tops out at around 5760×1080 for a 3×1 configuration, because without a native DisplayPort connection being used, 3×1 2560×1600 is not possible. But, let’s be real… no one is going to purchase a $225 graphics card to power $4,500 worth of displays. At least, I’d hope not.

Eyefinity aside, the FleX HD 6870 delivers the performance we’d expect to see from such a card, and adds on a great cooling solution, and likewise, it improved noise levels. Overall, for those looking to take the Eyefinity route on a budget, the FleX is a no-brainer… it’s a real winner. 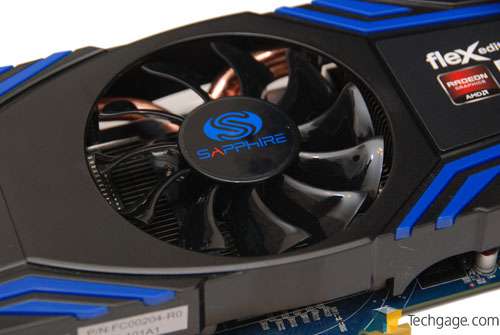 What’s interesting to me though, is that despite the Radeon HD 6870 having great overclocking potential, Sapphire didn’t overclock its FleX even a little bit. Given the sheer number of pixels that are to be pushed through even a 4800×900 resolution, any boost would’ve been an appreciated one, and it would have improved the overall draw of the card even further.

For those not interested in a multi-display setup, the Vapor-X also from Sapphire is the one I’d recommend. It offers similar acoustics and cooling abilities, but costs a bit less. And for those who want a better Eyefinity experience, as in, better performance, you could purchase this FleX if you wanted and then another regular HD 6870 and pair the two together for twice the performance.

For all the things the FleX does right, I’m awarding it our Editor’s Choice award.