The current going price for a Radeon HD 6870 stock-clocked card is about $220, and Sapphire offers a model for just that price as well. Its Vapor-X model, which we took a look at here, is priced about $10 higher. Is that small premium worth jumping on?

If temperatures are a big concern, or the card is to be used in an HTPC-like PC, then I’d highly recommend the Vapor-X model, because as proven in our tests, it’s very effective. While the reference HD 6870 topped out at around 86°C, the Vapor-X shaved an impressive 23°C off of that.

Performance-wise, Sapphire’s Vapor-X card doesn’t deliver higher framerates than what we’ve seen in the past from our reference HD 6870, but that’s to be expected. On this card, Sapphire decided to focus on cooling-ability rather than pushing through a pre-OC, and for most people, that’s a major preference. I’d personally rather know my card tops out at just over 60°C than over 90°C. 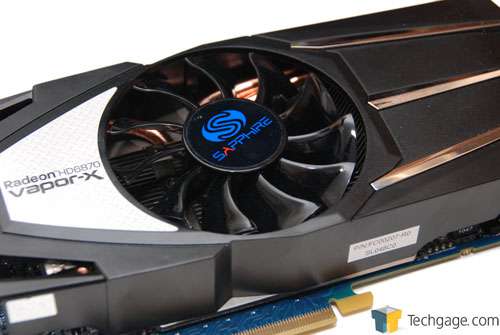 What about the HD 6870 in general? Is it the “best” choice in today’s scheme? As mentioned in the intro, this card essentially has no direct competition at the moment. The closest would be NVIDIA’s GTX 465, but as a last-gen card, AMD’s HD 6870 looks a bit more attractive by default. As NVIDIA’s newly-launched GeForce GTX 560 Ti competes more with the HD 6950, we’re likely to see the company release additional follow-up cards in the near-future, one of which will surely compete with the HD 6870.