As it seems, AMD nor NVIDIA will be releasing new GPUs in the near-term that are going to disrupt the $300~$400 price-points, so it’s still safe to consider either the Radeon HD 6970 or its competition (GeForce GTX 570). In the scheme of performance-per-dollar, AMD’s card delivers the goods, as the GTX 570 performs a bit worse and costs less, and the GTX 580 costs more and performs a bit better.

The real selling-points come down to features and what you are looking for in a graphics card. I happen to appreciate greatly AMD’s Eyefinity multi-monitor technology, but not everyone needs or wants three monitors (I do ask why, though!). AMD’s cards also tend to have better power consumption and temperatures overall, though NVIDIA’s offerings are getting better. 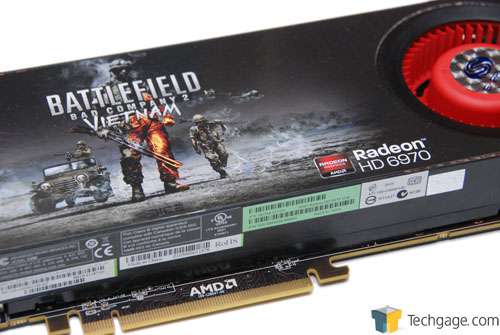 For even more opinions on this versus debate, I recommend looking back to our Radeon HD 6900 series launch article, because I tackle things to a far greater degree there. Is this card for you? It depends on whether you are interested in paying up to $380 for it, but at least it scales in price like it does performance, so that’s not a concern.

This particular model card, including the Battlefield: Bad Company 2: Vietnam game, carries a ~$10 price premium, which for all intents and purposes, is well worth it if you like the genre or series. There’s even a version of this card at Newegg priced at $390 that also includes an 8GB flash drive – another nice perk if you can take advantage of it.