by Rob Williams on September 9, 2005 in Cooling

In a constant effort to increase out cooling and overclocks, companies are always quick to push out new technologies. CPU Coolers with killer pipes are all the rage now, if you wish to stick to air. We are taking a look at Scythes newest offering, the Katana. This ultra-light cooler offers two heatpipes to help with your cooling, so let’s see how good it is!


What makes this cooler different than many though, is the fact that it sits at an angle. Most coolers are like towers.. straight up. The Katana is on a 70Âº angle, which will hopefully prove some killer advantage when it comes to clearing the heat off the CPU quick. Another nice feature, is that this is also a four-way cooler. If you find that the way the cooler is situated is not the best for your case, you can take it back off, and rotate it on 90Âº angles. Depending on your case layout, this could make a difference. 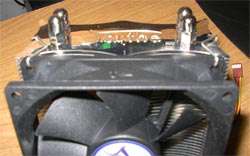 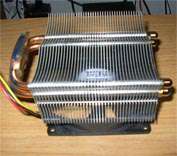 The cooler in general does look quite similar to the VapoChill micro, but it has it’s unique features at the same time. Let’s check out the results from our benchmarks, where we compare the Katana to the stock cooler and Titan Vanessa L-Type.

Because of the ‘odd’ design of the cooler, I had expected a difficult install. In the end, I was surprised by how easy it really was. As usual, I don’t usually pay attention to instruction sheets, because they confuse more than help. The included sheet was no real exception, so I just played it by ear.

First, I had to completely remove the yellow bracket which is used to house the stock CPU cooler. It’s yellow on my Ultra-D, but could be different on your specific motherboard. Included is a replacement bracket, made of solid metal.. extremely sturdy. After removing the protective tape from the bottom of the cooler, you can screw the bracket to it, and prepare to secure to the motherboard. 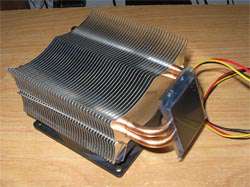 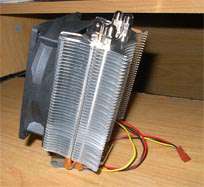 The most difficult part of this installation was simply figuring out which parts went where. The whole process took less than 5 minutes, so it was a very smooth install. Scythe includes a white colored thermal paste with the Katana, which I ignored. The primary reason for not using it, is because it does not come in a tube, but rather a small pouch. This would have required a tool or a finger in order to smooth out the paste over the CPU. I stuck with a tube of Arctic Silver 5, which is a much cleaner way of doing things.