My testing methodology may differ from others. I believe these tests will well reflect the actual raw performance that each card offers. Before any of the testing occurred, the card was first formatted in the camera. The camera being used is a Nikon D80, which is capable of 10 megapixel images.

The first test I wanted to perform was the actual speed differences while shooting in continuous mode. The D80 is capable of 3 frames per second, but that’s generally with the lowest settings the camera offers if you wish it to be completely continuous. For 10MP mode, it will burst 3 – 5 images no problem, but will slow down quick depending on the speed of the card.

To test, the camera was mounted on a tripod and directed towards one of my shelves. After focus was acquired, I put the lens back into manual mode so as to rid out the chance of the camera trying to focus during testing, which would result in inaccurate results. Of course no flash was used, the aperture was set to f/3.5 while ISO stayed at 200. Noise reduction was turned completely off.

Simply put, the shutter release button was pressed down, and then after the 30 second mark was hit, it was released. Each test was performed three times and then averaged out. In the end though, very rarely did the results differ at all between all three tests. JPEG Fine images ranged between 2.67MB – 2.68MB and the RAW NEFs were 6.9MB – 6.92MB. 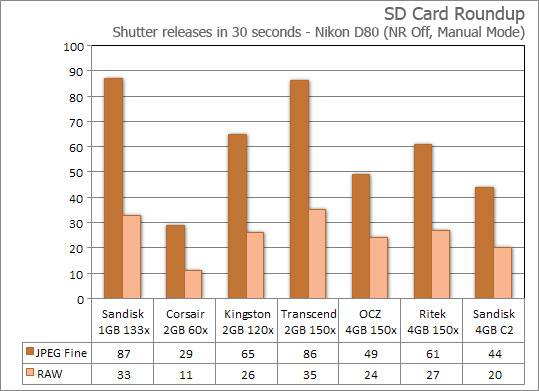 The most impressive card here proved to be the Sandisk 1GB Extreme III card by far, especially with the RAW tests. The camera managed 87 JPEG Fine in 30 seconds, which helped the camera live up to it’s rated 3FPS. Even the RAW proved to be an average of 1 per second. Not too shabby for a hulky 7MB file.

There are a lot of interesting things to note though. The OCZ and Ritek 4GB cards are rated for the same speed, but the Ritek managed to blow the OCZ out of the water, with the ability to take 12 more images in the same length of time. Another thing is the fact that if a 2GB card is rated the same as a 4GB card, the 2GB will almost always win the round. While the Ritek 150x managed 61 images in 30 seconds, the 2GB Transcend mustered 86. Thanks to the lower density, the Sandisk 1GB was able to beat out every other card here, despite it’s slightly slower rated speed.

So the rule of thumb here is, rated speed is not always everything. If you have a card with the same speed but a lower density, it will have better shooting capabilities.

For the second test, I connected the camera to the computer with the USB cable. Though this is not something someone would normally do, a total of 383 images totalling 1GB were first copied over to the camera. After that, they were copied back to the computer in a different area of the hard drive. 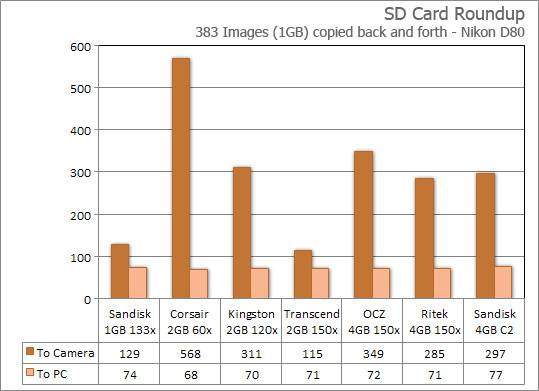 It’s quickly evident that the read speed of the cards don’t differ that much. All 383 images were copied to the computer in around 70 seconds for each, with the slowest card being the Sandisk 4GB SDHC. Copying to the camera was a completely different story, however.

I think the one that stands out is the 60x card, which took a staggering 9 minutes and 28 seconds. Here we can also see that the rated speeds -do- make a difference. The Transcend 2GB 150x card was 14 seconds faster than the 1GB Sandisk, proving that lower density is not necessarily better for this purpose. Comparing any of the 1 – 2GB cards to the 4GB cards though, shows huge differences. Even at the same rated speeds, the Ritek manages to cream the OCZ card!