In order to benchmark the cards directly on the PC, I used the SDHC card reader that was included with the Sandisk 4GB card. I had other card readers on hand, but their results fluctuated far too much in between testing to be reliable. This reader proved to show less than 1% differentials between each run with the same card. 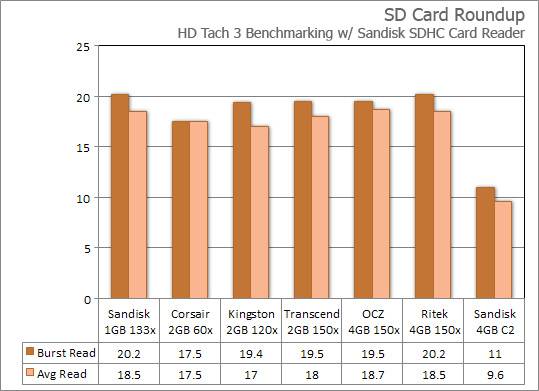 It’s hard to claim one card to be the ultimate winner here, as most were quite close. The Sandisk 1GB and Ritek cards proved to have the best burst reads, while the same Sandisk card and the OCZ 4GB proved the best overall average read speed. Although Sandisks 4GB SDHC card didn’t lag too far behind in the previous tests, it certainly did in this one.

Our last graph was probably the most difficult to throw together. I first scoured the web to find the different prices for each card. The prices listed below are an average of the 3 lowest prices I found, through various trusted e-tailer websites. The OCZ card is the only one that I could not find at more than one store, so it’s $86.99 is an average of itself. Using those prices, I calculated how much moola you’d be handing over for each gigabyte. Simple math. 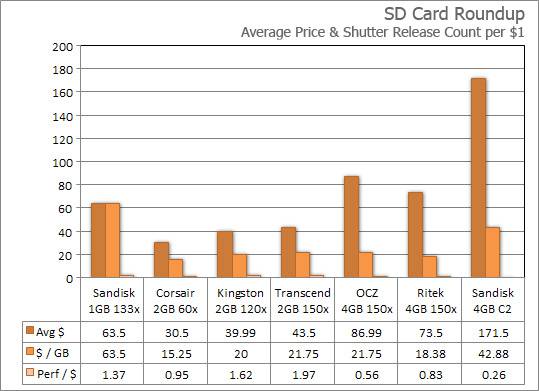 The lowest priced card here by far is Corsairs 2GB 60x, at $30.50, or $15.25 for each gigabyte. For the higher density cards, the Ritek 4GB card proved to be the best overall deal, costing only $18.38 per gigabyte. For the SDHC crowd, you’d be paying a staggering $42.88 for each gigabyte. One thing to mention though, is that this SDHC card is from the Ultra II series, so it’s indeed faster than other SDHC cards on the market. A standard class 2 SDHC card is designed to handle 2MB/s write speed, while Sandisks Ultra II is rated for 9MB/s write.

For the performance per $ portion of the graph, it once again was simple math. Using the total overall shutter releases in 30 seconds from our previous tests, I have estimated how many shutter releases you will get per each $1 you pay for the card. Silly, yes, but still interesting. The best value in this regard turned out to be the Transcend 2GB which allowed 2 images per $1. Not surprisingly, the worst card in this regard is the Sandisk SDHC, which a measly 0.26 shutter releases per $1.

If you were to choose one of the cards we’ve taken a look at today, you will have to decide what’s the most important factor. Performance, or value. If I were to run out and purchase a new 4GB card today, it would no doubt be the Ritek 150x 4GB. The only card cheaper per gigabyte was the Corsair 2GB 60x, and it was also the only 4GB card to keep close to our 1 shutter release per $1 mark.

But if I was into performance, which I am, I’d scale back on the 4GB and stick with the 2GB Transcend which gave us 2 shutter releases per $1. Hands down, it was our fastest card, even beating out the 1GB Sandisk Extreme III. If I wanted higher density, then I would just trouble myself by getting two of the same card… in the end the performance gain would be worth it.

On the 4GB side of things, there are a few things to take into consideration. SDHC is new tech, and most of the time will prove slower than the SD cards that we are used to. It’s also slowly catching on, so older digital cameras will not likely even recognize the card. In order to use an SDHC card, your camera or gadget needs to specify support for it.

But, some companies such as OCZ and Ritek managed to retain the 150x speed, so there is little reason to move onto the slower, and more expensive SDHC. So why does Sandisk not have a 150x 4GB card? Simple… they are following regulations. According to the SD Association, any SD card with a 4GB or higher density is meant to fall into the SDHC category due to compatibility issues. I found absolutely no issues using the 150x OCZ and Ritek cards however, and I snapped close to 3,000 images between them not including the couple thousand images I took with this roundup. So if you wish to jump onto the “stable” and “official” bandwagon, it will cost you. If you don’t care, you can save a load of cash and get either the Ritek or OCZ 4GB cards.

When 8GB cards come out it will be a different story. It’s very unlikely we will see 8GB in SD’s current form, so SDHC will become a requirement as we move forward.

All of that said, taking a look at our charts you should be able to decide for yourself what is the card for you. Personally I’d jump on either the Ritek or Transcend cards… they both proved to be excellent performers at a great price.