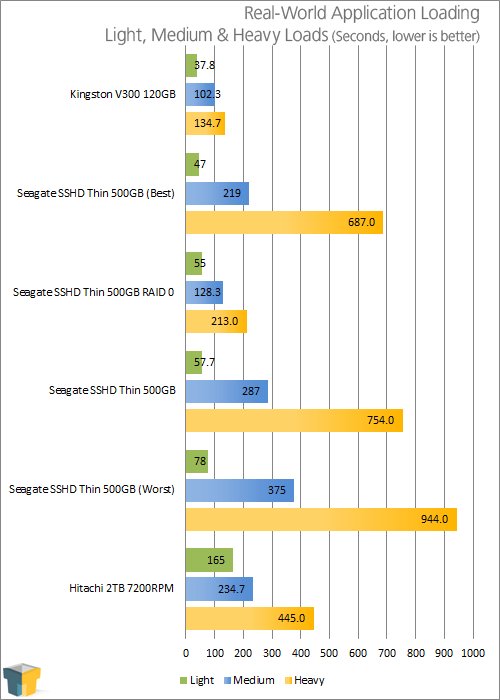 Our batch results are well-suited for caching drives and give some telling results. Firstly, the SSHD Thin is able to deliver fast boot times while loading a couple applications nearly as fast as our sample SSD. Seagate’s SSHD Laptop Thin literally is able to boot and load programs in less than a third of the time of the mechanical drive after it has initially had time to cache the data.

Moving onto our medium test we see the hybrid drive shave a minute and a half once it caches some data, although its best time shaves another full minute off its average result and gives it a 15 second lead over the 2TB drive.

Although the medium results are still good and show that the SSHD will deliver performance far better than a typical 5400RPM laptop hard drive, the limitations of an 8GB cache are coming into play here. Almost 5GB is being written to the disk and more than 1GB in file reads will take place. With 8GB of space to work with, data has to be evicted from cache if new data is being more actively utilized which will lead to some programs bumping others out of that limited 8GB. The best result shows that given enough runs the drive will continue to optimize itself, but for extreme users it is a problem. The heavy batch test again brings the lower rotational speed into play as the anti-virus scan seeks slow down the overall performance.