Considering the fact that network-attached storage (NAS) use is growing at an alarming rate, it didn’t surprise us much last summer when WD released its NAS-bound “Red” series, but it did make us question, “what took so long?”

A NAS-specific hard drive might seem like a gimmick at first, but there are important differences over other low-powered drives that makes them the better and safer solution.

The most important tweak in NAS drives is the reduction of the timeout value for error correction. Low-power drives, such as WD’s Green, for example, are not designed to work with RAID controllers, which are what handles the error-correction in NAS solutions. Thus, if a hard drive and RAID controller are battling each other for error-correction, one can cancel out the other, and the drive can potentially drop from the RAID – that’s the beginning to a bad day.

The unfortunate thing is that these caveats weren’t properly understood when green drives first hit the market. A couple of months ago, a host I had a couple of services with lost a ton of my data (nothing important). In discussing the problem with the company later, I discovered it had been using WD’s Green drives in its servers. After a couple of years, and out of nowhere, there was a problem, and a lot of data was lost. This isn’t WD’s fault, of course… green drives are simply not meant for server use. My host was looking for the cheap way out, and it eventually hit it where it hurts. The issue could have been avoided with NAS or enterprise drives. 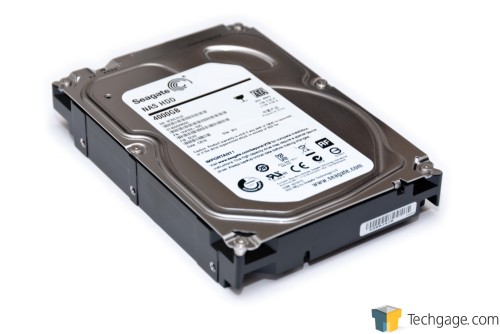 Upon their release, WD’s Red capped at 3TB (1 and 2TB models were also available). I considered it to be a little strange that a 4TB model wasn’t made available at the time, but didn’t rant about it too much since I figured it was right around the corner. It wasn’t until just a couple of months ago that we realized the reason why: WD’s enterprise-bound Se fills the 4TB void.

While WD’s Se series is the better of the two (vs. Red), it’s more expensive. For a consumer wanting to make the most of their NAS, cheaper options are likely to be considered – there’s redundancy in place, after all, so if a 2-year warranted drive dies a little too soon, it can be easily replaced with no data loss. From that standpoint, Red is ideal, but with the lack of a 4TB option, some consumers might not have been too pleased.

Well, Seagate noticed that void and has come to fill it, and interestingly, while WD’s Red series includes a 1TB option, Seagate’s “NAS HDD” series does not. We can’t imagine that 1TB options for NAS use is that popular anyway.

Here’s a rundown of Seagate’s current desktop and enterprise line-up:

Would you believe that this single table took me longer than an hour to create? That’s entirely thanks to how difficult Seagate makes it to find certain information. Transparency clearly isn’t the company’s strong point. That aside, I found that understanding Seagate’s line-up was much more difficult than WD’s – I guess I kind of like the simplified naming scheme on the WD side (Red, Green, Blue, Black, Se, Re) better than Seagate’s, which sometimes doesn’t even stay consistent with itself. Did you know that “Enterprise Capacity” is being sold as Constellation ES.3 virtually everywhere? Seems needlessly complex.

The best-comparable drive to the NAS HDD in Seagate’s own line-up is Desktop HDD – at least if we’re talking about the 4TB model. While all three NAS HDD densities are spec’d at 5,900 RPM, only the 4TB model in the Desktop HDD series is. Similar to what we saw in WD’s line-up, the NAS variant costs a bit more TB for TB, but it has the worthwhile perk of having another year added to its warranty (3 vs. 2).

NAS HDD is recommended by Seagate for those at home, running a NAS with 1 – 5 drives, while Constellation CS drives are better recommended for small business, where 6 – 8 bay NASes might be used. For mission-critical NAS-use, such as with surveillance, Constellation ES.3 drives are Seagate’s recommendation (as would be ours, or WD’s Re drives).

Hard drives from different vendors might have various tweaks to their formula, but it’s safe to say that WD’s NAS drive and Seagate’s NAS drive are not going to be too different for the average consumer. So, pricing comes into play. Where do we stand?

For a 4TB NAS offering, there’s just one option, so that will rule WD out for some people (WD’s enterprise Se 4TB is $280). Perhaps due to the fact that they’ve been on the market for a year, WD’s Red costs a bit less than Seagate’s NAS HDD for the 2TB and 3TB options (saving $19 and $10, respectively).

We won’t go into each and every feature the NAS HDD series includes, because little has changed over the years (that the companies can tell us, at least). NASworks is the leading feature on this particular series, which as we mentioned before tweaks the error correction to make sure it never becomes a problem, reduces vibration and includes more advanced power profiles. All very good stuff.

While this won’t affect the home user much, it’s worth quickly covering what the NAS HDD series lacks vs. Constellation. Performance is at the top of the list, with a reported 140MB/s for NAS HDD and 160MB/s+ for Constellation. NAS HDD also lacks an internal secure erase (important for truly sensitive data), lacks the self-encryption of the Constellation ES.3 series and doesn’t have quite as robust vibration-reduction solutions. Again though, nothing here is likely to affect a home user, especially overall performance, given 140MB/s exceeds your Gigabit network’s peak of 125MB/s.

On the topic of performance, let’s see how Seagate’s NAS HDD fares there.