When the time comes to pick out a brand-new hard drive for a PC, most consumers tend to look past everything except the densities. While most enthusiasts care a lot about performance, regular end-consumers usually don’t even know there’s a difference between drives. Well, as we’ve seen throughout all of our tests, there’s a clear difference between drives, even those that have identical rotational speeds. But, aside from these two things, there are a couple more aspects to look at: Temperatures, Acoustics, and Power Consumption.

Arguably, temperatures are the most important factor of the three, as if a drive runs too hot all of the time, then its life span is going to be decreased. Not to mention, it will add unneeded heat to the inside of your PC, causing everything else to run even hotter. Even in a chassis with superb airflow, hard drive heat remains a problem, especially when one is dealing with transfers for a long period of time. Most companies will agree that a hard drive can run up to 50°C and still remain reliable, but if your drive runs hotter than that, it’s time to figure out a solution.

Then there’s the acoustics, and if you’ve ever had a loud-running drive, then this is likely a factor that’s important to you. Although all drives have improved in this regard over the years, it’s still not rare to hear a hard drive doing its thing, especially when the room is quiet. Lastly, there’s power consumption. Admittedly, power consumption tends to be a non-issue for most people, since they draw such a low amount of power compared to CPUs, GPUs and other components, but we include the results for sake of interest.

All three of these tests are conducted at the same time. After the PC is boot up, we allow five minutes to pass while Windows settles down, at which point we monitor the idle wattage, acoustics and temperatures. To stress the drive, we load up our Iometer test and let it do its thing, capturing the highest figures we see for each test. The temperatures are captured with Everest Ultimate Edition 5.3, while our power consumption is captured with a Kill-a-Watt EZ, dedicated to its own socket, with only the PC plugged into it. We capture the drive’s acoustics with a SL-5868P audio meter, with its microphone located a few centimeters above the drive. 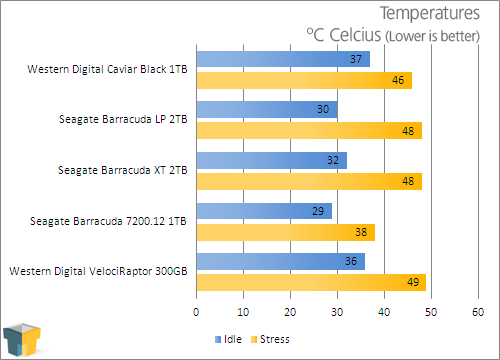 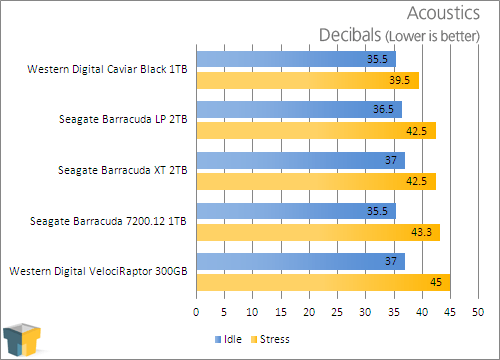 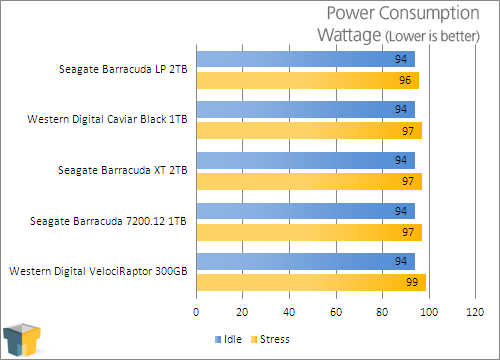 Another round of testing and we see the XT finishing pretty much in the middle of the pack. All of these results show this drive is well within all tolerable standards. Most of the criteria here are not overly important to most of us, but it is nice to know that the XT can stay with the pack and give great results with acceptable attributes as well.