Page 2 – Getting Past the 2TB Limit; Temperature Issues

When 2TB hard drives first hit the scene, I began to wonder how much further we’d be able to go with current designs. After all, storage vendors had to work hard to pack that much storage in the same space, so what would have to be done to increase that by 50%? Well, it became clear earlier this year that simply packing 3TB of space into a hard drive wasn’t going to be the only hurdle. Far from it.

The new issue was the simple fact that most computers couldn’t properly see all of the storage space available on a hard drive of more than 2.2TB. The problem stems from limitations within the Logical Block Addressing (LBA) scheme that’s prevalent in almost all of our hard drives today. Believe it or not… a form of a 32-bit limitation strikes again.

A solution is the GUID Partition Table, or GPT for short. This is an Intel-created standard that’s been around since the late 90’s, but hasn’t been used to a great degree up until this point. One massive exception is Apple, as it has been using GPT as the default scheme for the hard drives in all of its Macs sold since first partnering with Intel. 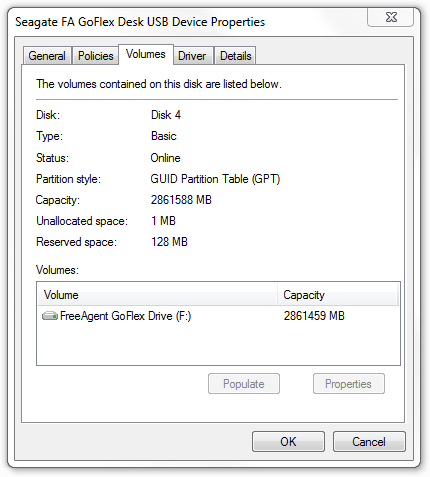 Though GPT was designed to be used alongside the Extensible Firmware Interface (EFI), a replacement for the traditional BIOS, it can be used with current BIOSes as well. The major catch, though, is that the drive will not be bootable, due to the BIOS not looking towards the correct sectors for the boot loader. Current operating systems, including Windows Vista & 7, Apple’s Mac OS X, and also current Linux distros, can handle GPT booting just fine. But again, this will only be the case if you have a motherboard equipped with EFI. Currently, those are few.

GPT brings more to the table than just storage limit increases, though. No more is the limit of four primary partitions per hard drive, as GPT can handle up to 128, which I’m guessing is going to be more than enough for most people (I couldn’t imagine dealing with more than 4, much less 128!). There’s also added data security, as the GPT is stored once at the beginning of the drive, and then again at the end. That increases the chance of data recovery in the case of an accident.

With GPT taking care of those problems, another arises… 512 byte sectors. First brought to the public’s attention by Western Digital earlier this year, all hard drive vendors are going to be moving to 4K sectors in the near-future to both reduce overhead and increase space, along with bypassing various other hurdles along the way.

But the situation with this drive isn’t quite so simple, because it doesn’t actually use 4K sectors, but rather 512b as usual. Kind of. The drive emulates 4K transfers during the handshaking process. So even though the drive isn’t truly using 4K sectors, the computer will see that it is. Here’s the result of an internal hard drive of mine and also the FreeAgent when reading fdisk’s output in Linux:

Partition 1 does not start on physical sector boundary.


As you can see, the standard hard drive notes 512b sectors, while it’s 4096b (4K) for the 3TB drive. Because fdisk isn’t familiar with GPT at this time, it complains also about partition misalignment. In Linux, partitions on GPT drives should be handled with the latest versions of Parted or GParted.

Speaking of Linux, although Seagate doesn’t mention whether or not the OS supports the FreeAgent GoFlex Desk, it does. The only thing that it doesn’t support is Seagate’s software, as it only supports both Windows and Mac. 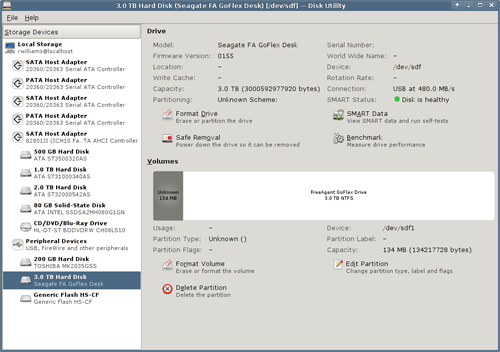 Interestingly, I managed to access the drive’s SMART information from under Linux as well, but not with HD Tune in Windows, or even Seagate’s own SeaTools. This is the first time I’ve ever been able to access the SMART information via an enclosure, so that’s quite notable. The first thing to stand out to me though was the noted temperature… a staggering 64°C. 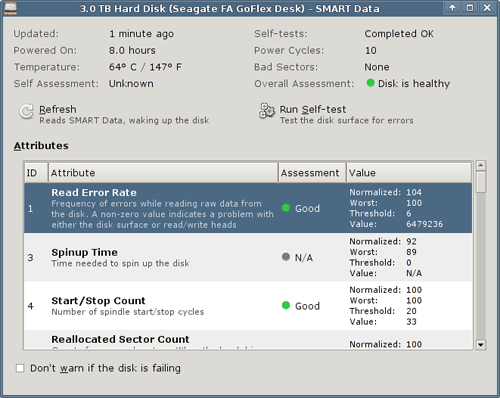 At first, I thought that the reading was bad, but later on, I hauled the drive out of the enclosure and after it cooled down for a couple of minutes, I recorded 52°C with a temp gun. If it was that hot on the outside, especially after a couple of minutes of cooling down, then 64°C does seem believable. And according to the SMART information, the highest temperature reached was 66°C.

With these technical bits out of the way, let’s quickly tackle the included software.