Before we jump into the software that Seagate includes with this drive, we should talk about the actual amount of total storage space that the FreeAgent GoFlex Desk “3TB” offers, because as we all know too well, 1TB never quite equals 1,000GB (it boils down to the MiB vs. MB battle and the way hard drive vendors measure storage space). 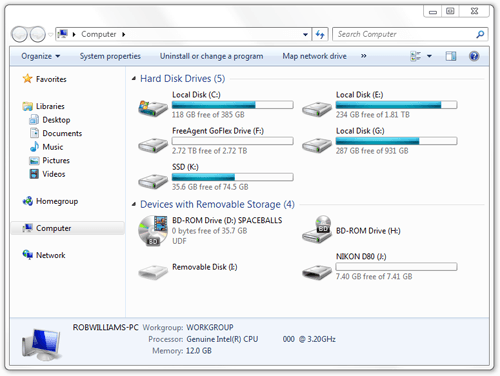 If you load up the “Disk Management” tool inside of Windows and then delete the one monolith partition, you’ll wind up seeing one partition that uses up 2TB and another that uses the remaining space: 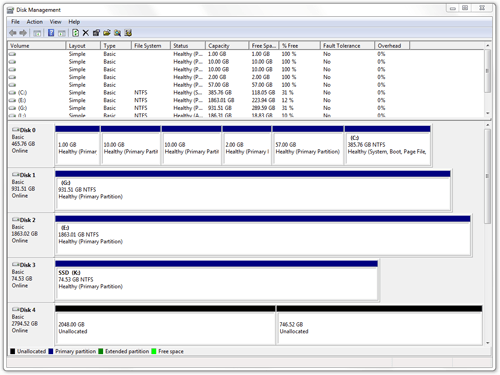 To “fix” the drive, you just need to right-click the disk and click “Convert to GPT Disk” and then format it again. Once the drive is formatted, it should always act like an everyday drive, and in all of our testing outside of benchmarks, that was the case.

For the sake of keeping your PC backed up, Seagate employs the work of Memeo, a company specializing in backing up data and other things. There are two versions of “Memeo Backup”, with the entry-level version included here. For all intents and purposes, the standard version will more than suffice for the average home user.

Once the application is installed and opened, it will begin scanning your primary hard drive for documents, photos, music, movies and “other” important bits of data. Once everything is tabulated, you can simply click “Start Backup” and let it do its thing. 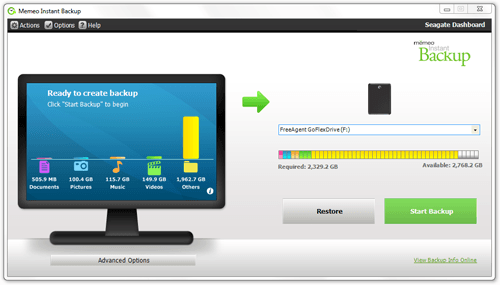 Adding a folder to the backup scheme is rather simple, and only requires dragging and dropping it into the advanced options drive section. Here, you can also see how much data is going to be backed up from each drive, and also encrypt your backed-up data if you appreciate that kind of security.

As far as I can tell, there is no automatic backup solution included here, despite it being mentioned on the product page. Once Memeo is installed, you’ll have trials of other software, including Memeo AutoSync, which is an automatic backup solution. That costs $30 + $5 to purchase though, and seems rather hefty for what’s at the end of the day is a simple task. Syncing isn’t rocket science.

Aside from the Memeo software, Seagate has what it calls the “Dashboard”, although it’s little more than a gateway to the Memeo apps. I was hoping that there would be a format or SMART tool available here, but no cigar. 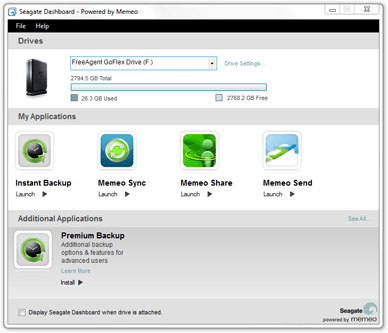 With our look at the included software out of the way, it’s finally time to take a look at performance!