If you demand to be mobile and still have the hard drive space you need, then you should look at the Seagate Momentus 5400.3. It’s the first mobile drive to be equipped with a full 160GB of disk space, and still retains great speed.

PMR is a technique that became well known early last summer. As mentioned in the intro, the problem mobile hard drives face is the amount of storage they can handle. People wanted a lot more space than was currently being given, but it became feasibly impossible to fit much more storage using the classic method. Of course, due to technology moving forward at an alarming rate, it’s no surprise to see storage devices including more gigabytes in less space.

During the past decade, it’s been a very common thing to see disk space double over the years. I remember purchasing a brand new 8GB Western Digital drive for around $300US, only to see 20GB drives the next year for the same price. On the desktop side of things, we are now finally seeing drives hit a whopping 500GB, and that number will rise in due time. The storage market, like any other tech field is ever evolving though, so what $300 did even 5 years ago will get you 10x the performance today.

Because we desire more and more hard drive space, engineers ran into the problem of not being able to fit a larger amount of storage into the same form factor. Sure, it may be possible to fit 1TB into an enclosure, but it would still likely have two drives at the heart… or be huge. Things are worse on the mobile side of things though, because unlike their desktop counterparts, these weigh just a quarter of a pound, and don’t exactly offer much breathing room. 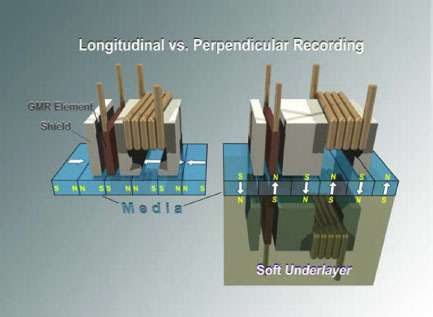 In order to achieve the ability of cramming more storage into the same amount of space, engineers had to figure out a way to fit more data bits into the same area. This of course presented it’s own set of complications. If data bits are small enough, the magnetic energy which holds that bit in it’s place may become small enough so it can’t magnetize properly. 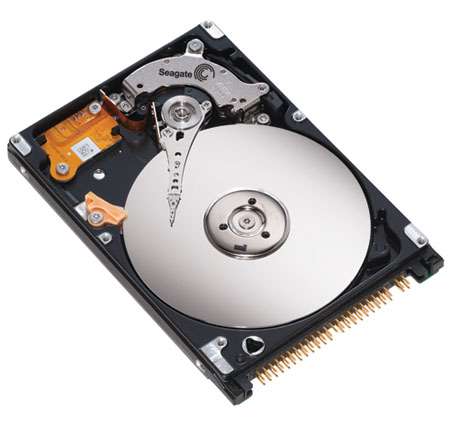 On normal hard drives like the one in your desktop, the magnetic energy lies on the disc’s equal plane. As you may have guess, this new method is places the magnetic energy perpendicular to the plane of the disk. This way, the data bits are represented as upward/downward magnetization. Because of this, the media is deposited underneath the soft magnetic layer that functions as part of the write field. This technique sounds complicated, but it allows much higher density recording than the longitudinal method. The sample picture above is from Seagate’s site and can explain it better than words.