If you demand to be mobile and still have the hard drive space you need, then you should look at the Seagate Momentus 5400.3. It’s the first mobile drive to be equipped with a full 160GB of disk space, and still retains great speed.

PC Mark 05 goes an interesting route in its way of testing. It takes five different hard drive read and write tests and calculates an overall score. All of the results below are in Megabytes/second. If PC Mark is anything to go by, the 5400.3 would be around 15% slower overall than the Hitachi. Still not bad at all! 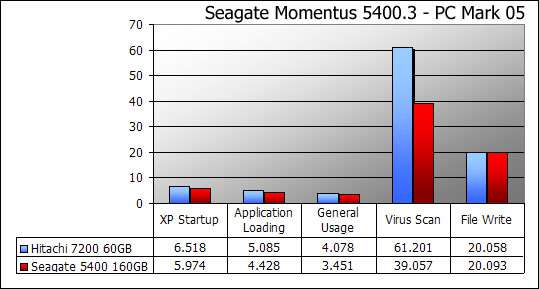 Here are some extra benchmark results that I did not include in the above graphs due to the fact that it would offset the bars heavily.

All of the results are right on par with what’s expected. Because of the larger density and slower RPM [compared to the Travelstar], I thought the drive was going to prove slower than it had. Overall though, the drive performed nicely. According to our friends at Big Bruin, the drive is only a tad slower than the previous 5400.2. It could be that the extra storage space slows the overall performance, but not by much.