How do you make one of the best mobile drives on the market even better? Make it faster, of course. We are taking a look at Seagates latest high-end notebook drive, which offers not only high density, but high-performance.

The moment of truth always lays with real world tests. Technically, they should always scale similarly to synthetic benchmarks, but it gives us a more realistic result. To test, I have four sets of files and simply copy each one from one portion of the drive to another. Here are the four file sets and how they are named in the graph:

The reason we test with solid files and folders is to see how well the drive holds up over time. Copying a 7GB folder is not a small process and tends to slow down as time passes. 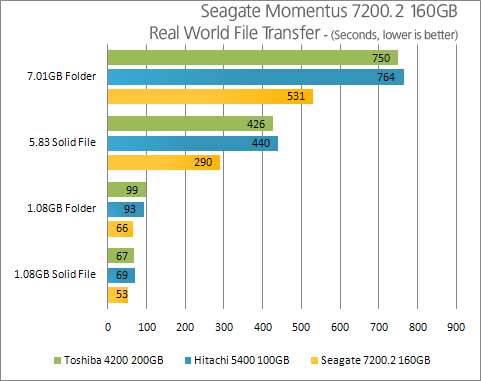 We could stop testing right here if we wanted to… the benefits of the drive are clear as day. The Seagate proved far faster than the others throughout all of the tests. Not surprising, but it did perform better than I had anticipated.

Since a 7200RPM drive is a dream for gamers on the go, I wanted to see how this drive proved beneficial with load times. For this, I chose to use Half-Life 2: Episode 1 (ep1_c17_02a), Oblivion (Cloud Rulers Tower) and Ghost Recon: Advanced Warfighter (Contact!). The timer was started as soon as I clicked to load the level and stopped once the game was in a playable state. 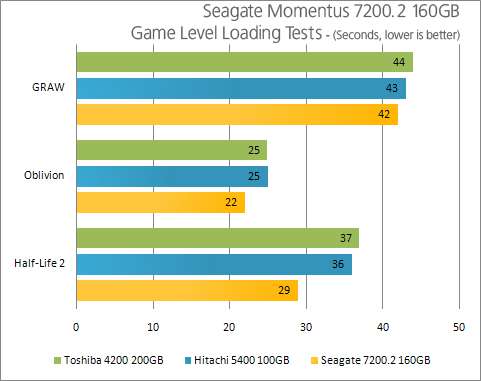 I think our question is answered. Yes, you will most definitely be seeing differences in level loading with a faster drive. It didn’t make a great different in Oblivion or GRAW but was most notably faster with Half-Life 2.

Each drive is different, and because of this, some will prove better for lower CPU usage than others. This doesn’t matter that much on a desktop, but in a notebook it would result in a slightly faster battery drain. Even still, these numbers are not -that- important in that regard unless you are accessing your hard drive constantly. 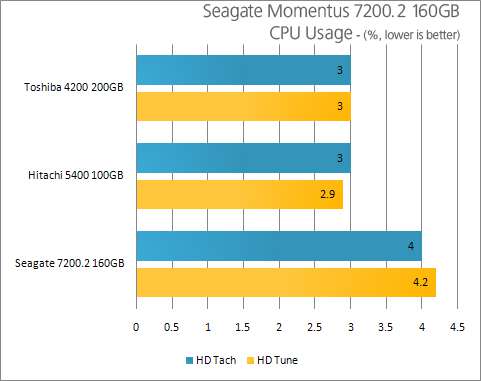 As expected, the 7200 drive proved to hog more of the CPU than the others, both HD Tune and HD Tach agree on this one.

For our last test, I wanted to see how the latency on this fast drive compared to the 5400 and 4200 models. For this, I used Sandra, HD Tune and HD Tach. Three opinions are better than one. 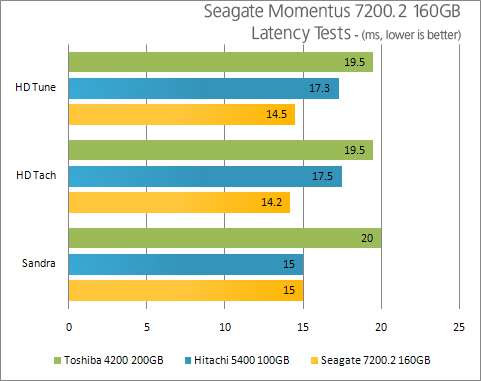 Seagate has once again delivered a product I am completely pleased with. When I first received the 160GB 5400RPM drive last year, I loved the fact that it offered the most amount of storage compared to anything else on the market. It took near eight months after that release before anyone else released a larger drive. That was Toshiba and their 200GB, which we used for our comparison tests here today. Though larger, is was only 4200 RPM.

Now that a 7200RPM version of Seagates 160GB drive is available though, people can now have both high storage and high performance. This drive proves that the storage market is not slowing down, and I am hoping that we will see notebook hard drives surpassing even 200GB soon enough. If you have a newer notebook that offers the ability for two hard drives, you could easily get two of these and RAID 0 or RAID 1 them. That would be some serious mobile performance.

This is a great drive, and for this I am awarding it a 9 out of 10 along with our Editors Choice award. The thing that pushes this drive over the edge is it’s value. Seagate told me that the SRP will be $188, which equates to $0.85 per GB. Currently, both Hitachi and Seagate sell 100GB 7200 RPM drives for $110, or $0.90 per GB. So despite this drive having the highest density on the market, it also proves to be a better value than the other 7200 models. If you are in the market for a new notebook drive and rely on high performance, there’s nowhere else to look. You want Seagates Momentus 7200.2 160GB.