As computer technology continues to advance, there is no doubt that the trends toward mobility and portability are by far the largest on vendor minds. Being tied to a desktop is quickly becoming something that many people just cannot do. The world is undeniably heading towards a computerized future and I even foresee the day in my lifetime that hand-writing will become obsolete. With even elementary schools beginning to focus heavily on the computer as a tool, there is no doubt we’ll rely on some form of computer for everyday life needs sooner rather than later.

One of the major stumbling blocks has been the fact that portable computers were just not powerful enough to fulfill the needs of most users. That is no doubt been untrue for some time. The modern processor has been able to scale down in power needs quite well and there are a plethora of low budget high-power notebooks/netbooks available for our consumption. Using a portable PC as a desktop replacement is now not only a viable option, it is an option even the mass market can consider.

The other major area of concern has been storage space. It seemingly took forever for densities to reach any useable levels. Now while I agree that many of us keep more data than required on our hard drives, there is also no reason we should not be able to have as much as we desire. Unfortunately, there has been one major tradeoff with notebook/netbook mechanical drives: speed. Even 7200RPM versions just don’t have the speed that their desktop counterparts enjoy. For those transferring large amounts of data or requiring high access speeds, there really has been no viable solution other than the highly priced and density limited SSD drives. 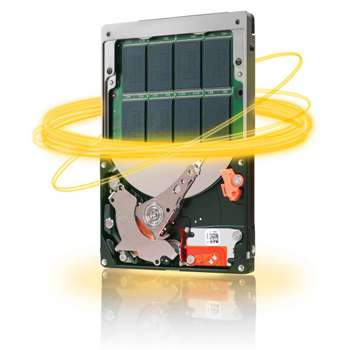 Speaking of SSD drives, they do have the potential to eliminate many of these stumbling blocks for us. No one can deny their speed and storage densities have begun to creep up to 500GB+ levels. Manufacturers have recently been able to refine their controllers to even make them fairly reliable. Sadly, their cost is still just out of reach for most of us. As I have said before, until they are available for under $1 per gigabyte, they are just not going to be accepted by the mass market.

Mechanical storage has basically hit its uppermost limits when it comes to speed. Drive controller technology has made small steps forward, but nothing mind-blowing has been achieved. The SATA I bus has barely been fully saturated, never mind SATA II. The recent step up to the newest SATA III bus has been unofficially accepted as only benefitting SSD technology. Even our own in house testing has verified that there are little offered in gains for mechanical storage. Something else has to change to make up that difference, especially in the portable world.

The best possible solution so far is not something new. We have seen various manufacturers give this technology some for over three years with varying success, but to date no one has really hit the nail on the head and got everything working just right. In theory, this is the perfect solution to both speed and density needs, the problem has been underwhelming performance coupled with less than reliable results.

Seagate threw its hat into the hybrid storage game this year and with it made some really bold claims. From being able to keep up with desktop speeds to cutting access times dramatically, the company really seemed to be ready to give us all something special. Seagate has no doubt become one of the premier manufacturers of storage devices so to me it seemed like the likely company to pull this off.

Using 4GB of SLC NAND on a production 7200RPM 32MB cache Momentus platform, Seagate is giving us the best of both worlds in a small form factor (SFF) package. The NAND memory is only used for reading purposes, no writing tasks are routed through it. The built in controller puts the most frequently accessed data on NAND while everything else gets routed to the mechanical section. Seagate’s firmware does an excellent job of this and within a few cycles the drive quickly adapts to the user’s needs.

For today’s review we have the 500GB Momentus XT in our labs along with the regular 7200.4 and 5400.6 variants as to give a better comparison between current available technology and the new Hybrid drive. We will also be comparing our results with all of our previous mechanical storage so you can get a full picture of just how they all stack up against one another.