Seagate announced a new addition to their Savvio lineup earlier this week, the 15K. These new drives boast impressive specs all around, including the fact that it’s contained in a 2.5" frame. Even though these are the fastest drives available on the market, they use far less power than their 3.5" counterparts.

When it comes to computer storage, no one leads the pack quite like Seagate. This is thanks to the fact that they are continually the first out the door with new drives that boast higher densities and good reliability. In the past ~16 months we were graced with the 160GB Momentus laptop drive and also the 750GB Barracudas. We now have a 1TB Barracuda on the horizon.

Enterprise storage is one of Seagates key markets however, so that’s where they shift a good deal of focus. Earlier this week they announced their Savvio 15K line-up, 15K meaning 15,000 RPM. The reason this is of interest is because the Savvio comes in a 2.5" frame, unlike all other 15K drives that settle in the same 3.5" chassis like normal desktop drives.

When briefed on the phone, I immediate questioned, “Is this a notebook drive?” to which the reply was, “Haha, no. [You damned noob]” How great would it be to have a 15,000 RPM drive in your notebook? Not great, as it turns out. Even though the technology is completely feasible, the power draw makes it unacceptable for use with a notebook computer. If the laptop is plugged in it shouldn’t be a problem, but that’s not normally the goal of a “portable” computer.

What does the Savvio boast? According to Seagates numbers, the Savvio is the fastest, most efficient drive available. Period. They note that its 35% faster than a 10,000 RPM 2.5" and even 10% faster than a 15,000 RPM 3.5" desktop drive. The fact that it’s faster than a 3.5" drive of equal RPM shows that the Savvio implements new technologies. Improvements are continually being made, which means we may see -faster- and better overall desktop drives in addition to server models, as a result. If you thought the storage market was good now… it’s only going to get better. Especially over the next few months.

As mentioned in our intro, the Savvio claims to provide the highest performance per Gigabyte and watt. So, it uses less power than 3.5" drives and performs better. Where’s the loss? The ultimate density is not as high as 15K drives, which currently have 150GB models available. Instead, when the Savvio is released later this quarter, we will see both 36GB and 73GB models… not much of a surprise. Also at this time, pricing is completely unknown. However, compare the fact that equal speed 73GB desktop drives retail for between $350 – $400, seeing a price tag of at least $500 for the 73GB Savvio will not be that surprising. 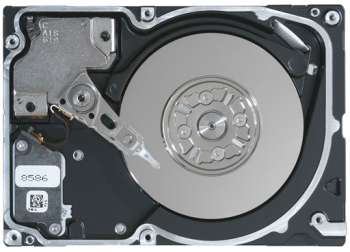 Who’s the Savvio designed for? At it’s heart, Savvio is an enterprise drive so it’s designed for use anywhere a high performance drive is required. This could be large servers or HDD intensive workstations. Although the Savvio at its release will lack high density of larger drives, it’s designed primary for speed and performance per watt. Most uses for this drive don’t require large densities, which is why the 36GB may very well outsell the 73GB until prices go down. High-traffic file servers (think thousands of connections) would benefit most from the larger density, in addition to far more than one drive.

Desktop users with big wallets don’t need to fret though. If you want that blazing performance and for some reason don’t want the larger 150GB 3.5" drive, you can still use the Savvio in your normal desktop PC with a serial attached SCSI (SAS) card. This is my solution, and the one that I will be using in our full review of the drive next month. This is still not a feasible solution for most though, as these cards get rather pricey themselves.

Savvio Specifications (Based on the 73GB)

The fact that a 2.5" is capable of 15K RPM is impressive. Consider the fact that most notebook hard drives are 5400RPM or lower, but that is more to save power rather than to halt performance. The rule of thumb is that the higher the density, the lower the overall speed. This was proven a few months ago when I took Toshibas 200GB 2.5" drive for a spin, which has a rotation speed of 4200. I consider a 74GB 2.5" capable of 15,000 RPM to be an engineering feat.