No matter what you plan on buying there are always a few brand names that stand out from the crowd. From clothing to cars to, yes, even computer cases, there are some companies that are so well established that it sometimes seems like people are tripping over themselves to buy a product simply because of the name.

So what’s in a name? I hope to find out as I look at a case from Sentey, a company that many may not know of. A quick look through its product list shows some unique offerings including the Arvina series, one of which is on the review table today, the GS-6400B. This case belongs to Sentey’s ‘Extreme Division’ series so let’s see just how extreme it is and if potential buyers should look past the name stamped on the box.

Also available in high gloss black or red, the blue version of this steel and plastic constructed case supports micro-ATX, ATX and extended-ATX motherboards. We don’t generally don’t show any packaging during our reviews but it’s nice to see that extra attention has been given to how a product ships with the Arvina series coming wrapped in a cloth bag. 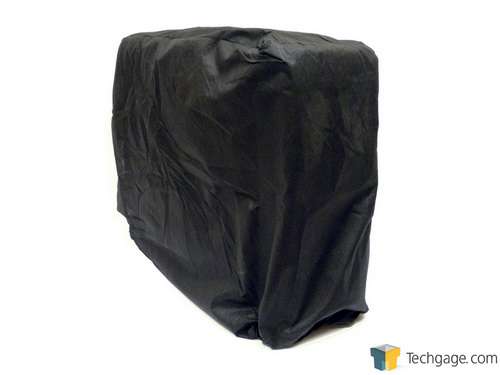 The box that our review sample arrived in was battered and beaten (thanks, UPS!). The foam end caps and cloth bag that the case was wrapped in did a great job but the shock from the bumps and drops had knocked out two of the drive covers, scratching them in the process along with a few nicks at the bottom of the front panel. After a further damage check and fix up, the case was ready for action. 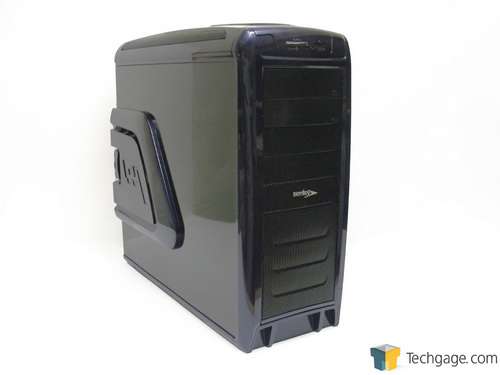 The front of the GS-6400B features a 140mm blue LED fan at the bottom hidden behind a black mesh cover. This cover extends all the way to the top with a silver Sentey logo front row center. Just above the logo is where the four 5.25″ drive bays begin. 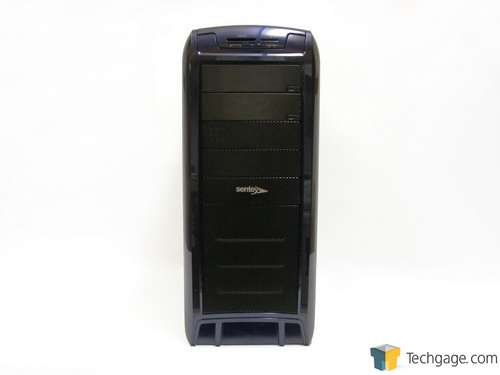 The top two drive bays have a nice little surprise in the form of flip down covers. In the bottom right corner of each of these is a button that makes contact with the open/close button on the optical drive installed behind it. When the tray comes out, the cover flips down, so this would be a great solution for those who like a clean exterior or have an optical drive with a different coloured bezel. At the very top of the front panel is a card reader that can accept CF/MD, XD, SD/MMC, TF and MS/M2 cards. The entire mesh area of the front with the exception of the top two bay covers has a removable foam dust filter to keep the bunnies out. 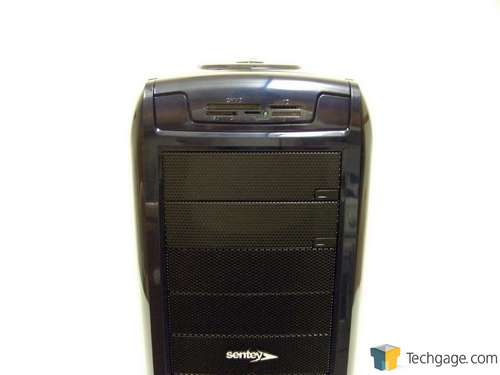 Moving around to the left side finds the panel held in place with two plastic tipped thumbscrews. Once these are removed there is also a latch system that keeps the panel firmly in place. Pulling the release latch towards the back of the case disengages the catch so the panel can be slid back and pulled away. The latch is built into a plastic accent with an odd, transparent design that serves two purposes. First, it allows for a bit of style by letting light from the internal LED fans to shine through and second, it acts as ventilation for said fans thanks to the small holes around the outer edge. 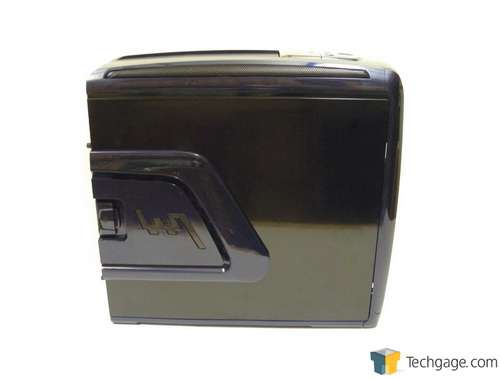 Around the back at the top left corner is the motherboard I/O opening. To the right are two holes with rubber grommets for running hoses if water cooling is used and a 120mm blue LED fan below. Moving south, there are seven vented, break away PCI slot covers and to the right, a small vented area. The red tabs that can be seen are from the tool-less retention mechanism for the PCI slots. Pulling the tab out releases the “lock” so cards can be added or removed. You’ll see why I put the word ‘lock’ in quotations a little later on. Finally, as usual, at the very bottom is the opening for the power supply. 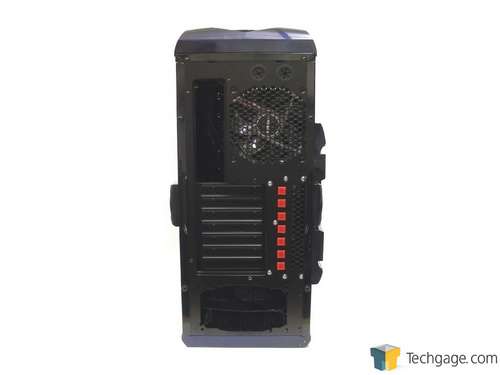 The right side doesn’t have much going on except for the same quick release latch that may very well become a favorite feature on this case if fast, frequent access to the interior is needed. 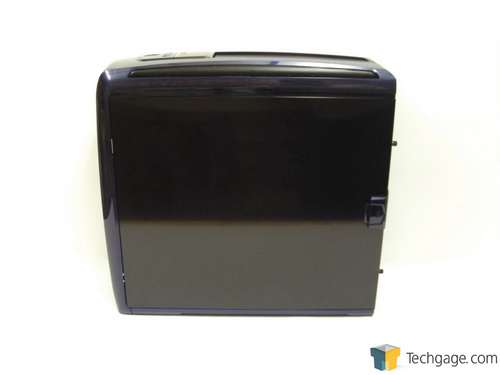 On top at the front is a large power button that glows blue when the system is powered on. Behind it are four silver buttons that act as on/off switches for the four channel fan controller, each with a red LED to indicate if the channel is active. The clear cover behind the fan controller slides back to reveal two sets of nicely spaced USB 2.0 ports on either side of the 3.5mm microphone and headphone jacks.

To the right are the red hard drive activity LED and a small silver reset button above it. Need more? Behind all of this at the back are hot swap SATA power and data connections and an eSATA port. The rest of the top is covered by a mesh area that hides two 120mm blue LED exhaust fans that can be swapped out for two 140mm fans if the user wishes. 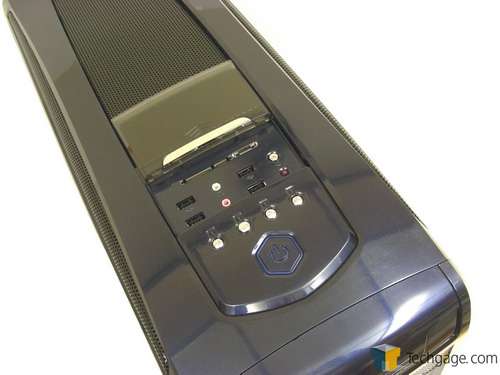 The bottom of the case is dominated by a plastic filter that runs about 3/4 of its length behind the bottom panel. This filter can be removed but requires the user to remove several screws from the inside. At the front are two rubber pads on each side and another on each side at the back to help keep the case from sliding and absorb vibration. 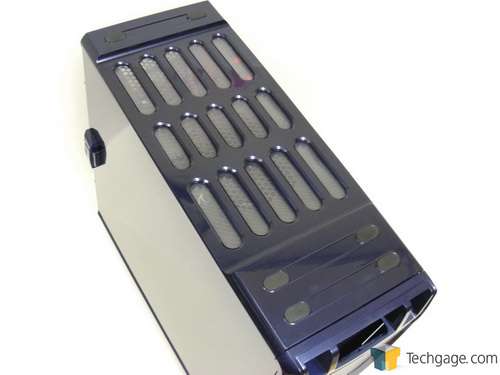