The front panel is removed by pulling out on the bottom and then on both sides near the top. The 140mm intake fan is at the bottom behind a honeycomb grill and the breakaway but reusable 5.25″ internal drive covers are just above. The inside of the front cover shows the removable dust filters in place for the fan and each of the drive bays except the top two. At the very top is the PCB for the card reader and the wire that runs to the system to provide connectivity. I wasn’t able to disconnect this wire from the header on the PCB so it looks as if it needs to be disconnected from the motherboard in order to remove the front panel completely. 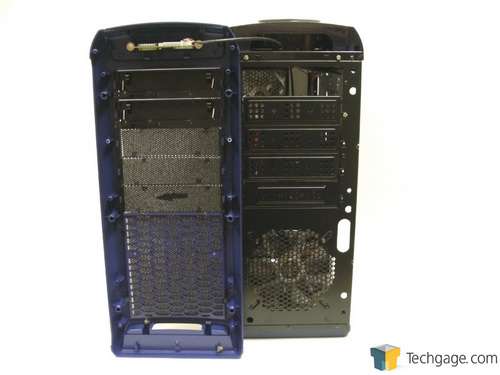 With the right panel off we get good view of the business end. At the bottom right are hard drive trays that are capable of supporting either 3.5″ or 2.5″ drives. Since the trays are spring loaded, they gently pop open when the red button at the front is moved towards the back of the case. Once removed, 3.5″ drives can be secured without tools by moving two hinged tabs on the right side out of the way, pressing the drive into the tray, and then moving both tabs back into position. 2.5″ drives will require tools and are secured with screws through the bottom of the tray. 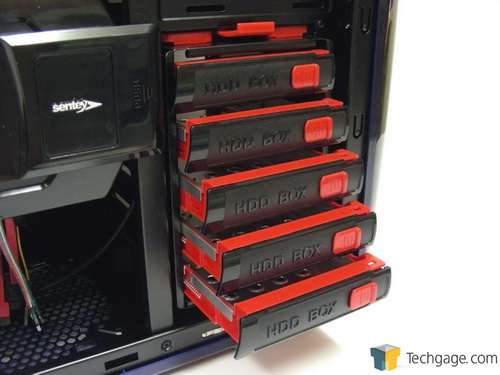 Users also have the option of removing the hard drive cage entirely by pushing down on the red tab above the top tray. The cage then simply slides out allowing users to work away but also gives access to two of the screws that need to be removed in order to take off the bottom panel to clean the air filter. 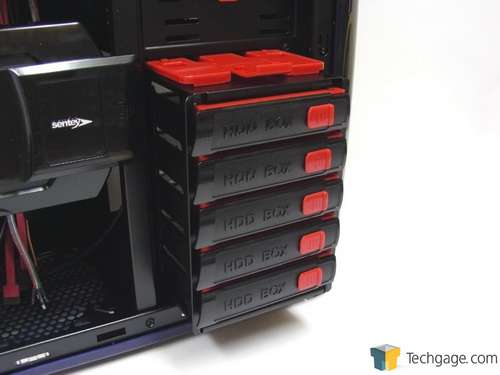 Above the hard drive cage are the four tool-less 5.25″ drive bays. The bay is unlocked by pushing down on the red tab and the black lock will pop up allowing the drive to be installed. Once it’s in place the lock can be pushed back down where it clicks and secures the drive. 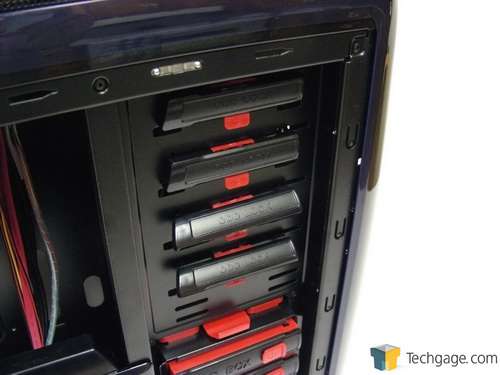 Moving back to the main section of the interior shows an arm with two 80mm blue LED fans mounted on the backside allowing air to be pushed directly to the GPU. 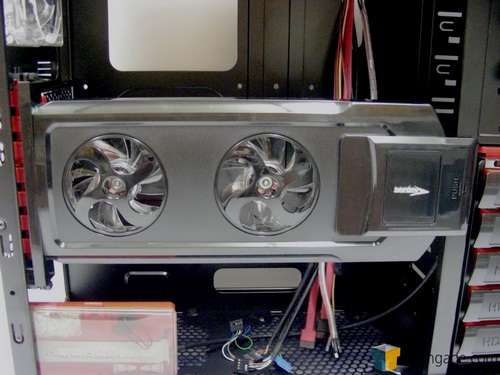 Pressing in to the right of the Sentey logo allows the arm to swing open and can be completely removed by pulling out near the top hinge. Both fans draw power from a metal contact pad on the left side meaning there are two less wires that need to be run through the case. Just below the arm is a small kit secured to the bottom of the case, but that will be looked at soon enough. 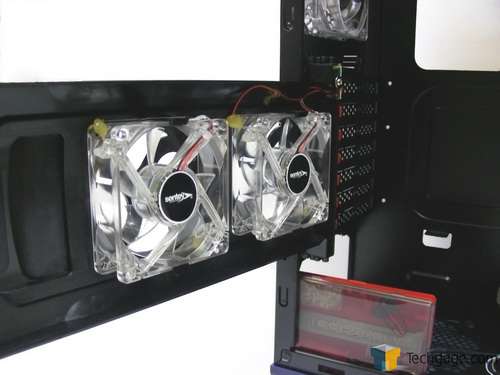 On the bottom are the openings for either a 120mm or 140mm fan to be added by the user and the opening for the power supply bringing up the rear. The power supply sits on two foam pads while the back rests against a foam gasket that runs around the perimeter of the opening to help absorb any vibration from the fan. 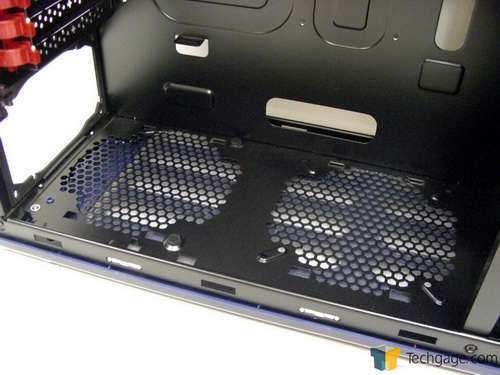 The motherboard tray sports a good amount of options for cable management. Down the right side are three large openings and one small opening to route power leads and data cables to the connectors on the motherboard while the opening at the bottom is for running power leads directly from the power supply. There is also a generous opening in the motherboard tray to help with installation of CPU coolers that feature back plates and another small opening in the top left corner to run fan cables and the 12V power lead. 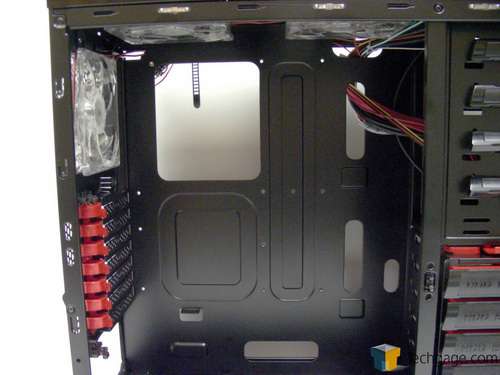 Looking at the rear of the interior shows the inside of the plastic “lock” (there’s those quotations again) to keep expansion cards in place. Above that are the 120mm exhaust fan and motherboard I/O opening. Way up top are the two 120mm exhaust fans that are a little oddly spaced. 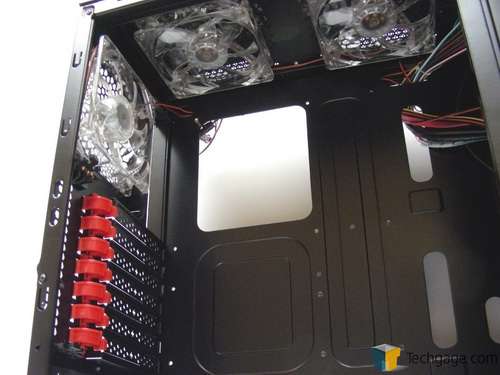 There isn’t too much happening on the back of the motherboard tray although Sentey has chosen to include four adjustable cable ties. These are stuck on using double sided adhesive pads and will allow cables to be secured against the tray. With a little over half an inch of clearance between the motherboard tray and the side panel these cable ties should come in handy. 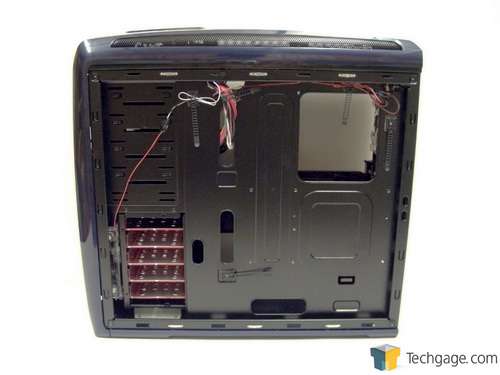 I don’t mention connections unless there is something new, unusual or missing. I’m happy to report that there’s nothing missing, in fact it’s quite the opposite thanks to the multitude of options that were covered when looking at the top exterior. What I wanted to show is the clear sleeving job that has been done on the power, reset, power LED and HDD activity LED wires. 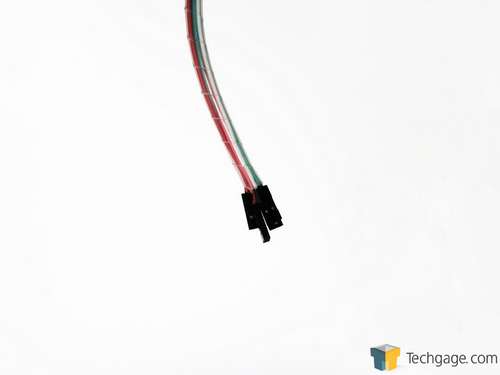 It’s now time to have a look at that kit that I mentioned earlier. Inside are a small screwdriver, two plastic motherboard standoffs, a spare, gray PCI slot cover, a speaker, and a bag containing brass motherboard standoffs and screws to secure the motherboard and power supply in place. There is also a small cloth included to help remove finger prints from the case seeing how the finish makes it a magnet for them.

In a separate bag are the user manual, product brochure and a mini-CD containing the driver for the card reader. A white box secured inside the case contains a spare SATA data cable and a SATA power extension lead. These are use for the hot swap connection on the top of the case. Rather than installing a drive into a hot swap bay, the cables are attached to the case and then to the drive in order to draw power and transfer data. 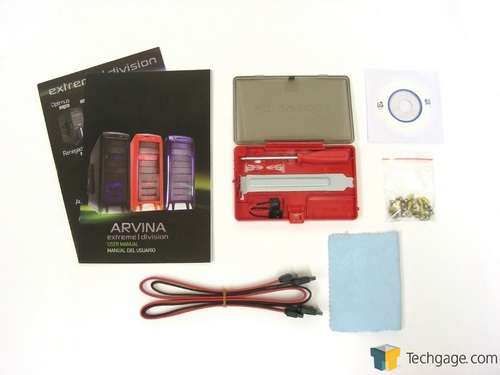 The Arvina series offers a lot of useful features, but if they aren’t functional users will run into some problems when installing their gear. That portion of the review is up next.