The answer to the previous question, for me at least, is “no”, this case really isn’t worth your hard earned dollars. This is simply due to the fact that some of the problems were quite major, even though it did manage to do a lot of things right.

All of the components except for the GPU installed as they were intended, there are tons of features, oodles of room for expandability, loads of room to work in and I think it looks great for the most part. Then there are bonuses like quick release latches on the side panels, the tool kit that can be secured inside the case and taken on the road as well as Sentey’s decision to wrap it up in a cloth bag to help with shipping.

Personally, I’d like to see this series re-launched, because there is nothing here that cannot be fixed and there are few companies that do this regularly. The PCI retention system can be replaced by the tried and true method of securing drives with screws and leaving out the current method all together while at the same time making the slot covers reusable.

Adding extra length to the audio cable would be even easier and for another couple of cents there could be some screws thrown in to mount 2.5″ drives seeing how many people buy OEM drives that do not come with hardware. I don’t feel that there should be reason why any of these problems are found in a case in this price range. 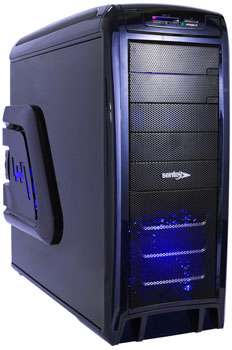 Speaking of which, the Arvina series of cases are priced at ~$145 putting it in direct competition with heavyweights like the Antec 183P, BitFenix Colossus and Cooler Master HAF 922, all of which are very solid both in form and function.

At its core, the Arvina series is an average case with average thermal performance that has above average looks and features but at an above average price, which at this point cannot be justified until at least the major issues are addressed.

July 5th Addendum: Sentey has contacted us to let us know that the Arvina is available at Newegg for $99 USD.