If you love the First Person Shooter genre like so many others, it’s not very difficult to find one to play. They are everywhere, which is usually not a good thing. Too many FPS means that developers will tend to copy each other, but not Croteam. Croteam strives to create a completely unique gaming experience, that can’t be found in many other FPS games.

A few years back when the original Serious Sam was released, it became an instant hit.. sort of. Basically, the people who didn’t like the game, simply passed over it and ignored it. Those who did enjoy the game though, enjoyed it a lot.. it almost has a cult following. The insane gameplay coupled with humor and great eye candy made the game such a hit among those who enjoyed it. 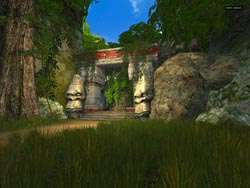 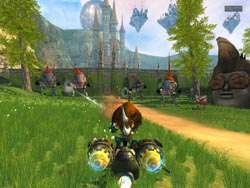 It’s been a couple years, and Croteam have obviously had more money to deal with this sequel.. because everything is amped up. As mentioned in the intro, this game easily proves to deliver all the ‘kill kill kill’ you could ever need. Without a doubt, this game has more killing in it than any other game I have played in recent years.

The game is built upon the appropriately named Serious Engine 2, which they claim to be 100 times more complex than the previous version. Even though it’s not a well known one, it’s obvious that it has some serious potential. These are not really state of the art graphics we are dealing with, but they are still amazing. While playing, I can’t seem to get the “Cartoony Far Cry” out of my head, because that’s exactly what the environments remind me of. As is easily seen in the pictures, everything about SS2 is clean and colorful, chalk full of pure eye candy. In fact, there were numerous times when I died due to oogling the graphics.

If you hate repetition, then the killing may be one thing that can turn you off. It’s great at first, but further in the game it does tend to get a little tedious.. especially since you can have dozens of monsters after you at a given time. It’s not all that bad though, because there are times when you can stop and admire the graphics.

The gameplay is extremely responsive and smooth in this game. I wish I could say the same about the key configuration menu, but I can’t.. it’s horrible. Trying to assign keys is a pure pain in the butt, and should have been made easier. At any rate, that doesn’t really have to do with gameplay. Once you finally are able to customize the keys to your liking, the game plays like a dream. 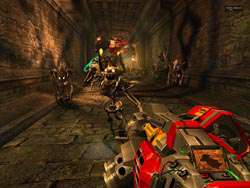 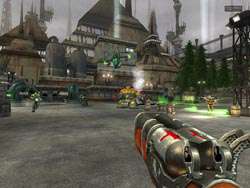 One feature that I liked is that you do not have to reload any of your weapons, which only makes sense due to the mounds of mobs that are usually out to kill you. If you play the game on the third to fifth difficulty level, you can expect some fun, and some constant confusion. I many times died by something I did not even see, but heard. Since the difficulty is notched up, you will get hit harder as well, and you can die quite easily if you don’t evade the creatures very well.

As for actually proceeding through the game.. it’s definitely not that difficult. It’s very straight forward for the most part.. just watch where the creatures are coming from. There are slight puzzles, but I do mean slight. SS2 is definitely meant for gamers who want constant action without having to think. To help you along even more though, you still have Nettie who will gladly give you hints or straight out instructions on what to do.

Oh.. there is one? Well.. there is something to do with some Medallion. Sam must traverse through the various worlds in order to conquer them to piece the Medallion back together. It actually reminds me a lot of Sonic Adventure for the Sega Dreamcast.. but it works. 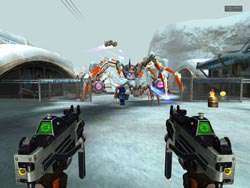 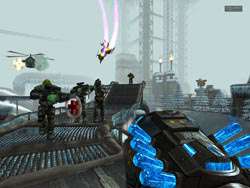 That sums up the story for the most part, because it’s all I actually know. The important thing is to not worry about the story, but just make it alive through each and every level. When exploring the gorgeous landscapes and firing your far fetched weapons, you won’t really care about a storyline. Of course, this is another reason why this is such a ‘jump in and go’ type of game.