What else about SS2?

One area that Croteam mastered is the weaponry selection. There are 15 weapons available to Sam at various points throughout the game, and damn are they fun to use! They have everything from a simple shotgun to a zap gun (think Halo) to a rocket launcher and even a cannon! The weapons all look fantastic and do serious damage.

One of my favorites were the simple grenades. You could shoot off a few rounds at a huge baddie, the finish him off with a grenade.. and he would explode! Blood and guts everywhere.. a great time!

The sound in SS2 is pretty well done, but a lot of the dialogue is corny. Of course, this game is supposed to be humorous, but even some of it is overboard. It will make you chuckle a few times though, guaranteed. There’s no music in the game, but there doesn’t need to be. Over all the constant killing you are doing.. you wouldn’t be able to hear the music anyway. Also, when you actually have a break from the killing, the dead sound will help you figure out where the next baddie’s are. Overall, the sound is nothing amazing, but it does the job.

One thing that strikes me odd in any new release, are cheap FMV movies in between the gameplay. Yes, FMV’s can certainly add to the experience, but the ones in this game were cheap looking, and the quality matches some FMV’s in games before the turn of the century.

What else can I say about this game? Even though I have found a lot of faults in the game, I still enjoyed it a lot. I have been waiting for this one since it was announced, and am not too surprised about the result. For pure fanbois of the first Serious Sam, there may be some disappointment, but overall it’s a fun experience.

The graphics are amazing, which adds a lot to the game. Serious Engine 2 supports HDR and is used in the game, although the bloom effect is a little overdone and some things appear way too bright at times. The environments and weapons are extremely well done, as are the mobs.. if you actually have time to look at them. 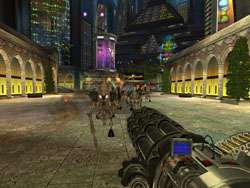 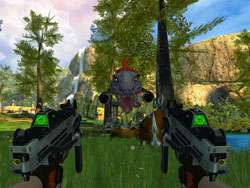 The sound could have used some work, and a music overtone would not have been complained about. Some of the sounds monsters make are classic though, especially depending on which weapon you choose to obliterate them with. Some of the humor expressed in the game is unlike most other FPS games also.

Even though some of the game could be improved a fair bit, it’s hard to really complain since this is a budget title, that retails for $29.99US ($39.99CAN). If you decide to buy the game, you will not feel as though you’ve wasted $30; you will get your fun worth for sure. After playing this one, I really hope to see a new SS in the future once again, and I am sure the fans will agree. Good job to Croteam for putting out a game that’s certainly unique, and fun to boot (although repetitious after a while!). I give this one a well deserved 8 out of 10. Seriously.

Feel like you have to talk serious now? Why not discuss this review in our related thread. Registration is not required, but welcomed. 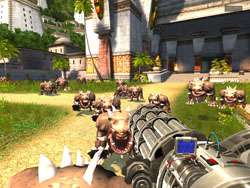 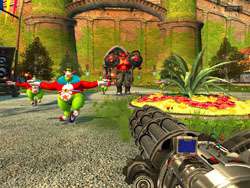 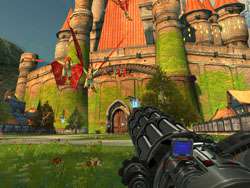 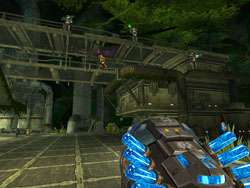 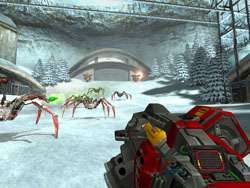 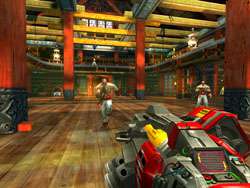