Should you buy Vista Ultimate?

With the Vista launch imminent, you may be wondering what version you should be buying. Thanks to the four primary versions available, this is no easy task. Many will be swaying towards the Ultimate Edition, but should you save your cash?

Vista is right around the corner after years of our incessant waiting. This is not an article to explain why you need Vista, because as it stands nobody “needs” it. In the future, when DirectX 10 and Vista-specific software is commonplace, that will be the time when the move will become more of a requirement. Until then, Vista is just a new version of Windows pimped up with a fresh coat of paint. This is an article to cater to those who -are- going to buy Vista regardless of whether they need it or not.

Although there are 8 different versions (at least), only four are targeted to the regular consumer. Home Basic is the barebones version that doesn’t include any of the special extras. Business is targeted for that specific audience but may be of interest to those who want better security but don’t require some of the more “fun” add-ons such as Media Center and Solitaire.

In this article though, I will be comparing Ultimate to what will likely be the most common version of Vista, Home Premium. As it stands, Home Premium will retail for $239USD while Ultimate will for $399. This is a huge price differential and the reason I became inspired to write this article. Its no secret… Ultimate is packed. It includes everything the three other versions do, with the addition of BitLocker. But as I examined things, I came to the conclusion that a fair percentage of people who shell out the extra $160 for the Ultimate Edition may not even use most of the extra features that are available.

Microsoft has done a good job of clearly explaining the differences between versions on their website, so I had an idea of what to look for. Quickly referring to that list, you can see that Home Premium is essentially what Windows XP MCE was, since it includes the full media center. The prime difference between Home Premium and Ultimate is that the latter includes better security tools and business apps.

What Home Premium does include assures me that it is indeed worth the $239USD price tag. I am not saying I am particularly pleased with Vista overall, because I have run into a good share of problems in the past few months since the RTM became available. The fact that it includes all of the games, media center and new Vista core programs such as Meeting Space helps it become a feature-rich OS out of the box. Granted we are now in 2007, but the Windows XP installation was incredibly bland. Vista seems to make up for this.

Of course, I am not getting into what Ultimate has that Home Premium doesn’t, so let’s soar through what you -would- be missing if you don’t get the $399 edition.

BitLocker is a key feature for the Ultimate and Enterprise editions; You cannot get them in the other versions at all. Because of this, it may be the prime reason you would want to slam down that extra cash, but is it worth it? Sadly, I wish I was able to tell you. I spent a good four hours working with BitLocker, or rather working to get it functional. To no avail. 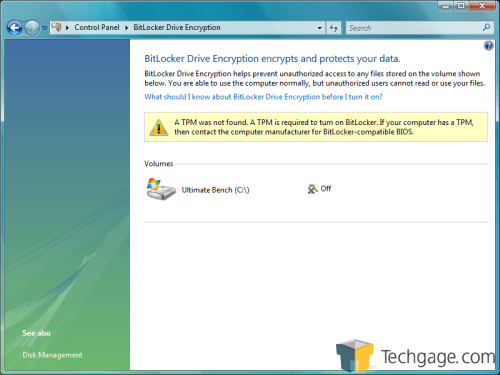 BitLocker is a program designed to ease the minds of corporate titans everywhere. How often do we hear news of an important laptop being stolen? At least twice a week. That’s where BitLocker comes in. It’s a full file system encryption program that locks up the drive entirely when the computer is shut off. That’s where things become interesting. In order to access Windows or the data, you -need- the key that coincides with the drive. When you first set up BitLocker, you will have the ability to save this key to a thumb drive. So, you plug in your thumb drive and are good to go. If you boot up without the key however, the computer will be completely non-functional, at least until another hard drive is installed, at which point you’d lose your data.

There are big pluses to this, but also downsides. Imagine for a second that you lost your thumb drive and your computer became completely inoperable. On the other side of the coin though, I don’t see this technology being designed for home users, but rather businesses. If a laptop gets stolen, then the data is safe. Not just their data, but OUR data most times. If a laptop or thumb drive is lost/stolen, then a new laptop could be purchased and the databases re-synced. 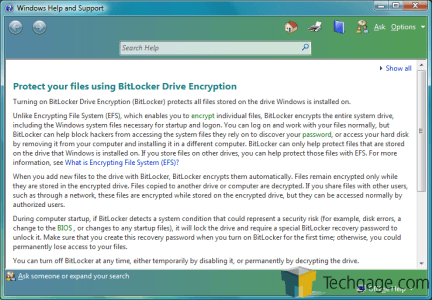 In a home scenario, a user would have to back up constantly to an external drive, which would somewhat defeat the purpose since that unencrypted hard drive could as easily become stolen like the rest of the computer.

The reason I can’t comment on the performance or ease of use is that I could not get BitLocker to function on the two computers I tested it on. I believe this is due to the fact that neither BIOS supported TPM which BitLocker requires. That’s why I am led to believe that this technology is directly targeted to laptops where such features are standard in a proprietary BIOS.

One thing you will want to realize is that if your BIOS does support TPM and you are ready to make the BitLocker leap, you will need to read through a LOT of documentation. There will be a fair amount of tweaking and partition creation. You would be wise to understand exactly how it works or else you may screw yourself over.