Should you buy Vista Ultimate?

With the Vista launch imminent, you may be wondering what version you should be buying. Thanks to the four primary versions available, this is no easy task. Many will be swaying towards the Ultimate Edition, but should you save your cash?

Remember the classic Plus! packs that Microsoft released alongside a launch of their new OS? The Plus! pack with XP was rather lackluster and didn’t warrant a purchase as far as I am concerned. What it did include though were a few additional mini-games, themes and other miscellaneous extras. Microsoft scrapped this idea with Vista, but instead are offering such bonuses to those who handed over their hard-earned cash for the Ultimate edition.

There are currently no Extras available, but Hold ‘Em Poker and a new application called DreamScene (Desktop video overlay) will be at launch. Past this, there is no telling exactly what we can expect from the Extras or whether or not it will be worth your time. Looking into the “About Ultimate Extras” screen, it will list off potential benefits that will come to you over time. First listed is cutting edge programs, which could include updated/new utilities or even games.

Innovative services is the second mentioned, but I’m unsure exactly what they mean by this. These could end up being special literal services that run on your system to help better performance, or maybe Microsoft has a special online suite of products on the way for Ultimate users. The last mention is the one that surprises me the most… tutorials. “Get the most out of Windows Vista Ultimate from tutorials that are available only through Windows Ultimate Extras.” Enough said.

Because none of these Extras are available through the RTM version of Ultimate at this time, it’s hard to comment on the usefulness and also the value that they can provide. This is a feature that Microsoft is really trying to push with Ultimate however, so it’s likely to blossom over time. In the future, I hope to see new themes, wallpapers and -good- games being released this way. If you are to shell out an additional $160 for this edition, it would be nice to reap the rewards. Although, I wouldn’t expect that much from it directly at launch. 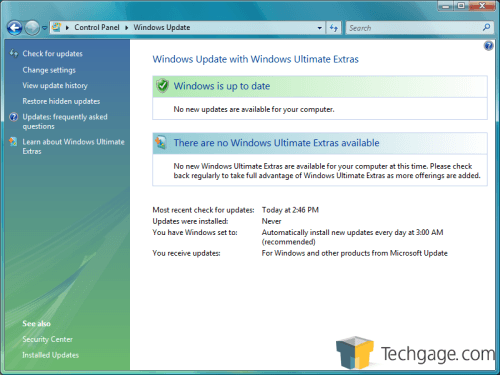 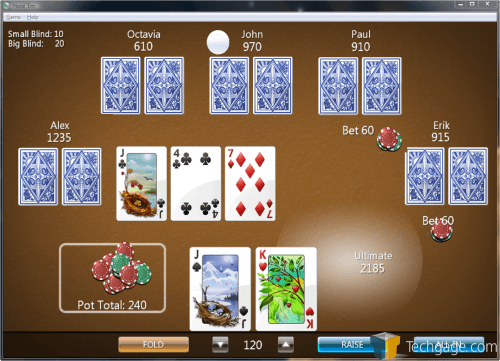 There may be a list of programs that each version of Vista has, but I couldn’t find it. So instead, I had one computer running Ultimate and the other running Home Premium and explored both at the same time to find the differences. I started with the Start Menu, to see what programs were missing in the Home Premium edition. There were only two primary menu entries that I found missing in the Home Premium edition. This is not to say that a few select applications act differently in each version though, like the Backup tool did.

Windows Fax and Scan is the first application I found that Home Premium lacked. You can tell by the title what the main purpose of the program is but as simple as it sounds, it could prove quite useful if you send faxes frequently. The main GUI resembles Windows Mail to some degree and acts similar as well.

Sending a fax is as simple as scanning the document and then sending it like an e-mail. You have the option to send via your Modem or through a remote server. Both of these options can be configured the first time you try to send a fax. You can also leave the application running to receive faxes as they come in. Since I do not have a Fax machine, I was unable to give the program a good test. However, I assume that you can still receive faxes at a later date if your computer is off at the time, assuming that the Fax machine has a queue and doesn’t delete the scan as soon as it’s printed out. 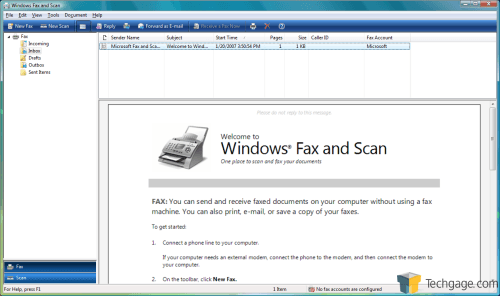 Found under the Extras and Upgrades submenu is the Small Business Resources, which is not actually an application but rather a link. It’s hard to consider this as an Ultimate exclusive, because the website that it launches is accessible by anyone. The website assumes you are running Vista Business, which you are in a sense since you have Ultimate. It’s an online Flash tutorial telling you how to make the most out of the OS if you are a Business user, so it’s one that most people will want to check out for that purpose. 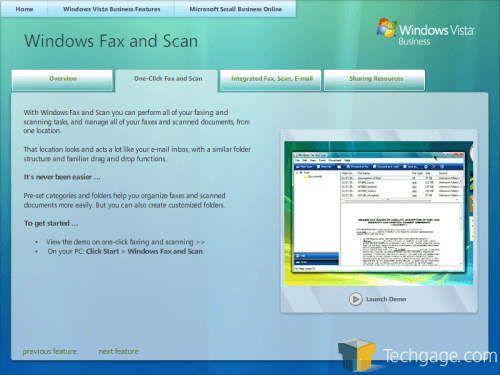 That’s all that can be said here… it launches a website. Strange to be included in a Start Menu as if it were a program, but I guess it’s better there than a link on your desktop.