iXtrema fans are the perfect complement to SilenX products in your system. Featuring a noise to airflow ratio that exceed the competition (including Papst, Panaflo or Blacknoise), these are the perfect fans for your silent PC. This fan comes with silicone composite fan vibration dampening mounts; no other fan on the market comes packaged with such mounts! Weighted stainless steel screws are included in case your mounting application cannot accept our silicone mounts. A 3->4 pin power convertor in included with every fan so you have the option of running it off the motherboard or the power supply, this is one amazing deal!

A lullaby and fingernails on a chalk blackboard are both sounds. To most
people, only one is noise. But to an antisocial grouch, both are noise.
Sound is a matter of fact and can be measured accurately with a good sound
level meter. Noise is a matter of opinion and, in general, cannot be measured
at all.

About fans: they have blades and they spin to shove air from here to there.
This necessarily produces sound; specifically the sound of air moving. This
is a benign sound to most people, meaning not noise. But fans have bearings
and such that produce mechanical sounds in addition to the air movement, and
most people consider that to be noise. 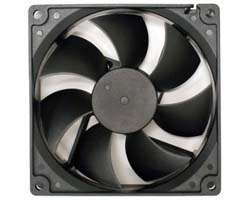 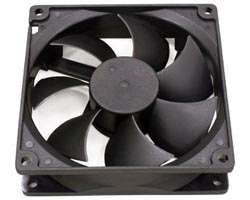 Obviously, a sound level meter cannot be used to measure this noise. The ear,
with the human brain, can. Not as an absolute measure, but as a comparison.
The human brain is very good at comparing two noise sources and identifying
which is noisier.

So I compared my new iX fans with three other 92mm x 25mm 7-blade fans: a
2100RPM Panaflo L, a 1750RPM Vantec Stealth, and a 1500RPM Nexus Silent. I
immediately tossed out the Panaflo; its sound volume overwhelmed everything.

Using the computer with the side cover removed as a power source, I carefully
compared the remaining two standard fans against the new iX fans. I’ve
learned not to unplug the chassis fan with the power on because the inductive
kick resets the computer, and could possibly do other damage. In these
comparisons, I turned the computer off and back on over 15 times.

I determined that the air flow – the CFM – of the Vantec and the new iXs was
the same, which is no surprise (1750 and 1800RPM). I also determined that the
sound (not noise) level of the iXs appeared to be the same as the 1500RPM
Nexus. This _was_ a surprise; in fact, it makes no sense since the 1800RPM
iX indisputably pushes more air. I’m saying that subjectively, the sound
levels were the same.

But the Nexus is speced at 19dBA and the iX at 14dBA! Wha? In my opinion,
SilenX is using a 3D spatial average to determine that 14dBA figure. Fans
produce almost all their sound and noise on-axis, with very little of either
off-axis. 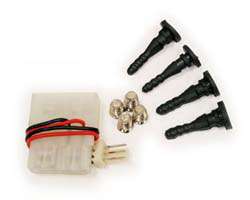 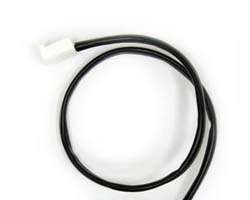 I’ve previously used the Nexus as a chassis fan in my In Win Z720T chassis
(two of them). It’s the quietest fan I’ve used, and also the lowest CFM. So
I mounted the iX fan and frankly, fell in love. I’m very critical of
mechanical noise in the chassis fan, but not in the CPU fan. And the iX
pushes more CFM than the Nexus and has absolutely no distinguishable
mechanical noise, to my ear.

I’m not critical of CPU fans because all my HSFs have the fan mounted facing
down, blowing air between closely spaced fins. This muffles the high
frequency sounds and noise produced by the CPU fan. The chassis fan is not
muffled at all.

So that’s the review, right? Wrong. At this point a giant ogre appeared from
left field.

I have the AMD Sempron 754 2600+, which uses little power. Idle power is
roughly 14W. To my vast surprise, I discovered my CPU’s die temperature, as
measured by the freeware program SpeedFan, was 156F! Yikes!

There ensued 36 hours in which I mostly tried to find out what had gone wrong
with my computer. Fortunately, I have two identical computers, which helped
with the troubleshooting. Or it did until I discovered the problem was on
both computers.

Yep, the problem was my new iX chassis fans. You see, they’re two-wire fans
with no RPM sense signal. And SpeedFan has a documented bug; it doesn’t like
zero RPM chassis fans (fan 1) because they cause temp1 and temp3 to read
incorrectly. Temp1 is the thermal diode on the CPU die.

So, being a retired electrical engineer, I kluged my computer so that the RPM
signal from my HSF is fed to both mobo fan headers, and the iX chassis fan is
powered direct from the PSU using the SilenX-supplied two pin to four pin
adaptor. Now I have really quiet chassis fans on both computers and SpeedFan
is working again.

It’s traditional for the reviewer to thank the supplier. So I’ll thank me,
because I bought those fans from the online store at Silenx.com.

Thanks a lot to Felger for submitting this review to us! Like the review? Have something to say? Feel free to leave a comment in our forums, where you do not have to register to post. If you have interest in submitting a review for possibility of publishing, please feel free to contact rob [.] williams [@] techgage [dot] com.