The installation is similar for Intel and AMD-based systems, except the retention arms will need to be swapped and the stock cooler mounts on AMD motherboards will need to be removed. After that it’s pretty much the standard mounting procedure of threading the long bolts through the back plate and up through the motherboard, and putting a plastic riser on each one. The block then threads over the bolts to sit on the risers and is secured in place using the included nuts.

Once the orientation of the radiator was corrected, the TD02 installed without any further problems. Normally we install our coolers with the hoses closest to the front of the chassis, but we had to reverse that when the mounting points on the fans wouldn’t line up with the holes on the top of the chassis due to clearance problems. This wasn’t a big deal, but then the hoses began to make contact with the rear exhaust fan. Oh sure, we could have put a grill over the rear fan, but we opted for the fast a dirty zip tie instead. Classy!

Have a look at our “hard work” below, but potential buyers should keep in mind that the radiator hangs down further due to the extra thickness. This could cause problems with power connections, tall MOSFET coolers, or even memory modules that are located towards the extreme top of the motherboard. Thankfully our test chassis has the mounting points against the far left side closest to the opening, so even though the cooler hangs down lower, it’s pulled away from the motherboard as far as possible. 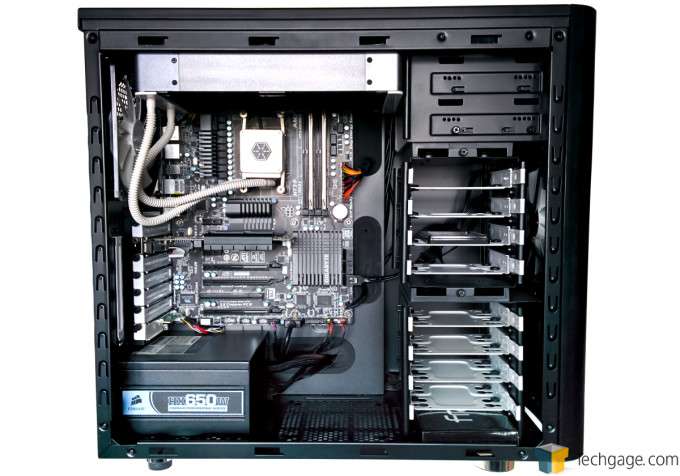 Stock CPU settings were obtained by using the “Load Optimized Defaults” option in the motherboard BIOS. The maximum overclocked frequency of 4.5GHz was reached by setting the clock ratio to x22.5 and increasing the voltage by 0.15v to bring it up to 1.4125v. Cool ‘n Quiet, C1, C6 and AMP have been disabled as well to ensure frequencies remain consistent. 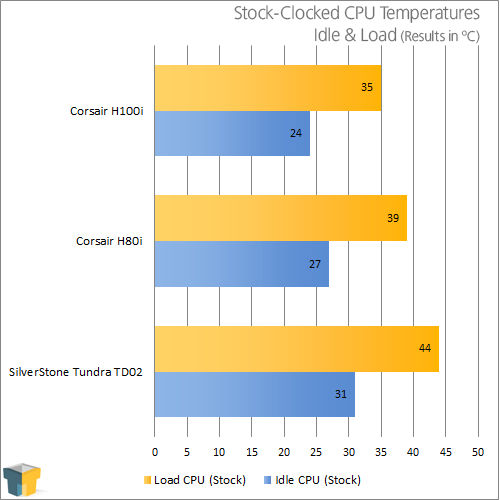 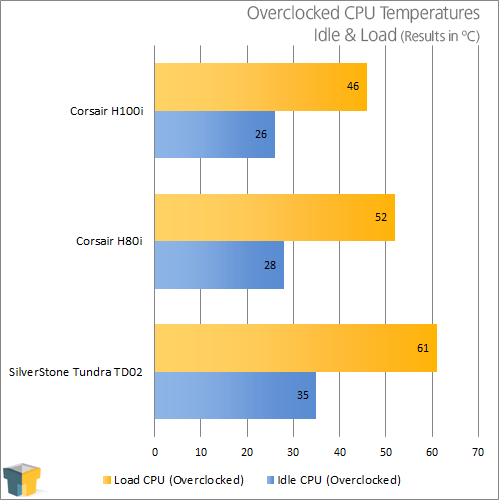 Things don’t look good as the TD02 consistently falls behind not only the H100i, but also the 120mm H80i. The temperatures were high enough to warrant a quick check that the block was making proper contact with the CPU. Since everything looked fine there, we figured it could possibly be the type of fans, so they were swapped out in favour of a pair of Corsair’s SP120Ls, which are used on the aforementioned Corsair coolers. This made absolutely no difference to the temperatures as the exact same numbers were recorded.

We had a look at the results on some of the other tech sites around the Web to see if they were reporting similar numbers, but none that were checked used an AMD CPU. We specifically chose this super-hot running processor over Intel’s frosty chips in order to separate the OK coolers from the fantastic ones, and we feel that it has done its job today.

Moving onto noise levels, the TD02 is quieter than the Corsair coolers with the fans running at full speed, which is how we perform all of our testing. Out of the box this seems to be a noise versus performance trade off, so those looking for lower temperatures will likely want to swap out the fans for something with a higher static pressure rating, but don’t expect the cooler to stay quiet.